Before Calvin and Hobbes!


A tip o' the hat to Earthbound Misfit for discovering this. Bill Watterson, the cartoonist behind the immortal Calvin and Hobbes, began his cartooning career long before the latter strip first appeared in 1985. A collection of his earlier work is available online. It makes for very entertaining viewing for those of us who fell in love with a little boy and his tiger, and through them with their creator. 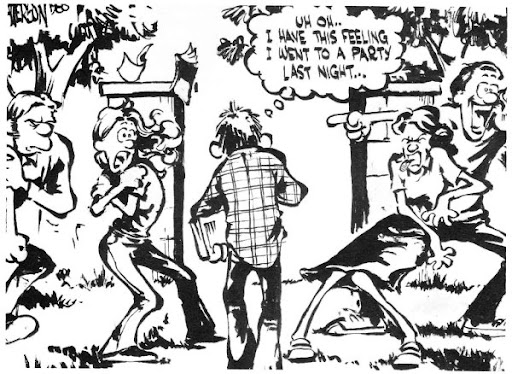 You can guess Bill Watterson was a college student when he drew this, can't you? 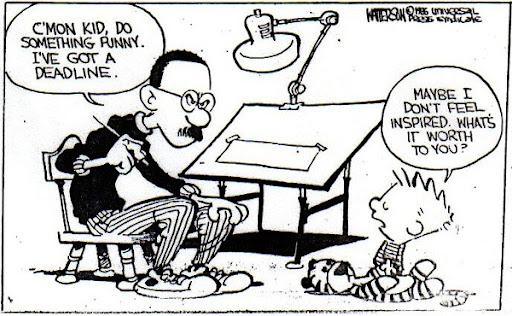 Some years later, shortly before Calvin and Hobbes arrived on the scene

I've always admired Bill Watterson for his artistic integrity. It took real courage and dedication to his art to walk away from one of the most successful cartoon strips in history, fifteen years ago, and begin anew. He pointed out in an interview earlier this year:

It's always better to leave the party early. If I had rolled along with the strip's popularity and repeated myself for another five, 10 or 20 years, the people now "grieving" for "Calvin and Hobbes" would be wishing me dead and cursing newspapers for running tedious, ancient strips like mine instead of acquiring fresher, livelier talent. And I'd be agreeing with them.

I think some of the reason "Calvin and Hobbes" still finds an audience today is because I chose not to run the wheels off it.

I've never regretted stopping when I did.

He's also consistently refused to permit merchandising of his characters, to my great relief. I think one of the worst aspects of American-style capitalism is the relentless drive to make money out of any and every aspect of anything. Thankfully, Mr. Watterson never succumbed to that: and perhaps precisely because of that, his strip remains as popular as ever.

Let's remember Calvin and Hobbes with real pleasure as, in their last cartoon, they ride off on their sled to explore an ever-new world. Thanks, Mr. Watterson, for the smiles, the memories, and the fun.

While I hated to see the end of C&H, I certainly understood the wisdom of Watterson's decision. When I landed in the hospital earlier this year due to extreme pneumonia, my husband brought me a couple of my big C&H books to while away the hours between nurse visits.

Calvin & Hobbes taught me the meaning of transmogrify. You can't put a price on that.

I agree with you entirely. I'm glad he stopped when he did.

Mr. Watterson is still writing and Calvin is now grown up.

Check out the comic "Frazz" and tell me that this is not Watterson writing about Calvin as an adult:

Here is the theory about Calvin being Frazz:

I'm happy to report that a new generation is devouring C&H books at the library.

He managed to put one of the core teachings of JPII's Fides et Ratio into a 4-panel strip one day.

Yes, indeed, he was good.

I never resented him for stopping Calvin when he did, though I missed the strip.

Not going on to do another major strip, however...

Calvin and Hobbes was a priceless treasure not only for the wit it contained, but even more for the wisdom it daily gave us.

I was terribly saddened, still am, when the strip ended, but I respected Bill's decision to retain his artistic vision and his own sanity.

Maybe someday C&H will come back.. until then I'm off 'exploring.'

Great homage to the master here, thank you -- especially for the link to Watterson's pre-C&H archive; I had no idea such a place existed. This promises to be fun.
And that last, valedictory comic?
Single. Best. Comic Page. Ever.
Still choke up, every single time. If there's any kind of heaven, and there's any justice in this 'verse, Watterson's place there is assured.
Cheers