Long-term readers may remember that about two years ago, I wrote about Peter Terren, an Australian doctor who experiments in his free time (and his home) with some truly outrageous electrical contraptions and voltages. For those who haven't heard about him, here's an Australian TV news report describing some of his earlier exploits.

The Sydney Morning Herald reports that he had a (very) bright idea to celebrate this Christmas.

Terren's Christmas projects are some of his favourites - last year he created a nine-metre high Christmas tree using lightning-like sparks from a tesla coil and long-exposure photography; this year he's strapped a Christmas tree to a bicycle with a front light that is so powerful it could be seen from the International Space Station with the same intensity as a bright star (when pointed at the sky). 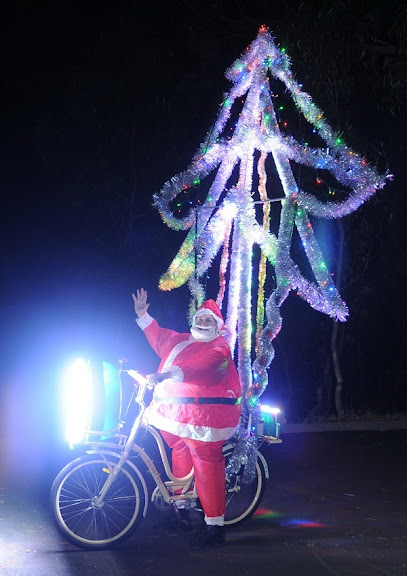 "I would love to send some Morse code to the International Space Station," said Terren, 54.

He has applied to Guinness for the "world's brightest bike light" record, saying he has done his research and, at 100,000 lumens, his creation is five times brighter than any other bike light he's seen.

"The current world record holder in Guinness looks pale by comparison," he said.

Terren said he got the idea for the project on one of his night-time bicycle rides. He does not own a car.

"I have had kangaroos jump out in front of me so this gives me the upper hand," he said.

His 2010 Christmas rig uses 18 high-powered 100 watt LED lights - 15 at the front and three at the rear to light up the tree. It is powered by three deep cycle industrial batteries weighing over 30 kilograms. 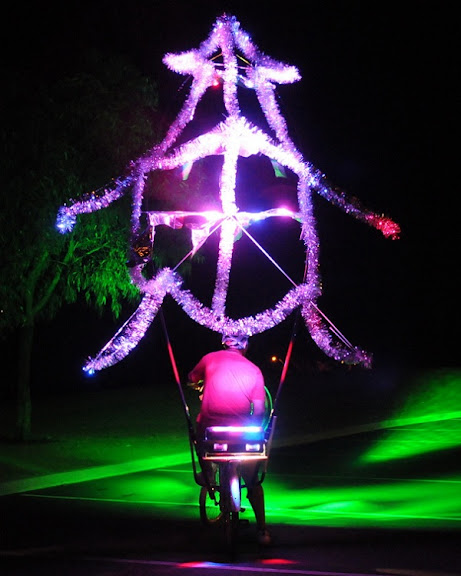 Terren was planning to ride it in his local Christmas parade but says "bureaucracy" and a lack of liability insurance prevented him from doing so. It's illegal to ride on the open road due to the light intensity.

There's more at the link. The photographs above were taken from Dr. Terren's Web site.

Isn't it fun to see such eccentric genius so happily at work? Talk about being enlightened!