The European Organization for Nuclear Research, known (from its French initials) as CERN, is celebrating a very successful 2010, and looking forward to a major upgrade. The Telegraph reports:

IT LOOKS like any other university corridor: ducts running overhead, bulletin boards on the walls, a collage of outdated Dilbert cartoons on a door. And then you notice a bronze plaque on the wall, bearing the phrase: ''Where the Web was born''. This unremarkable office, occupied by a middle-aged man in a white cardigan, used to belong to Tim Berners-Lee - and it was here, in 1989, that he put together the design for what became the world wide web.

Visiting CERN, the research facility outside Geneva that is home to the Large Hadron Collider, is a remarkable experience, not least for the constant juxtaposition of the astonishing and the mundane. Given its estimated £6 billion [about US $9.36 billion] cost, you expect either Bond-villain chic (scowling security guards, spotless lab coats, banks of flashing lights) or Silicon Valley casual (space hoppers, Segways, parkland).

Instead, the expensive stuff is buried safely underground, in the 27-kilometre tunnel around which beams of particles race at 99.9999991 per cent of the speed of light. Aside from the line of pylons stretching to Geneva - from where they draw half as much power as the rest of the city combined - the low-key, low-budget campus feels more like a provincial technical college than the home of the world's greatest minds. Indeed, when filming his Dan Brown adaptation Angels and Demons, director Ron Howard took one look at the control room and decided it would never do for Hollywood. 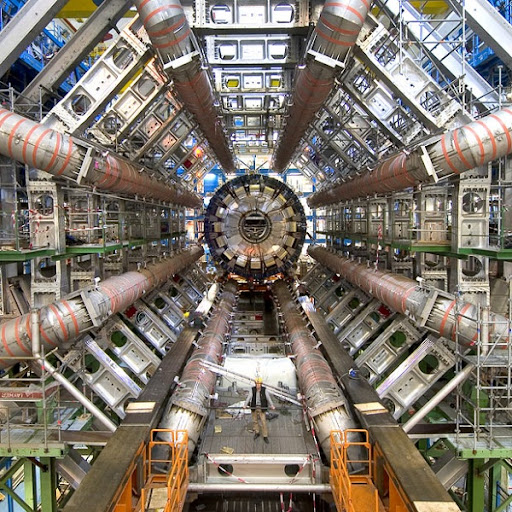 Similarly, most coverage of the Large Hadron Collider has focused on the astonishing machinery and the mind-blowing ambition that has driven the facility's creation. And, certainly, the facts are worth a little hyperbole. When, in November, the particle accelerator started smashing ions of lead together, the collisions were measured at 10 trillion degrees, mimicking conditions a millionth of a second after the Big Bang. At the current record speed, the particles travel the 27 kilometres 11,245 times every second. Atlas (A Toroidal LHC Apparatus), the largest of the four detectors that monitor the collisions, weighs as much as 100 empty jumbo jets, is half the size of Notre Dame, and generates enough data every year to fill a 6.4-kilometre stack of CDs. ''If you turned Atlas outward,'' says Dr Steven Goldfarb, one of the scientists who work on the device, ''it would be able to spot a grain of sand on Neptune.''

This year, they have calibrated the machine by rerunning experiments carried out elsewhere, to check that their model of the universe is working.

Now, they are edging into unknown territory: when the lead ions collided, the resulting ''asymmetry''(an imbalance in the explosion of subatomic particles) suggested the formation of quark-gluon plasma, the ''primordial soup'' of the universe at the time of the Big Bang. The experiments will continue next year, before a year-long overhaul to prepare the device for operating at 14 trillion volts, twice the current level, as the hunt goes on for the Higgs boson, aka ''the God particle'', and other strange dimensions, forces or symmetries.

So, to celebrate their success, the team at Atlas has come up with an unusual idea: releasing a charity album. The 3000 scientists decided to pool their musical skills to produce tracks from blues and rock to classical and folk. The result was Resonance, a surprisingly accomplished double album, the proceeds of which go to build an orphanage in Nepal. It was released earlier this month - "13.7 billion years to the day after the Big Bang!" claimed the press release - and the band names are packed with scientific humour: Goldfarb's group, the Canettes Blues Band, references both a local beer glass and another group from CERN, Les Horribles Cernettes (geddit?), whom he describes as "the first group to do really good physics music". 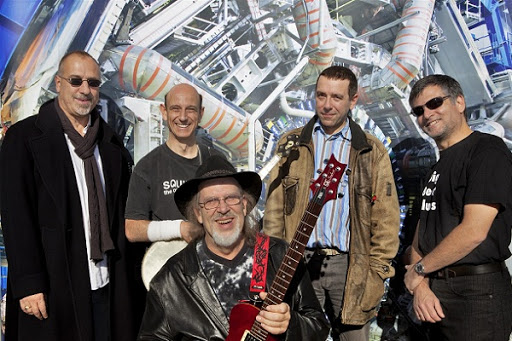 Yet while the Canettes' song Atlas Boogie is probably the only single ever to refer to liquid argon and muon spectrometers, most of the acts play it straight. Among the exceptions are two standout tracks, a belting torch song from Cat Demetriades called Sweet Cernoid, and a charming number by the TLA (it means Three-Letter Acronym) called Points of Order. The lyrics should strike a chord with any office drone: "When my wife gives birth, I'll be in a meeting/ And when black holes destroy the Earth, I'll be in a meeting."

Here's a video clip with more details about the CERN scientists' music, released by - inevitably - 'Neutralino Records'. (Well, what else would one call a company releasing the music of nuclear scientists?)

And here's a track from their album, the aforementioned 'Atlas Boogie'.

Sounds like a good time was had by all! It's a nice way to serenade the new scientific year.

Hey, thanks for the links to the videos. The only LHC song I knew was their rap song so this is nice.

It seems like a good deal, never mind that they seem to be doing something useful with the proceeds.

Maybe they should stick to the physics..haha!