Via Dustbury, we learn of a journalist who - at the request of her editors - agreed to live nude for a week.

Most people wake up in the morning and get dressed. Last week, I agreed to hop out of bed and not get dressed. I called it Naked Week.

I believe that a lot of things are better without clothes: Bubble baths, swimming under the stars, frolicking between the sheets. When it's time to cook dinner, scrub the tub or watch "The Big Bang Theory," I prefer to be wearing clothes.

I agreed to take it all off for a week in the name of journalism. At first, I was going to pass on the assignment. I had all sorts of excuses: How will I walk the dogs? What if the UPS man knocks on the door? It's too cold to be naked!

But I decided that it might be fun and thought I could learn something so I signed on. 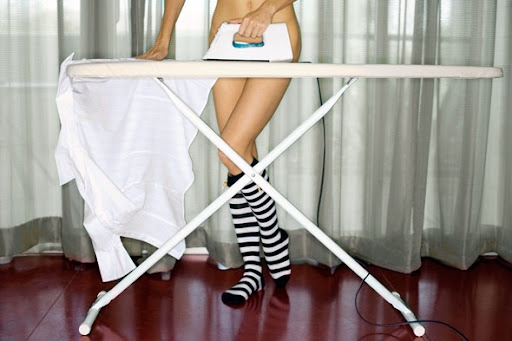 For an entire week, as long as I was at home, I was naked. I wrote articles, interviewed sources, washed dishes, paid bills and watched TV all while I was naked.

I counted the minutes until the naked experiment was over because there was something awkward about resting a bucket of suds on a naked thigh before setting it down to mop the floor or folding pants while wearing none. I found it downright comical when I stood in front of the fridge and searched for ingredients for dinner while staring at a cantaloupe and cucumbers! (Yes, being naked gave me the mindset of a prepubescent tween).

If Naked Week taught me one thing, it's that I need to work on being more comfortable in my own skin, even if it is in dire need of moisturizer. I might start sleeping naked or doing the weekend crossword puzzle in the buff. But for now, I'm off to put on some pants.

I'm afraid I just don't get it. Would someone please explain to me what, precisely, this stunt was supposed to achieve? What journalistic imperative was served by a week's nudity at home? In what way was this particular journalist's career enhanced, or skills developed, by doing so?

Now, if they'd put the whole thing on pay-per-view TV, I could have figured out the reason at once - money! Of course! But as it is, it seems to have been a monumental waste of time . . .

"Would someone please explain to me what, precisely, this stunt was supposed to achieve?"
I just wasted a couple of minutes trying to think of a good explanation. I got nuthin'. I did note that she mentioned dogs, not cats;I wonder if she'd scoop a litter pan naked. Ick.

It all makes sense when you realize people watch the news for humor and watch the cable comedy shows for news.

Cybrus -
I do believe you have forced on me, an epiphany.
It is all much clearer now!

At the bare minimum (see what I did there), they could have had something useful like,"Don't fry foods while you're not wearing clothes."

well it kept her home for a week and out of everyone's hair?

I can see where it would have been an eye-opener for her; a lot of very ordinary people have embraced nudism. However, she didn't get it, and it's pretty obvious she wasted her time.

I didn't happen without pictures.
We need photos.