The famed movie director, producer and screenwriter, Blake Edwards, died yesterday at the age of 88. 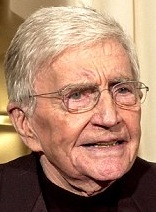 He was renowned as a master of slapstick comedy, and was responsible for some of the funniest and most entertaining movies of the past half-century. I grew up with them, and still watch them with great enjoyment. The Pink Panther series (excluding the latest two post-Blake-Edwards abominations, of course); The Great Race; (which memorably - and hysterically - included what's been called "the largest pie fight in cinematic history"); Operation Petticoat; I've laughed at them all, and will do so many times in future, I'm sure.

In its obituary, the Los Angeles Times points out:

"He hasn't quite made it into the pantheon of great directors," said Wasson. "People don't really know where to place Blake Edwards because so much of his material is outwardly goofy, even though it's sophisticated."

And while Edwards had as many flops as hits, Wasson said, "I position him along the line of Hollywood's greatest directors of comedy, beginning with [Charlie] Chaplin and continuing with [Ernst] Lubitsch, [Preston] Sturges and [Billy] Wilder.

"He was certainly the last great writer-director of mainstream Hollywood comedy."

In memory of this master of comedic mayhem, here are a few clips from his films. First, the trailer for 1959's 'Operation Petticoat'.

Next, the pie fight from 1965's 'The Great Race'. It really doesn't work well in small size, so I recommend watching in full-screen mode if you can.

Next, a montage of slapstick moments from some of the Pink Panther movies of the 1970's.

Such comedic genius is rare. May he rest in peace: and sympathy, too, to his widow, Julie Andrews, and his children.

This is a paragraph from Blake Edwards obit in the NYTimes. It seems that he was drawing from his own experiences for his comedy.

A lifelong depressive, Mr. Edwards told The New York Times in 2001 that at one point his depression was so bad that he became seriously suicidal. After deciding that shooting himself would be too messy and drowning too uncertain, he decided to slit his wrists on the beach at Malibu while looking at the ocean. But while he was holding a two-sided razor, his Great Dane started licking his ear, and his retriever, eager for a game of fetch, dropped a ball in his lap. Trying to get the dog to go away, Mr. Edwards threw the ball, dropped the razor and dislocated his shoulder. So I think to myself, he said, this just isn't a day to commit suicide. Trying to retrieve the razor, he stepped on it and ended up in the emergency room.

"Do you have any experience with needles?" "I used to be a junkie."
"Would it ruin your amateur standing if you helped me...?"
- SOB