I hadn't, until a Dutch reader of this blog e-mailed me with a couple of links to videos. Fierljeppen is a traditional Dutch and Frisian sport, and is also known as canal-jumping. Wikipedia describes its origins as follows:

The sport is believed to have originated with farmers who used poles to leap over small water drainage channels to access different plots of land. In East Frisia this sport is known as Pultstock-Jumping. Today the sport is primarily practiced for fun or to entertain tourists, but there still is an official annual National Fierljepping Manifestation (NFM) in the Netherlands, and championships are contested in six leagues and numerous clubs. 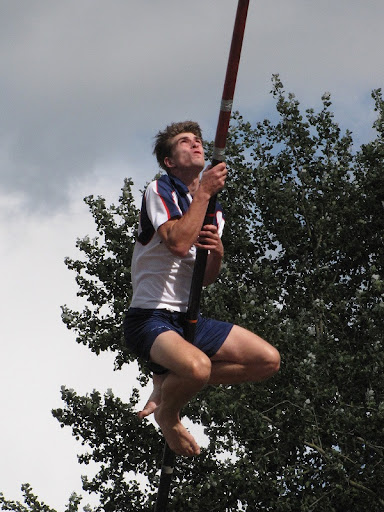 A sports Web site has this to say about fierljeppen:

The long aluminum poles is between 3 and 5 m long and has a flat round plate at the bottom to prevent it from sinking into the muddy canal bottom. The contestants run and jump onto the pole, then a shimmy to the top of the poles (some with the aid of bicycle inner tubes strapped to their feet), and then vault off to try and land on the opposite bank.


It certainly looks challenging - more so than conventional pole-vaulting, certainly, particularly as there's no padded area on which to land! I wonder how many participants are injured by landing awkwardly? Still, it seems that everyone's having a good time.

The origin of the sport is probably older than what's described by Wikipedia.

In written accounts from the Viking era there are people competing in "pole jumping" and reaching 7-8metres. The word used is the same as the scandinavian word for olympic sport, but since it's extremely unlikely that people vaulted that high back then, it's believed by many that they measured the length rather than the height, and that it's the same basic sport as this is.

The fact that many vikings settled in the Netherlands area makes it not a far fetched idea that the first farmers that jumped over canals were actually Vikings.

I'm sure that I have seen the same sport in the south of the UK. As the region had dug canals for the purpose of defense from invasion, I suspected that the ability to easily cross your own canal was a martial art.