The Daily Mail reports that hidden letters and numbers have been found in Leonardo da Vinci's famous painting, the Mona Lisa.

Intrigue is usually focused on her enigmatic smile. 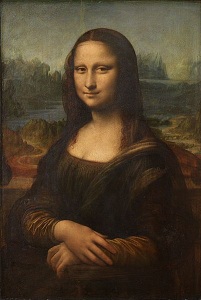 But the Mona Lisa was at the centre of a new mystery yesterday after art detectives took a fresh look at the masterpiece – and noticed something in her eyes.

Hidden in the dark paint of her pupils are tiny letters and numbers, placed there by the artist Leonardo da Vinci and revealed only now thanks to high-­magnification techniques.

Silvano Vinceti, president of Italy’s National Committee for Cultural Heritage, which spotted the symbols, said: ‘To the naked eye the symbols are not visible but with a magnifying glass they can clearly be seen.

‘In the right eye appear to be the letters LV which could well stand for his name, Leonardo da Vinci, while in the left eye there are also symbols but they are not as defined.

‘It is very difficult to make them out clearly but they appear to be the letters CE, or it could be the letter B.

‘You have to remember the picture is almost 500 years old so it is not as sharp and clear as when first painted.

‘From the preliminary investigations we have carried out we are confident they are not a mistake and were put there by the artist.’

There's more at the link, including photographs of the alleged discovery.

Whether those are letters and numbers, or simply scratches left over the centuries that the painting's been on display, is a matter of opinion, I guess. Certainly I don't place any credence in the 'da Vinci Code theory' that's been exploited by so many people for entertainment and profit. However, there's no official word as yet on whether the discovery represents evidence that Leonardo created the Mona Lisa as a paint-by-numbers exercise . . .