There's a bumper crop of other bloggers' entries, articles, posts and links this week.  Here they are,  in no particular order.


Joe Martin's Ghost claims that the banks are 'Stacking Fraud Like Cordwood'.  It's hard to argue with that headline when Washington's Blog posts a long list of crimes and improprieties committed by big banks, and also notes that some banks may have been - possibly still are - raiding allocated gold accounts.  In other words, customers who believe that physical gold bullion is being stored in their name by the banks may be shocked to find that the banks have stolen filched misappropriated it for their own purposes.  If this reminds you of the MF Global scandal, I'm not surprised!


Tranquility Lost offers what might best be described as the kid antidote of the day.  Good for a laugh!


Whiskey And Gunpowder, which is more of a financial site and newsletter than a blog, nevertheless has a very interesting article titled 'The Day Your Life Fell Apart'.  It examines the bitter consequences of government over-regulation.  Here's a brief excerpt.

All these seemingly small regulations may not seem like much in ordinary times. But in extraordinary times, they can make the difference between life and death. A natural disaster we can deal with. A man-made disaster such as that imposed by thick layers of crufty, enterprise-destroying regulations are a far greater problem because they are permanent, cumulative, and imposed at the point of a gun.

The regulators play with our products and our lives as if they know better than we do what’s good for us. To the political class, there’s nothing quite as satisfying as managing the lives and property of others. But when the unexpected happens, the mischief they do begins to reveal terrible things. Suddenly, the denial of our freedom to manage our own lives matters a great deal.


There's more at the link.  The Silicon Graybeard has another very good article on the same subject.  Both are well worth reading.

Perhaps the quote of the month on what government is good for comes from Coyote Prime at Running Because I Can't Fly.  Go read.


The Feral Irishman (WARNING:  site not always safe for work) has a fascinating article about 'Strange Weapon Concepts From The Past'.  Here's one example. 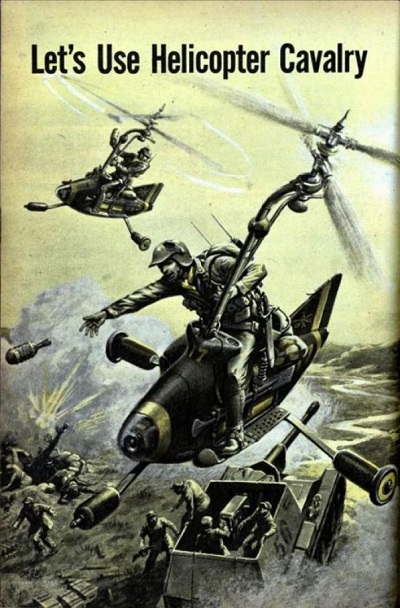 There are many more at the link.  Intriguing reading.  I mean . . . who came up with these daft ideas, anyway?


Warren Meyer, writing at Coyote Blog, fisks what he calls 'one of the most irresponsible [economic] suggestions I have seen in a while'.  I couldn't agree more!

In similar vein, W. C. Varones points out that we're spending plenty on education - we're just not getting any value for our money.

Finally, if we keep on spending too much money on the wrong things, the Survivalist Blog offers 'A Comprehensive Supply List for Economic Collapse'.  It's quite useful as a checklist to see how far advanced your preparations are (or aren't).  Food for thought.


Old NFO has two useful and timely posts.  One warns of the danger of counterfeit CR123 batteries, used in many modern electronics.  The other links to an article about the first photograph ever put up on the World Wide Web.  It's an interesting story for those who feel nostalgia for the 'good old days' of computing.


Discover Magazine's 'Bad Astronomy' blog covers 'The 50th anniversary of Starfish Prime: the nuke that shook the world'.  It's a very informative look at an atmospheric nuclear test that introduced the world (the hard way) to the dangers of electromagnetic pulse effects.


The ever interesting Dustbury has two links for us this week.  One takes us to what the author calls an 'Ancient Numbers Page'.  If you've ever wanted to express 99 and nine-twelfths in Roman numerals, this site will do the conversion for you (and also into Latin, Arabic and Greek notation).  The other links to Clayton Hove's 'Ad To The Bone' blog about advertising.  Mr. Hove tells us of the time one of his Tweets led to an amusing and thoroughly researched reply from a car company.  Great fun!


In an older post I found through a random Internet search, The Top Two Inches blog lists '35 aphorisms on liars and lying'.  Most of them are new to me.  Intriguing!


Last but by no means least for this week, Uncle Jay brings us a (not entirely safe for work) generic cover for modern woman's magazines.  A sample headline from the cover:

SEXY TOUCH:  Tickle His Prostate With an Egg-Beater

Thanks for the reference to my blog.

Thanks Peter, and a GOOD collection! :-)