"The Single Most Important Thing to Know About Today's Economy"


That's the subject line of an e-mail I received from Casey Research today, advertising their forthcoming 2012 Fall Summit conference.  It linked to an excellent transcript that's one of the most concise and accurate summaries I've ever read of the key economic problem facing the USA and the world today.

Despite the fact that it's part of an advertising campaign, I'm going to recommend unreservedly that you either read the whole thing (with particular emphasis on the graphs illustrating what's been going on), or watch it in TV form (which is a bit boring, as it's just a voice-over reading the text of the article and showing the figures).  The 'meat' is in the first half of the transcript, or the first 11m. 24s. of the video.  You can skip the rest, which is advertising for the conference.

If you want to read a few main points, here are some excerpts to whet your appetite.

Never before in history have so many governments simultaneously engaged in such extraordinary levels of irresponsible spending.

And never before have the debts resulting from that spending been so extreme on a global basis.

... the cause of all this debt has been an extraordinary increase in government spending at all levels.

Over the past fifty years total federal, state and local government spending here in the United States has steadily crept up to where it now represents over 40% of GDP.

And it is poised to only get worse worse: With the passage of Obama care, the government’s share of the economy is expected to grow to the point where it tops 50%.

Let that sink in a bit.

The majority of the economic activity in the United States, purportedly the bastion of free markets, will soon be under the direct control of the federal government.

Of course, governments don’t actually produce anything, so the role they play in the economy comes at the expense of the free market, and by deficit spending. 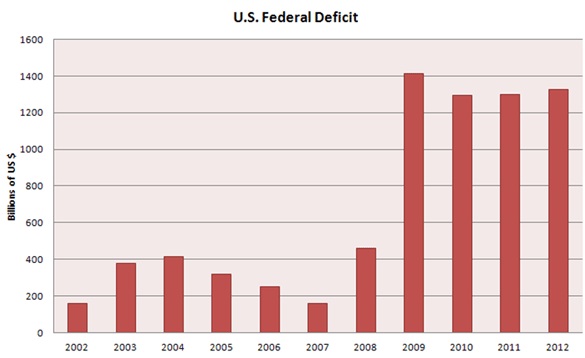 As you can see in the chart here, in the United States the deficits have reached previously unimaginable levels – over $1.2 trillion annually. And even according to the government’s own projections, the deficit spending will continue at these levels for many years to come.

But what happens when foreign buyers stop buying a sufficient quantity of U.S. Treasuries, as has been the case in numerous occasions in recent years?

Simple, the Federal Reserve Bank, or Fed as it is more commonly referred to, has stepped in to purchase U.S. Treasury bills directly or indirectly. In short, working closely with the U.S. Treasury, the Fed will do whatever it takes to keep interest rates from rising. That’s because once interest rates rise on the trillions of dollars in debt, the whole house of cards will come crashing down.

In the meantime, savers who rely on the yields they earn are being hugely disadvantaged by the government’s suppression of interest rates. Just this morning I reviewed the statements of a relative and calculated that his annual interest income came to just 80 cents on each $1000 he has on deposit at the bank.

Unfortunately, the problems of a politicized economy are not just fiscal or monetary in nature.

To varying degrees, it is this ... trend towards central planning at the expense of the free market that is plaguing all of the major world economies.

And when you layer on the costs associated with complying with bureaucratic regulations, the indirect costs of the government’s dead hand on the economy soar. 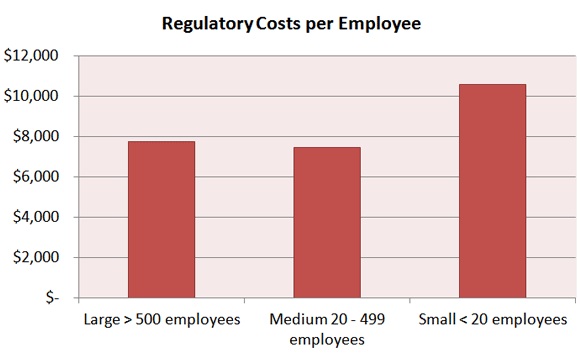 As a consequence, today's high unemployment numbers are likely to persist. In fact, as governments deepen their involvement in the workplace, and new more efficient technologies become available, unemployment is likely rise to a permanently high plateau.

The situation is exacerbated by a dangerous demographic reality, especially in many of the aging western democracies, with the number of aging citizens ballooning, placing ever greater demands on healthcare and government pension schemes and leaving a smaller population of younger workers to pick up the tab.

Thus, globally, we have historical levels of sovereign debt and deficit spending, a demographic crisis, and a structural problem in terms of unemployment.

Now, believe it or not, I’m not trying to worry you – but rather to make the key point of this presentation. And that point is that the situation is serious, and that governments around the world will do everything in their power – and today they have a LOT of power - to maintain the status quo.

It is this fundamental reality that has been driving the political takeover of our economies.

To put this point perspective, consider for a moment the right thing to do to foster much needed economic growth. The right thing to do is to set the free market free again by dramatically reducing the role government’s play in their respective economies, starting by slashing government spending and regulation.

The free market is, we would contend, the only way to wipe out the malinvestment and misappropriation of resources that has brought us to this challenging point in history.

Of course, reducing the role of government is easier said than done. Thanks to state run schools and propaganda, the average person now believes that government is the best way to solve any and all problems encountered in a modern society.

When times get tough, therefore, people don't expect nor do they want their government to do less for them... they want it to do more. The recent riots in Spain and elsewhere were not caused by individuals in favor austerity, but rather by people wanting the government to spend more.

This gives rise to a catastrophic conundrum. Do the right thing and trigger an economic depression and social unrest, or do the wrong thing and kick the can down the road to the point where a truly serious collapse becomes almost inevitable.

Without a doubt you can expect today's politicians to make the Faustian bargain of trying to pay their obligations through money creation and by launching all manner of schemes to avoid the consequences of their actions.

It is important to recognize that we are living in a new reality – a new economy where markets operate at the convenience of a central planning government. This is not arm waving, but a straightforward statement of fact about the world we now live in.

I think this is one of the most useful (and accurate) summations of our economic mess that I've ever read.  Apart from the advertising content, I think it's indispensable reading.  It squares with forecasts for the short- to medium-term future by authorities such as Prof. Nouriel Roubini (whose article at the link I also recommend) and others.

I'm not being paid by Casey Research to say this, and I'm not going to be attending their conference - but you need to read the full report, and pass it on to your friends.  It's that good.

Just to pass this on to you peter, Obama likely has no clue about the economy in part because he is no longer briefed on it .
http://yidwithlid.blogspot.com/2012/07/obama-hasnt-received-his-daily-economic.html