Today's winner is from England.

A MAN spent half an hour impaled on iron railings and survived - years after he had a similar mishap as a child.

Lucky Richard Bamber, 37, suffered the agonising ordeal as he attempted to scale an 8ft fence. 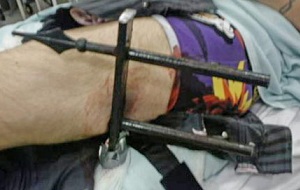 The auto factory worker was left dangling by the thigh after he misjudged a leap over the fence and was speared by the spiked railings.

Richard, from Birmingham, spent the next 15 hours with the railing embedded in his leg while doctors figured out how to remove it.

The railing was mere inches from several major arteries and could have pierced a vital organ - but after a one-hour operation to remove it, Richard was able to return home.

Incredibly, this is not the first time Richard has impaled himself on an iron railing.

He was speared through the armpit at the age of just five in a shockingly similar accident.

But the part-time DJ clearly hadn’t learned from his ordeal - and decided to attempt climbing an 8ft security gate this weekend after a night of heavy drinking.

He said: “I was a bit drunk and I just took a look at this fence and thought, ‘Yeah, I can make that’.