The very useful Aviastar Web site bills itself as 'All The World's Rotorcraft'.  It has many fascinating details of helicopters past and present from around the world.

To illustrate its breadth of information, among the listings is a very interesting catalog of European helicopters built between 1907 and 1935.  Here are a couple of examples. When it rose vertically from the ground with its pilot in the late summer of 1907, the Gyroplane No.1 built by Louis and Jacques Breguet in association with Professor Charles Richet had to be steadied by a man stationed at the extremity of each of the four arms supporting the rotors. It cannot, therefore, take the credit for being the first helicopter to make a free flight, even though the ground helpers contributed nothing towards the lifting power of the rotors; but it was the first machine to raise itself, with a pilot, vertically off the ground by means of a rotating-wing system of lift.


There's more at the link, and in an article about its successor, the Breguet-Richet Gyroplane No. 2 of 1908. Wikipedia has a short article about them, and Flight Global published an article earlier this year mentioning them in the context of the French Helicopter Association's celebration of 100 years of rotary-wing aircraft.

The 1360kg [2,992 lb.] empty weight machine used a single 18m [58½ feet] rotor. Propellers at the rotor tips produced torqueless rotation and were powered by a 230hp Bentley BR-2 driving transmission shafts that ran down the length of the rotor blades. Compressed air was used to control the rotor pitch angle, effecting translation through cyclic control. Tethered flights were conducted during 1924 in a hanger with free flights the following May. Power was sufficient to lift four "passengers" when tethered, but stability and control were still very poor. Over 80 take-offs were made, but the maximum altitude was only 2.4m [just under 8 feet] and maximum distance only about 183m [just under 600 feet]. The machine crashed in 1926, ending the tests.


Again, more at the link. An interesting short biography of Mr. Brennan may be found here. He was an avid inventor and experimenter in many fields.

Of course, none of these early aircraft could be considered successful helicopters;  but they paved the way for more successful designs to follow.  The first helicopters to actually prove themselves as viable, capable aircraft were the German Focke-Achgelis Fa 223 and the American Sikorsky R-4, both of which saw service in the latter part of World War II. 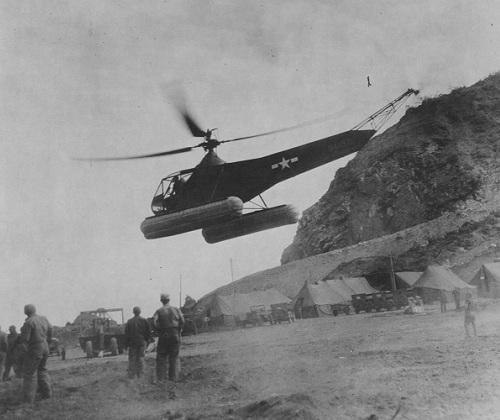 I recommend the Aviastar Web site to all aircraft aficionados.  It contains some fascinating material.