Last year I wrote two articles noting that unions were far and away the biggest donors and spenders in US politics.  It appears I didn't know the half of it!  The Wall Street Journal reports:

Organized labor spends about four times as much on politics and lobbying as generally thought, according to a Wall Street Journal analysis, a finding that shines a light on an aspect of labor's political activity that has often been overlooked. 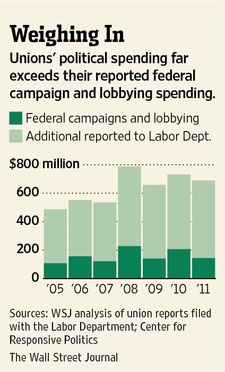 The new figures come from a little-known set of annual reports to the Labor Department in which local unions, their national parents and labor federations have been required to detail their spending on politics and lobbying since 2005.

The usual measure of unions' clout encompasses chiefly what they spend supporting federal candidates through their political-action committees ... and lobbying Washington ... These kinds of spending ... totaled $1.1 billion from 2005 through 2011, according to the nonpartisan Center for Responsive Politics.

The unions' reports to the Labor Department capture an additional $3.3 billion that unions spent over the same period on political activity.

The costs reported to the Labor Department range from polling fees, to money spent persuading union members to vote a certain way, to bratwursts to feed Wisconsin workers protesting at the state capitol last year. Much of this kind of spending comes not from members' contributions to a PAC but directly from unions' dues-funded coffers. There is no requirement that unions report all of this kind of spending to the Federal Election Commission, or FEC.

The Labor Department data show about 3,000 local unions, their national parents and labor federations reporting at least some spending on politics and lobbying each year since 2005. Just 35 unions accounted for more than half of it, according to the Journal's analysis.

Unions confronting threats are among the biggest political spenders. The American Federation of State, County and Municipal Employees—which lost 77,000, or about 5%, of its members in 2010 and 2011—has faced job cuts by cash-strapped local and state governments as well as challenges to bargaining rights from governors, such as Wisconsin's Scott Walker.

Faced with challenges such as these, the union's national headquarters boosted its spending on politics and lobbying to $133 million in the 2009 and 2010 election season, nearly twice the $75 million it spent in the 2005 and 2006 cycle.

The AFL-CIO has been hit hard by the changing economy and losses of manufacturing jobs. Membership of unions that belong to the federation fell to 11.6 million in 2011 from 13.7 million in 2005.


There's much more at the link.  Bold print is my emphasis.  (The article was open to general viewing when I read it today, but may disappear behind a subscription firewall in future.)

It's a fascinating piece of investigative journalism.  One must congratulate the Wall Street Journal on ferreting out an aspect of US politics that's flown 'under the radar' for far too long.  The vituperation directed against the Supreme Court's 'Citizens United' decision now becomes much easier to understand.  Those opposing the decision (almost universally on the Left of US politics, including the Democratic party and the unions) weren't so much upset that corporations could now spend unlimited amounts on elections - they were upset that secretive donations made by unions to Left-wing causes might now be matched by their opponents on the Right from other sources!

Politics is getting dirtier, nastier and more corrupt by the day, it seems to me.  Looking at the billions of dollars being used by all sides, Left and Right, Republican and Democrat, to 'buy' influence, the reason for that is very clear, isn't it?

"For the love of money is a root of all kinds of evil, for which some have strayed from the faith in their greediness, and pierced themselves through with many sorrows."

This is why the unions, notably the AFL-CIO and SEIU, were the big financial backers behind the Occupy movement, sending food trucks and paying for the porta-potties that the Occupods frequently didn't bother using. Even United Mine Workers was propping up Occupy in Washington DC, despite the fact that the Occupods and Obama are anti-coal and hurt the UMW's membership.

It should come as no surprise to anyone how much money is spent trying to buy politicians and their influence. And it will continue to be this way, not until campaign finance reforms are passed, but until the amount of power the government wields is whittled away.

Consider the case of .govcare: regardless of whether you think it was a massive gift to the insurance companies to help them prop up their unsustainable costs, or you think it was a long overdue nail in the coffin of policies like "pre existing conditions", you have to admit that the value or loss of this new legislation is worth BILLIONS. Is it then any wonder that corporations and unions alike will spend millions to buy favor? The more money the government has the power to take or give, the more money will be spend ensuring that taking or giving happens in the "right" place.