An interesting perspective on life expectancy


As part of a longer article on US health care in the latest Daily Dispatch newsletter from Casey Research, the authors provide some interesting insights into how US life expectancy has increased, and why.  Here's an excerpt from the (much longer) article.

Are We Really Living That Much Longer?

It is easy to dismiss the days of people's lives spanning a mere three decades as prehistoric. But it wasn't really that long ago. Consider that according to data compiled by the World Health Organization, the average global lifespan as recently as the year 1900 was just that, 30 years. In the richest few countries on Earth at the time, the number rarely crossed 50.

However, it was just about that time that public health came into its own, with major efforts from both the private and public sectors. In 1913, the Rockefeller Foundation was "looking for diseases that might be controlled or perhaps even eradicated in the space of a few years or a couple of decades … Technical approaches also tended to yield immediately quantifiable results that justified equivalent expenditure of funds." 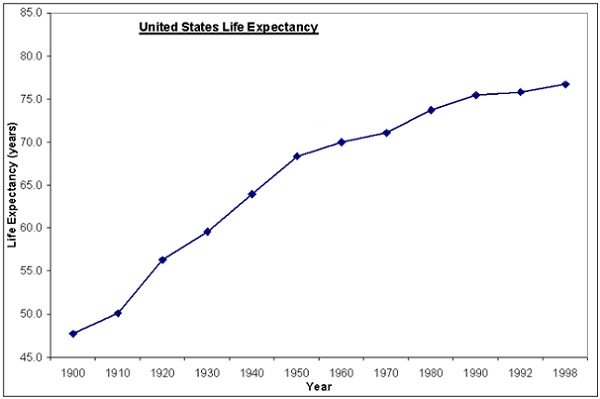 In the US, the average lifespan is now 78.2 years, according to the World Bank. In many countries in the world it is well over 80. But the story isn't so simple. Like all averages, it's affected mainly by the extremes. And in the early part of the 1900s, the data point that weighed most heavily on average lifespans was child mortality. Not the least of the reasons why families were much larger then is that parents routinely expected some of their children to die. 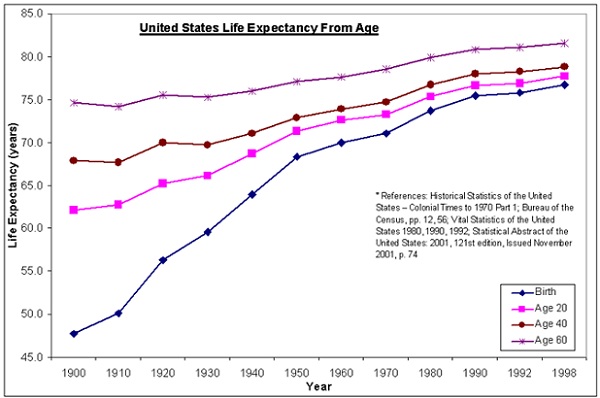 But the flip side, as can be seen in the graph, is that for anyone lucky enough to survive childhood at the turn of the last century, life expectancy was not that much lower than it is today. For all of our advances in medicine, we only live about 20 to 30% longer. Not only is the increase quite small – relative, say, to the explosion in computing power over the same period of time – the amount of money we spend adding another year or two to the average lifespan is on the rise. In other words, each additional day we live costs more than the one before it. And, as with compound interest, the effect is amplified over time.

In essence, we have picked much of the low-hanging fruit from the tree of life.

So if, absent high child mortality, we are not living all that much longer today than we once were, where does all the money we spend watering that tree actually go?

We can get a glimpse of the answer in the following graph. Intuitively, one would think that there should be a relationship between the economic wellbeing of a country and the life expectancy of its citizens. And, as you would imagine, there is a strong correlation between wealth and health. 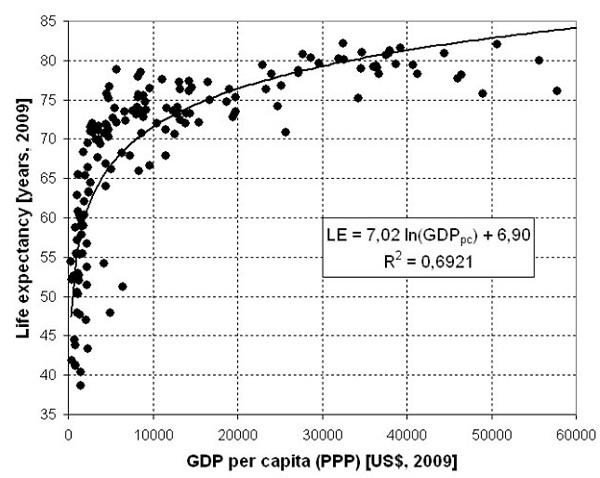 The important takeaway from this graph is the flattening of the curve along the top. What it means is that many countries with lower GDPs (and, consequently, less to spend on health care) can attain life expectancies in the 65-75 range. Pushing them higher than that, as the richer countries do, clearly requires much greater resources. By implication, that means spending more to do it.

The cost of battling the diseases of adulthood rises dramatically with age.

How much so? Well, per capita lifetime healthcare expenditure in the US is $316,600, a third higher for females ($361,200) than males ($268,700). But two-fifths of this difference owes entirely to women's longer life expectancy. For everyone, nearly one-third of lifetime expenditures is incurred during middle age, and nearly half during the senior years. And for survivors to age 85, more than one-third of their lifetime expenditures will accrue in just the years they have left.


There's more at the link.  Interesting and recommended reading.

Very interesting perspective.
I've often wondered if the average lifespan has indeed dramatically increased and by how much.
From observation of my direct family, my great-grand-parents passed away in their 60s, and my grand-parents reached into mid-70s. While my parents lived well past 80. That seems to indicate an upwards, steady trend. Not a dramatic jump. I wonder what really drives this besides the usual "advances in medecine". My suspicion is a combination of factors, rather than a single one.

Genetics and vaccinations, plus sanitation, are probably the keys. Those will get a person through childhood (outside of accidents, abuse, war, and natural disaster). Antibiotics are the next major tool to increase life expectancy (no more dying of sepsis from a bite or scratch). Cancer screening tools, cardiovascular medicine, those are gravy, as far as I can tell.

It's pretty interesting just how old some people were, even hundreds of years ago. The last Revolutionary War veteran lived to see the end of the War Between The States. The last veteran of the War of 1812 lived so long that there are moving pictures of his funeral.

When researching and teaching medieval history, I repeatedly pointed out this problem with the statistics to my students (who invariably didn't want to believe it).
If you control for childhood mortality, the life expectancy goes way up. If you look at women who lived past child-bearing age, the medieval life expectancy gets into the high 60's-to mid 70's; then pneumonia becomes an issue. Basically, if you made it through childhood, and avoided a major infection/trauma/complicated child-birth (and most people did avoid them), you would easily make your 60's...a thousand years ago.
My favorite individual: a formidable Scottish earl: he died in battle at age 80 plus.

Having watched my wife go through cancer in the late 1990s, I was discouraged to find that the mortality rate from cancer is pretty much unchanged since before the "war on cancer". If you happen to have one of the few kinds of cancers for which screening exists: breast, colon, prostate, testicular, maybe another one or two - you'll do better.

In other words, all screening does is help them start treating you sooner, when your tumor is smaller. If your cancer is caught when the primary tumor is under an inch in diameter, you'll probably survive. If it isn't found until it's large enough to cause clinical symptoms, you probably have the same chances as in the 1950s, or earlier.

The downside is the false positive screening result which might cause you to get opened up and undergo serious surgery for nothing.

For things other than mechanical fixes: fractures, injuries that need repair, car accidents and shootings, medicine really hasn't advanced since the advent of antibiotics. The treatments for diabetes, metabolic syndrome and cardiovascular disease haven't gone anywhere. They may even have gone backwards.

What we have here is the "golden Easter egg" that debunks all the liberal arguments for nationalized health care. Why does health care cost so much in the U.S.? Because we can afford it.

The last 5 years of life are consuming most of our expenditures on health care and buy us relatively little in terms of meaningful life.

Absent relatively great wealth, we'd live very nearly as long, and spend quite a bit less, bringing down the "cost of healthcare".

Not genetics, not yet anyway. Part of the reason for the existence of, and poor treatment of diabesity/metabolic syndrome is the disgraceful misinformation (carbs good, fat bad) promulgated by so-called scientific medicine. The scientific and political story is well told by Gary Taubes in his Good Calories, Bad Calories. If you want an update and quick summary, see his recent NYT article, Is Sugar Toxic? Key concept: isocaloric ≠ isometabolic.

I took a Northwestern Mutual life expectancy quiz and am going to live to 96! Are you kidding? My aunt is 99, almost blind, fell out of bed, had stitches and keeps on ticking. We got an LTC (Long Term Care) Insurance offer last week in the mail, and if I really live that long, I shall have a fortune invested in monthly premiums! Isn't there a graceful way to just bow out and hand my children their inheritance?

Peter B, I meant having good genes - as in not having haemophilia, Tay-Sachs, Huntington's, or one of the various metabolic malfunctions or quirks - not modern genetic testing and screening. Noons wondered about longevity factors, and having un-exciting genes goes a long way towards that. I'm sorry if I wasn't clear.

Regarding the cost vs age argument, while basically correct completely overlooks the most obvious point:
Average life expectancy is most effected by premature deaths than extended lives.

It's a lot cheaper to save 1 baby from infection / influenza / drowning/etc, than it is to provide 3 middle aged men with artificial heart valves and immunosuppressive drugs till they reach 80. And so, once you fix the basics, it gets more and more expensive. Stands to reason