We've examined before the ways in which our government and our politicians lie to us concerning the unemployment rate.  Both sides of the political aisle do so with equal enthusiasm and lack of shame.  Neither the Democratic nor Republican parties want us to know the truth about the unemployment rate . . . because if the entire electorate did know, we'd be so outraged by their mendacity and duplicity that we'd vote the lot of them out of office.  I still hope against hope that Americans will one day wake from their political apathy and do just that . . .

Be that as it may, last week's unemployment report for June tried to persuade us that the 'official' U3 unemployment rate was unchanged at 8.2%.  This is, of course, a bare-faced lie.  The data have been 'massaged' to produce this result.  Here's the most important evidence of that, from no less a source than the Federal Reserve's official statistics. 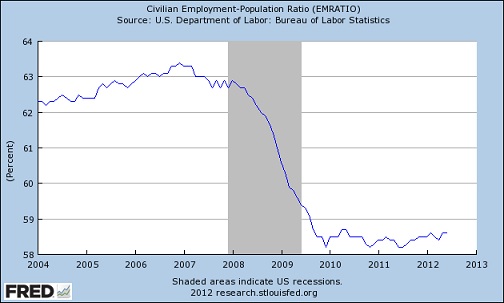 You can see that the proportion of employed persons as a percentage of the total US population has dropped precipitously since the start of the recession in 2008.  It's never recovered.  What's happened in terms of the unemployment rate is that most of those who've lost their jobs have simply been officially erased from the ranks of the unemployed.  If you haven't applied for a job recently, or have given up trying, or you're underemployed and desperately looking for more work to earn more money to make ends meet, as far as the US government is concerned, you don't count.  You're not considered 'unemployed'.  The broader measure of unemployment, known as U6, does take such people into account - and it's showing an unemployment rate of about 15%, not 8.2%!

Even the U6 rate has been 'massaged' to reflect the best possible picture.  John Williams of Shadowstats, who calculates unemployment using the broad measures that were employed before 'politically correct' adjustments were made to the calculations, believes that the actual unemployment rate right now is about 23%.  It's the blue line marked as 'SGS Alternate' in the chart below. 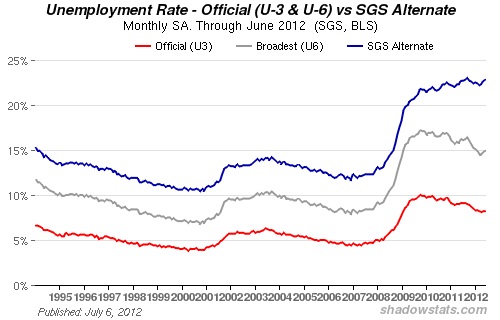 So, when you hear politicians pontificating that so many tens of thousands of jobs have been created, and the economy's improving, and yada yada yada . . . remember that they're cynically, callously and deliberately lying to you.  The truth is not in them.  If you doubt that, ask the unemployed!

Sweden has done this for decades.
Unemployment is hidden by putting people on disability, forcing them back to school, putting them in never ending "re-training" classes at taxpayers expense, taxpayer paid "internship" at companies for a few months, usually rotated between several people so the company doesn't have to actually hire them, and so on.

It's what "welfare states" do, to keep appearances up.

I know lots of people that's never had a real job for decades, instead they jump between government programs which gives them lots of free time and enough money to concentrate on their hobby instead.
They feel they have no reason to work when those programs gives them enough money for their needs, and actually working wouldn't pay much more and take up a lot more of their time.

Technically, the Feds graph does not include military personnel in the total population. And while it includes teens that are employed, it does not include them in the denominator. But....its close enough for government work.

...yet we keep voting the crooks into office. A vote for the lessor of two evils is quite simply a vote for evil!