If you do, you might want to drop in at the Jesters Diner in Great Yarmouth, England.  The BBC reports:

It prompted calls for it to be banned and had one expert warning that someone could die after eating it.

But the "Kidz Breakfast", described as weighing the same as a small child, has remained the talk of a Norfolk seaside town. 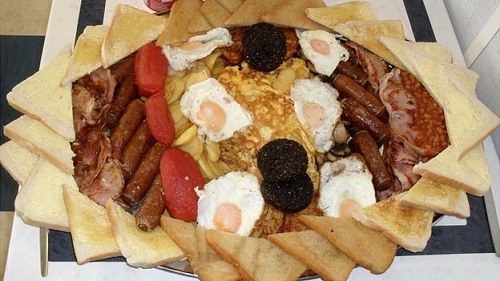 Consisting of a dozen sausages, 12 bacon rashers and enough eggs to be produced from a coop of chickens in a week, Jesters Diner's fry-up in Great Yarmouth contains more than 6,000 calories and weighs in at 9lb (4.08kg).

But despite hundreds being sold after it was first put on the menu 18 months ago, only one person has managed to eat "the baby".

The "Jesters Challenge", at the cafe on Morton Peto Road, invites contestants to eat the breakfast in 60 minutes, with no additional help, to get it free of charge.

The cafe menu claims you can "leave half a stone heavier" by tackling their "ultimate breakfast".

I reckon that could feed half-a-dozen people with normal-size portions.  The thought of tackling it alone is enough to give me the collywobbles!

Labels: Amazing, Boys and their toys, Food and Drink, Health, The Mind Boggles
Email ThisBlogThis!Share to TwitterShare to FacebookShare to Pinterest

"collywobbles", I haven't heard that term in decades. Thank you for reminding me of the joys found in the language.

Im a pig when it comes to food like
that reckon i could eat it but not
all that toast,now that would do for
the weekend.