Like I said yesterday, ammo is heavy!  After loading several thousand rounds into my vehicle, even though I used a cart to move it, my back was having words with me in no uncertain terms . . . words like, "Since you're partly disabled, with a fused spine and nerve damage, would you kindly stop being a dumbass and lifting heavy things like that???"

The gun show was its predictable madness, just like last time.  It's been moved to a larger hall, not because there are more vendors, but because the enormous number of visitors to the last show reportedly outraged the Fire Marshal's sensibilities.  He's said to have threatened to shut the whole thing down unless they moved to a building with more emergency exits.  To add insult to injury, this weekend the Tennessee Boat and Fishing Expo is being held in a hall not a hundred yards from the gun show!  The parking lot was reportedly overflowing long before the doors opened to either venue, and by the time I got there new arrivals were parking up to half a mile away!  (Fortunately, having disability tags on my vehicle, I was able to get much closer.  I snagged a space vacated by another visitor just as I arrived.)

Ammo prices at the show were absolutely insane.  To quote just a few examples, a 325-round box of Federal Auto Match .22LR ammo (in the old packaging, as shown below, not new production), which I last bought a couple of years ago for about $8, was on sale for $49.99! 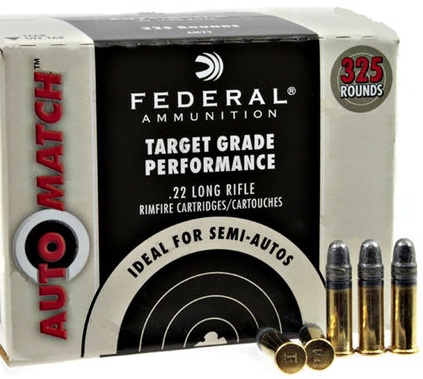 Hornady's LEVERevolution ammo in various calibers was selling for anywhere from $35-$55 for a 20-round box, and Winchester's Ranger T-series line of law enforcement ammunition (my personal preference for 'social use' ammo in several calibers) was priced anywhere from $60 to $80 per box of 50 rounds!  (No, I'm not selling any of my stash!)

I'd already decided I wasn't going to join in the madness at those prices.  I wanted to sell my ammo, not parade it in front of salivating wannabe buyers who couldn't afford it!  I looked up on the Internet over the past few days the prices for each load that I had for sale, then asked 75%-80% of those prices, with discounts for those who bought more than a box or two.  Sure enough, I had plenty of interested people . . . but the gun show organizers wouldn't let me bring in a cart loaded with ammo.  They said I'd have to rent a table if I wanted to do that (which is fair enough, I guess).  I accordingly walked around with a sign taped to my backpack, and a few hundred rounds of ammo inside it, and met prospective buyers outside to walk back to my car and view the ammo there.

I sold close to a thousand dollars worth of goods today, but still have well over half my ammo left, because many buyers weren't willing to leave the show and walk back to my car to inspect what I had.  I'll rent a table at the next show, and put out the rest of my ammo plus a few other bits and pieces, and try to sell it all.  Still, what I made today is enough to pay for my truck's new tires, with some left over.  When I've finished selling everything, I hope there'll be enough to increase our emergency food reserves, plus buy a couple of new scopes and pay for some gunsmithing and other bits and pieces I need to bring my rifles, shotguns and handguns into peak usable condition.  Given what I foresee coming down the pike, economically speaking, I'm very happy about that, because it's most unlikely I'll be able to afford such things in future!

Labels: Business and Commerce, Firearms, Idle chatter, Me me me
Email ThisBlogThis!Share to TwitterShare to FacebookShare to Pinterest