Saving (a lot of) money on shooting practice


With the recent appalling increase in the price of firearms and related materials, even the cheapest ammunition in pistol or rifle calibers can now cost as much as $1 per round, making regular training and/or practice unaffordable for many of us.  Even the lowly .22 Long Rifle rimfire round has become much more expensive.  I've seen sellers asking $49.99 for 500-round bulk packs at local gun shows, and I'm told this price level is becoming more common in many other areas too.  That translates to 10c per round - ridiculous when you consider that three months ago, the same cartridge would have cost less than 3c!  Of course, for many shooters the price is irrelevant, because they can't find ammunition for sale anywhere, at any cost . . .

I've been wracking my brains, trying to figure out a solution.  I train disabled shooters now and again, and for them the situation is even worse.  Most of them are on some sort of disability income, which is usually far too small to allow them to buy quality firearms or more than a token amount of ammunition at the best of times.  At present, it's out of the question.

Fortunately, I think there's a solution that meets 50%-70% of the training needs of most shooters, and costs a lot less than cartridge ammunition.  The answer lies with the lowly BB gun.  We're accustomed to regarding them as kids' toys (remember the famous line, "You'll shoot your eye out!" from the film 'A Christmas Story', which popularized the Daisy Red Ryder BB gun?).  However, in recent years, manufacturers have begun producing realistic BB gun replicas of many mainstream rifles and pistols.  As an example, Umarex has a very extensive selection of such replica weapons.  I chose one of them to test for this article. 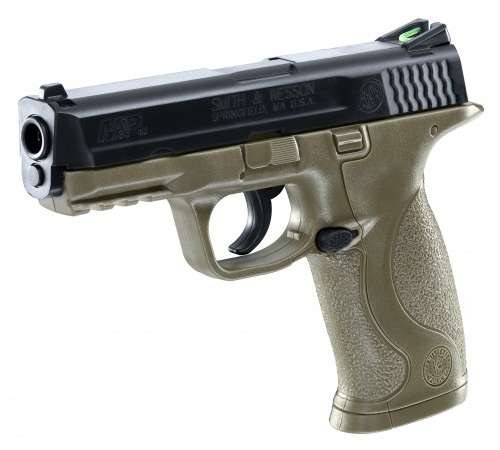 The pistol shown above is Umarex's BB-firing replica of the Smith & Wesson M&P pistol.  It's almost an exact reproduction in terms of size and layout, and its trigger feels surprisingly similar to that of the full-size weapon.  It contains a 19-shot BB magazine, and fires them using a standard 12 gram CO2 cartridge, as used in soda syphons and many Airsoft and paintball guns.  The cartridges are available from many vendors, in packages containing anywhere from 5 to 40 units.

This particular replica attracted my attention for several reasons.  First, customer reviews of it on Amazon.com were generally very positive.  They stressed how similar it was to the 'real thing' in terms of size, trigger pull, etc.  These are obviously useful attributes in a training weapon.  Second, I tested it in several standard holsters made for the S&W M&P pistol, and found that it fit them almost perfectly.  That means training can include drawing it and preparing to fire.  Third, it's very low-cost - currently less than $30 at Amazon, for example.  Finally, it's widely available, and should be easy to find.

In informal testing, I've found it to be a very useful training tool.  It doesn't have a reciprocating slide, of course, like the real article, and it's much lighter;  but its trigger pull is very similar, albeit (at first) heavier and with more 'stack' than most M&P's I've fired.  The sights (while different to the standard pistol) are perfectly usable for training.  Within distances of 7-10 yards it's plenty accurate enough for the purpose.  It doesn't do well outside in a strong crosswind, as the very light BB's are easily deflected from their path;  but to compensate, you can buy BB target 'traps' for indoor use, and set them up inside your home for realistic home defense training.  (They work outdoors, too.  Whatever you use for targets, make sure they can absorb or stop the BB's, because otherwise - as commenters have pointed out - they may bounce back, with the potential to injure someone.)  It lacks the noise and recoil of cartridge-firing weapons, and you can't train realistically for reloading and stoppage drills, but in terms of drawing it from a holster, sight alignment and trigger control, it's probably just about as good as the real thing.

You may ask why I don't recommend Airsoft guns, firing a larger plastic pellet, as well as (or instead of) BB guns.  There are two reasons.  First, with some notable exceptions, they generally fire their ammunition at a lower velocity than BB guns, making them less accurate at other than close range, and allowing the wind to deflect them more.  Second, their ammunition doesn't degrade naturally.  Steel BB's can be picked up with a magnet to clean a room, and outside they'll rust until they disintegrate, whereas the small plastic balls used by Airsoft guns can be very hard to find, and will last almost indefinitely.  That adds to pollution of the environment - and firearms enthusiasts have enough negative publicity to cope with, without adding to it by offending environmentalists!  Nevertheless, Airsoft guns are a perfectly viable choice if you prefer them, and if you can get replicas of your favorite 'real' weapons in that format.  They're also safer to use in person-on-person training (the US Army has tried this, as have some law enforcement agencies), as the larger, slower projectiles are much less likely to cause injuries other than bruises.  (I don't recommend you do this:  but if you do, make sure you wear protective clothing, particularly over your eyes and other vulnerable organs and areas.)

If you don't like the S&W M&P pistol, Umarex offers a wide variety of BB-firing replicas of other mainstream pistols, and a few rifles as well.  Their replica of the Winchester lever-action rifle is rather expensive, but I'll consider it if I ever have enough money to afford it, as its operating costs will be much lower than the real thing for training purposes.  I could set up miniaturized targets at relatively close range to approximate what the real thing would look like at more realistic distances.  Other manufacturers and vendors offer more replicas of mainstream pistols and rifles.  Here, for example, is an amazingly realistic-looking BB-firing replica of the M14 service rifle.

As for costs, there's no comparison at all.  I've spent the following on my evaluation gear for this article (all prices correct as at the time of writing):


Assuming the pistol lasts long enough to shoot all 2,400 BB's (and I see no reason why it shouldn't), that will translate to a cost per shot of less than 2.7c, including the amortization cost of the weapon itself.  If the pistol lasts longer (and again, I see no reason why it won't, given routine cleaning and lubrication), subsequent shots (paying only for the BB's and CO2 cartridges) will cost less than 1c per round - many times cheaper than the lowest-price cartridge ammo currently available.  Even if I wear out a pistol with every pack of BB's, and have to replace it, it'll still be an economical proposition compared to buying ammo to feed my 'normal' weapons.

So, there you are.  Want to keep your hand in with a pistol or rifle, but can't afford the current cost of cartridge ammunition?  Consider the humble BB gun.  You might be pleasantly surprised.  Just don't shoot your (or anyone else's) eye out!

I totally agree. I used to shoot a copy of a Beretta 92 that was very much like you described this copy of the S&W M&P. It was an excellent training device for learning not to flinch and not to anticipate recoil, and for what is the equivalent of dry-firing on steroids.

I once met a shooting coach who has all his beginning students, of any age, train with BB guns. By the end of the course they are routinely shooting objects tossed into the air and many of them are able to hit pennies tossed into the air. I remember one of his statements was "every target is the same size".

A couple of very minor quibbles:

"It doesn't have a reciprocating slide, of course, like the real article"--Only the "of course", since 'blowback' BB and Airsoft guns are available where the slide does reciprocate when fired. More expensive, and as I understand use more CO2 per shot.

Good idea Peter, thanks! And concur withe Sevensteen, they do make a biodegradable airsoft pellets.

Echoing the last line of your post, BBs basically bounce badly. Lacking a purpose made backstop, the target backstop and surround should be of a material that allows the BBs to penetrate and be absorbed.

Working on a very limited income...this post gives me a few more options. Thank You!

I was looking at an AirSoft M-14. From a distance it looks OK.

Since I toted a real one around the countryside many years ago for Uncle Sam I figured I'd invest in an AirSoft model just to hang on the wall.

Unfortunately, when I got up close I discovered the AirSoft version substituted cheap plastic for all the wood in the real deal. And it was expensive too.

I gave it a pass.

As Sevesteen said, they do make biodegradable Airsoft pellets in several different weights.

However, a good blowback Airsoft pistol is pricey. For example, the SIG P226 clone (made by SIG) is $150.

If you don't require all-metal construction, you can find blowback pistols for under $100.

I always favored pellets over BBs or airsoft... though of course making a semi-auto pellet gun would be difficult.

Some pellet guns are strong enough for hunting(though these are rifle variants), indeed I've even seen some used for boar hunting(close range to the head).

I was interested in the BB version
of the M14, till I handled one.
Very cheap feel and way too light
to simulate shooting a real M1A.

Used to practice for bowling pin matches with a Colt .22 kit on my
.45 frame and a Daisy Desert Eagle
replica BB gun with a reciprocating
slide. My son and I shot the
Daisy in the basement. It didn't
last as long as I hoped it would.
Was fun, and useful, while it lasted though.