The legendary pianist died yesterday at his home in Fort Worth, Texas.  He was 78 years old. 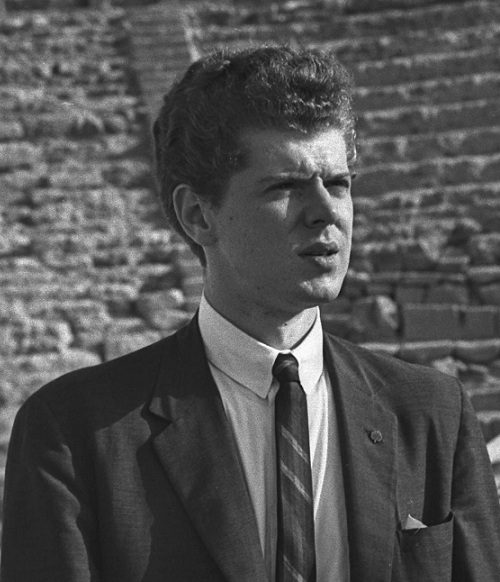 Van Cliburn was a complex, sometimes controversial figure, but will forever be remembered for raising classical music to 'rock-star' status for the 1950's and 1960's generation.  He was the first classical musician to sell over a million copies of a recording (by RCA Victor in 1958, of Tchaikovsky's Piano Concerto no. 1, conducted by Kiril Kondrashin).  A copy may be heard on YouTube (it's outstanding!).

He most famously won the inaugural Tchaikovsky Competition in Moscow in 1958.  The Telegraph reports:

In October 1957 the Soviet Union had beaten the United States in the space race by successfully launching the Sputnik 1 satellite into orbit. Now Moscow wanted to demonstrate its cultural superiority. The jury at the inaugural Tchaikovsky Competition was itself a remarkable line-up of Soviet musicians: Dmitri Shostakovich, Emil Gilels and Sviatoslav Richter among them (along with Sir Arthur Bliss from Britain).

The intention had been that a Russian pianist would triumph. However, Cliburn’s performances of Tchaikovsky’s First Piano Concerto and Rachmaninov’s Third so dazzled the jury that they sought advice from the very top. “Is he the best?” Nikita Khrushchev, the Soviet leader, is reported to have asked. “Then give him the prize.”

Here's Van Cliburn in Moscow in 1962, performing the third movement of Tchaikovsky's Piano Concerto No. 1, a piece that he made his own.

He was amazing. I had almost forgotten how amazing.

Amazing, and interesting. Many years ago my Music Dept. at the university bought a brand new Steinway Concert Grand. It cost a fortune. It is an incredible instrument. Van Cliburn came to our university and "inaugurated/christened" it. It was a very special event. Everyone wanted a piece of this man, and he was charming. Tickets were non-existent, so I offered to work as an usher. :)
He played many pieces, but he baptized the grand with Robert Schumann's Widmung (Dedication). It was a night to remember. (I still have my key to that piano.)
He was an extraordinary pianist. Lucky us.