Readers will recall that a couple of months ago I issued an appeal for anyone with contacts in the ammunition supply field to help me locate enough .22LR ammo for disabled students who participate in classes I help organize in various centers.

Several of you came through with generous donations of ammo totaling over 4,000 rounds, ranging from a 555-round brick to 1,500 rounds from a very generous individual.  I'm profoundly grateful to you all.  It's all gone out now to various centers, where it'll be put to good use by mid-year.  I've managed to buy another 4,000 rounds from various sources - mostly by driving to Wal-Mart or Academy Sports first thing in the morning and lining up with other hopefuls, trying to buy .22LR bulk packs as they're put on the shelves.  Usually I came away empty-handed, but occasionally I struck it lucky - often enough to persevere, anyway.

Today I obtained the final 2,000 rounds I needed for this year's classes.  I went to a local gun show with two handguns, and sold them both.  One was a revolver that an ammo dealer (manning a small two-table booth along with his wife) really, really wanted.  He didn't have enough cash, but he did have a dozen 550-round bulk packs of Federal .22LR on his table (shown below), priced lower than anyone else at the show at 10c per round. 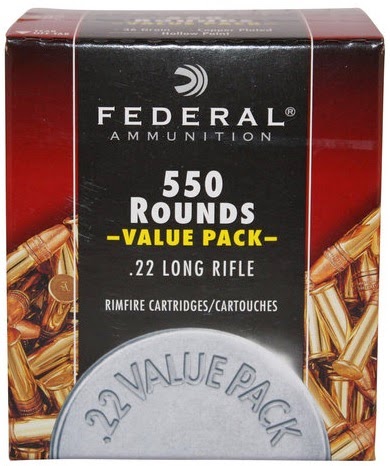 We dickered and argued around, and I ended up with some cash and four bulk packs of ammo in exchange for the revolver.  He said he'd resell the gun in due course, but from the way he was fondling it (and the resigned expression on his wife's face) I suspect he'll hang on to it for at least a while and enjoy it himself.  It's a very nice revolver, so I won't be surprised if he ends up keeping it.

So, after two months' hard work and with your very gratefully received assistance, I've finally managed to put together 10,000 rounds of .22LR ammo.  I suspect it won't be nearly so easy in future, because I've learned a number of valuable lessons over that period.  Readers may recall that in April last year I wrote about the insane prices being asked for .22LR ammo.  Things are a little better, but there are clouds on the horizon.  Consider the following points.


Perhaps the best summation of the .22LR ammo situation was provided by user MeagerHair on the Ruger Forum in January last year.

Sounds like a lot? About 1,800 Walmarts sell Ammo, that is less than 8 bricks per day per Walmart.

Without substantial capital equipment say they can flex up 20%. That is still less than 10 bricks per day. If you went for adding capacity say 50% to 12 bricks per Walmart per day, if you started now it would take you 18 months minimum to get new lines in production.

It is better not to do the math.


I guess that's as true today as it was just over a year ago.  If you need .22LR, I'm afraid you're going to have to pay a lot more for it than you did in years past.  I daresay the days of rimfire being low-cost plinking fodder are probably over - and I'm going to have to find a cheaper way to train disabled shooters.  BB and Airsoft handguns, here we come . . .

What we're still seeing here is that as soon as the local Wal-Mart puts any .22 out, it gets scarfed up by re-sellers, often other local stores that just put their price tags right over the Wal-Mart stickers. It's also pretty apparent that these buyers are often getting tipped off as to when this ammo will be put out for sale as the same people seem to be winding up with the bulk of it.

Glad you're able to get what you needed! :-)

I do feel for my Southern neighbours. We've only been slightly affected by an ammo shortage in .223 and 9mm. 22lr however, is in ample supply. I'm going to link to Canadian Tire's page for Rimfire and our prices are about half of what you pay.
http://www.canadiantire.ca/en/sports-rec/hunting/ammunition/rim-fire.html

We are victims of our own success. More shooters, need more ammo, and when it's available they buy more against shortage. And increasing production runs into raw material limits. Oh, for a time machine and a pile of cash!

Peter, you are right - I have been watching ammo costs literally every day for the past couple of years, and .22LR simply has not moved from 10-20 cents per round for the cheapest stuff, and it is not going to get better anytime soon. That's why I don't read a lot in the ammo forums anymore; they are mostly full of people who complain everyday that .22 is not 2 cents per round like it was several years ago. Then they complain about people hoarding ammo (which they admit to doing themselves) and also about people buying out the supply at their local Walmart and selling it online. It gets kinda old.

Good on ya for getting together a bunch for training! I hope that works out well.

@Differ: If I send you some money, could you buy me some of those cans? I'm serious. If you're able to help, please drop me a line (my address is in my blog profile).

There are a couple of excellent books about how long the lead-time was for setting up manufacturing pre-WWII, when some folks saw the writing on the walls in the late 1930s, and they got the ball rolling starting in 1938. (Freedom's Force, Arsenal of Democracy, etc). Fascinating reading. If a guy had, I don't know, $50 million to buy the machinery to produce a few million rounds of 22 a day (perhaps go whole-hog, and make the brass, bullets, powder, priming compound, assemble, package, everything, perhaps set up near a manufacturer of one of those things) seems to me the investment could be recovered pretty quickly, and the the ROI would be pretty good. Right now, people are not shopping "quality," they will settle for "go bang" in a pinch (and a lot are in a pinch).
Anyone know any venture capitalists?

I was in walmart the other day and picked up 225 rounds remington hollow point for 11 dollars and some change. Guy said that he has not seen 22lr in walmart for 3 months til now. It was the last box but I always try to stop by the ammo counter when at walmart.