I've been hard at work on a lot of domestic tasks that have been neglected for too long.  One of them was to reorganize my gun safe.

Handguns are always a problem to store in such a way that they don't knock into each other or rest precariously on top of each other, to fall out and get damaged if you so much as look at them crossways.  I've used two primary storage methods for them.  The first is Acorn holsters attached with Velcro to the inside of my gun safe door.  (All images courtesy of Amazon.com.) 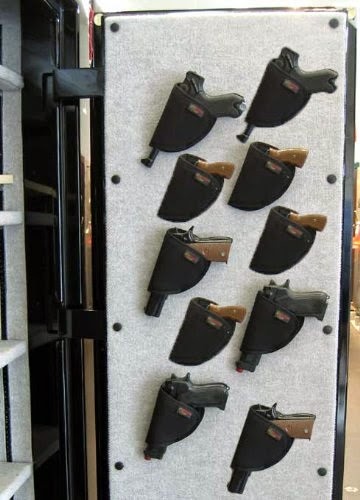 These hold lighter handguns, typically polymer-framed pistols or lightweight (i.e. alloy-framed) revolvers.  I prefer to mount the holsters on a sheet of felt-type material hanging from the top of the safe door, because I found their Velcro tabs pulled fuzz off the door lining without that extra protection. 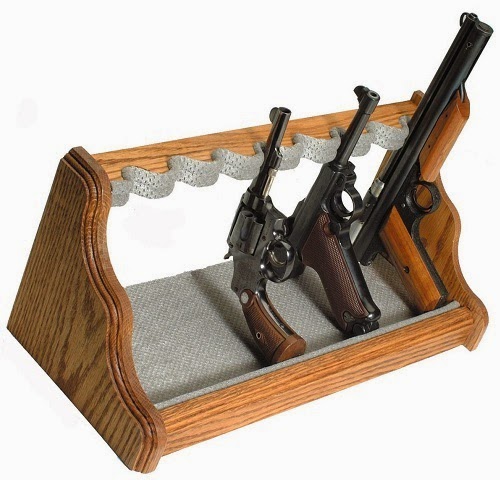 The difficulty with this gun rack is that, if you have rifles and shotguns with long barrels in your gun safe, it forces you to move the top shelf upward to accommodate them.  This means that there's less vertical space above the top shelf to store longer-barreled handguns in such a rack.  I found I could store 4" barreled revolvers and pistols with no problem, and some 5" models as well, but anything longer than that didn't fit.

I've accordingly swapped it for a Versatile Rack system.  It stores handguns lying on their backs, taking up much less vertical space.  They make them for anything from one to ten handguns, and even offer a kit to stack one rack on top of another if space permits.  Their VR10 rack is shown below;  as its name suggests, it holds up to 10 handguns.  This will fit across the top shelf of most medium to large gun safes.

Finally, I picked up some handgun hangers, which I attached to the top shelf of my gun safe.  The gun barrel slides over the lower prong, suspending the gun beneath the shelf. 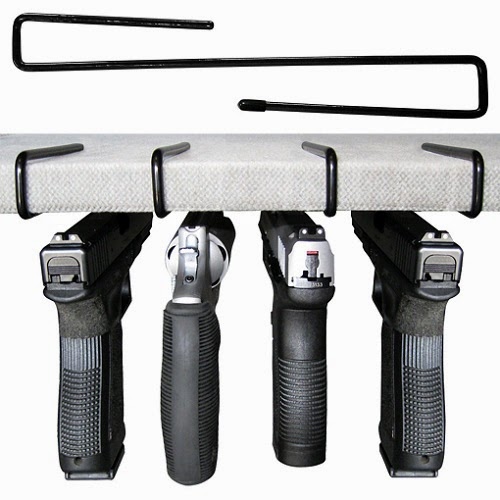 I've put shorter rifles and shotguns on one side of the gun safe, so that handguns supported by these hangers don't interfere with them, and vice versa.

My gun safe is now much better organized, and I no longer have to stack handguns in boxes or pistol rugs on top of each other in every odd nook and cranny.  If you've had the same problem and/or want to make the most of the space available in your gun safe, I recommend this combination of solutions.

Labels: Boys and their toys, Firearms, Security, Useful
Email ThisBlogThis!Share to TwitterShare to FacebookShare to Pinterest

As near as I can tell without actually doing it myself, a lazy susan for the long guns is very efficient space wise. Especially if it holds an inner and outer circle of guns. The standard fixed racks in safes make getting to the back row(s) a problem.

If you put the longer ones in the inner circle, you may be able to add shoulder racks or shelves to fill in the open area above the shorter outside circle. Once you get above the longest ones, you can put full width shelves, of course.

Those hangars look like something I can use, and the Velcro holsters on the door are just cool. Thanks!

And you need every single one of those guns, don't you? :-P

@Snoggeramus: I hasten to add that the pictures in the article above were taken from Amazon.com - not my own gun safe. They're there only as illustrations. (On the other hand, I wouldn't mind having a couple of those illustrated . . . )

All the gun owners I know are the safest folks. Gun safety is number one.

Thank you for sharing Peter.

Of course in Kalifornia, gun ownership is under attack from (FCC Censored Words)-holes.

Biggest problem I find with long guns is optics. Really messes up how well they stack. Other problem is that when you lock 'em up in a dark space like that, they get bored and breed. Pretty soon you need a new, bigger, gun safe.

Rolf, you say that like it is a problem.

the lazy susan setup works well for scopes. They go toward the inside of the circles. The inner circle should have it's slots offset from the outer, so scopes can fit between them.

Will, where can one buy a lazy-susan-type setup to fit into a regular safe? I've only seen the Winchester "Run Around Susan II" kit on Amazon, which holds only 8 long guns in a single circle, not a double ring as you describe. What kit is that, please?

Around thanksgiving I finally purchased a real gun safe. Prior to that I had a 'cabinet' that wasn't a deterrent to anybody but small children. On the plus side a black friday sale cut the price in half (enough to displace considerably shipping costs).

In setting up the safe I did a side for shorter long guns and one for longer ones to be as efficient with space as possible.

Haven't got to the point where stuff stacks onto each other too bad. However at my average historic purchase rate of about 1.75 guns a year eventually it will be a problem. I like the vertical rack system a lot. Also my pistols could group themselves as desired. Revolvers and Glocks don't seem to get along.

I've got to say those hangers are really a nice way to go. I think I got those same ones when I got my safe. They're doubly good because they use what's ordinarily dead space between the tops of rifle barrels and the bottom of the shelves. I've got eight handguns hanging from the shelf in otherwise wasted space. Each gun has its magazines stacked on the shelf above it. Very easy to pick out a gun and its mags for a range trip. Very space-efficient use of the Liberty.

The only drawback is I found them too tight for comfort on .22s. The vinyl was too thick.