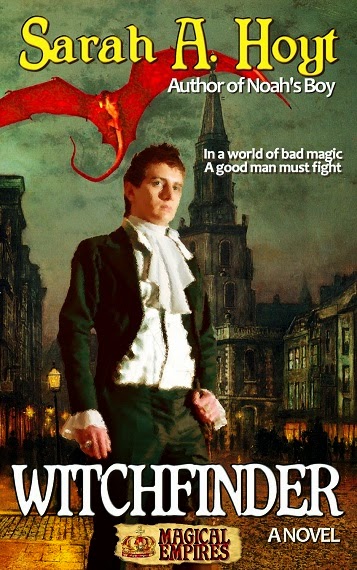 One of Miss D.'s and my favorite authors, Sarah Hoyt, has been published for years by mainstream publishers, including the biggest outlet for military sci-fi and fantasy in today's market, Baen Books. She's still going to be published by them, but she's also putting her toe into the author-published market to see how the water feels.

Her first entirely self-published novel, 'Witchfinder', has just come out on Amazon.  I don't want to give away too much, but in brief, it's set in a world where magic is a path between other lands, other universes.  A hereditary office, that of Witchfinder, has been used to rescue those with magical powers from nations where those powers were not welcome (to put it mildly).

Twenty years before, the office of Witchfinder was abolished and its functions prohibited.  However, the son of the last Witchfinder can't let matters rest at that.  There are still those in need of rescue, and he can't stand to leave them to die.  The book deals with his internal (and external) conflict between duty to King and duty to those he serves, obedience to the laws of man versus obedience to the higher law of compassion and a common humanity.

I had the privilege of reading a pre-release copy of 'Witchfinder'.  I'm not normally a fan of magical fantasy - with the exception of Tolkien, who's the master of the field, and a few select others - but this book held my attention from the start.  I love the way Sarah's interwoven romance, danger, a carefully constructed social and magical environment that's internally consistent and very believable, and the normal good and bad examples of human nature.  You can read the first few chapters for free at the book's page on Amazon, to see if you like it as much as I do.

I highly recommend 'Witchfinder'.  I'll be watching for more in the series.

Thanks, I need one for the ride home next week! ;-)