In my post about .22LR ammunition on Saturday, I mentioned that I'd picked up a couple of thousand rounds at our local gun show that morning, in part exchange for a revolver.  I went back to the gun show yesterday, armed (you should pardon the expression) with my 'gun money', to see what else I could find.  (My 'gun money' is separate from our household accounts.  It's funds accumulated from selling guns, accessories, ammo, etc., which I plow back into my shooting activities.  I can spend some of 'our' money on gun stuff too, of course - both of us have a 'fun fund' allowance when necessary - but I prefer to keep the accounts separate most of the time.)

I was looking in particular for .22LR pistols and revolvers for use in training disabled shooters.  I try to keep at least half a dozen on hand at any one time.  That's sometimes difficult, because I'm always coming across people who (on a disability income) simply can't afford to buy their own guns.  I must have given away somewhere between two and three dozen firearms over the past decade or so.  I'm glad to be able to help - it's one way I can 'give back' to my community - but it means I have to replenish my training battery every so often.

I got lucky.  An older gentleman was wandering around with a blue Beretta gun box containing a U22 Neos identical to this one: 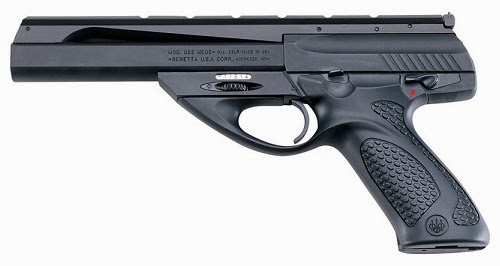 It looks like something out of a science fiction movie, doesn't it?  I'd heard good reports about the Neos from reviewers and other shooters, so I was interested.  The slide felt gritty when operated, and the gun clearly hadn't been properly cleaned for a long time;  but the seller was asking a reasonable price (about 70% of retail).  I walked away with it.  After a thorough cleaning last night, with the help of our housemate (who enjoys cleaning guns much more than I do!), it's now very slick and smooth in operation, and I'm looking forward to trying it out at the range this week.

I noticed a few things at once.


Even at retail prices, the Neos is cost-effective when compared to competitors like the Ruger Mark III, Browning Buck Mark, Smith & Wesson Model 22A or the more concealable Ruger SR22 (my recommended concealed-carry .22LR pistol for those who can't manage heavier recoil) and Walther P22.  If its performance at the range lives up to its reputation, I'll be very pleased to add it to my training battery.

That wasn't the only good deal of the day.  I've been trying to find a smaller .45 ACP pistol for a disabled shooter who has the upper body strength to handle it.  I ran into a man selling a Kahr CW45. 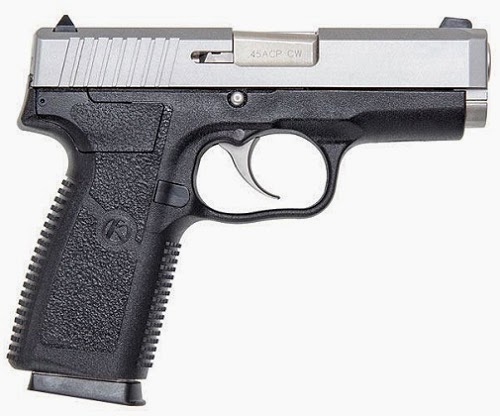 He claimed it was 'new in the box'.  However, upon examination it had clearly been fired more than a little - the interior of the slide and barrel were pretty dirty, and the imprint of a cartridge case head was visible in the residue on the breech face.  I pointed this out to the seller, who appeared surprised;  he claimed to have bought it from a man who told him it was NIB, but since even a cursory examination could disprove that, I think he was trying his luck.  It was in a Kahr pistol box, the older plastic variety, but I knew that wasn't the box in which it had originally been sold - Kahr stopped using them some years before this model was launched.  However, it did have a second magazine with it, where the CW45 is usually sold with only one magazine.

The seller wanted more for the gun than its normal 'street' retail price.  I pointed out the discrepancy, but he wasn't prepared to move much at all;  so I walked away.  However, I had a feeling that he wouldn't find many other takers at his asking price, so after an hour of wandering around (during which I picked up the Beretta Neos mentioned above), I stopped at his location once more before leaving, and repeated my lower offer.  He hesitated, hummed and hawed, but eventually he took it - so I walked out with two guns, in exchange for the two I sold yesterday.

We cleaned the Kahr as well last night, finding it not too badly gummed up.  To my surprise, once the crud had been cleaned off them, the sights proved to be aftermarket Trijicon night sights (with tritium inserts for better visibility in darkness).  They added $80 to the value of the pistol, but neither the seller nor I had noticed them at the gun show, dulled as they were with gunshot residue.  The pistol is also equipped with rubber decal grips, making it softer and easier to hold.  I reckon I bought over $500 worth of pistol and accessories for about two-thirds of their combined 'street' value.  I'm not complaining . . .

(I think compact .45 ACP pistols like the CW45 aren't suitable for most disabled shooters - or even many 'normally-abled' shooters! - because their recoil is harder to control than that of a lighter, less powerful round.  However, they've been given a new lease on life by restrictive magazine capacity laws in New York state, where my disabled shooter friend lives.  [Such draconian regulations may spread to other jurisdictions unfriendly to gun-owners - see, for example, recent developments in New Jersey, Colorado, Maryland and Connecticut, all of which may further tighten their restrictions.]  I'm very much in favor of higher-capacity pistols in view of the threat from criminal flash mobs and other developments.  However, when the law drastically limits magazine capacity I think one's best served by carrying the most effective round possible, so as to make the most of the fewer rounds available.  One must simply learn to manage and control the recoil.  Under those circumstances, a compact .45 ACP pistol becomes a much more attractive proposition - particularly in a state like New Jersey, where only law enforcement officers may possess or use expanding [i.e. hollow-point] bullets.  If one's restricted to solid [i.e. ball] ammunition, all other things being equal, the biggest ball usually wins!)

So, all in all, a very successful gun show for me.  I sold two guns, bought two others more suitable to my and others' needs, and gained over 2,000 rounds of .22LR ammunition, all for a net cash expenditure of a mere $20.  Not a bad weekend's work, if I do say so myself.

Labels: Boys and their toys, Firearms, Idle chatter, Me me me, Self-Defense, Useful
Email ThisBlogThis!Share to TwitterShare to FacebookShare to Pinterest

I've also been wondering if the new rash of lower magazine limits in some states would bring a resurgence of interest in the .45ACP. It's one thing when you're talking 8-10 rounds of .45 vs. 17 rounds of 9mm (in free states, but if you're limited to no more than 10, you may as well drill the holes as big as you can.

If you only get 10 (or less), the wise person makes those 10 as big as possible (assuming the shooter can place the shots accurately... you're still better off with 10 small hits than 10 big misses).

The Kahr is a great pistol for people with very small hands.

Not bad. Not bad at all!

Sidebar: my older daughter has a Neos. Although it operates quite well, it sprays rounds all around the target - even when fired from a rest. We suspect ammo issues as much as anything, but its lack of accuracy has limited the amount of time she spends shooting it.

Word to the wise:
Make SURE you grease the reacheting screw well. On some of them, they tend to tighten when fired a lot, making it VERY difficult to turn when cold.

(we have 2, one does this, one does not)...Friends tell me the some thing, some do this, some don't

There was a recall on the NEO a while back. I believe there was an issue with the safety. You may want to check it out.

@Brass: I already checked it, thanks. This one's post-recall.

Good buys, especially on the compact .45acp. One of my favorite ranch carry guns is a 6 shot .45auto (Star PD), I'm very confident with it on.

I recall that the big surge towards compact pistols was the 10 round magazine maximum for the 1994 laws. Manufacturers figured if you were stuck with 10 round magazine capacity, it may as well be compact. A lot of small Glocks were sold because of that.

Hope those guns work out for you - those sights on the Kahr was a bonus!

Don't dink with the sights on that NEOS.

It'll look even more spacey with a small red dot perched up on that rail, and you can fire shots at a faster rate.

I use a couple Ruger MK IIs and a brace of Browning Buckmarks as .22 trainers. I've wondered why some gun company hasn't used their base product - as in the current Ruger Mark and Buckmark, etc. - to produce a slightly less expensive .22 trainer for instructors (several gun companies offer discounts to NRA-Certified Instructors via the NRA Instructor Sales Program). In the case of Ruger and Browning, only a sight change would be necessary - bigger sights with a wider rear notch and narrower front sight. If they wanted to go all the way, some sort of attachment point for an inexpensive laser (I have Crimson Trace lasers on several of my student center fire handguns; I adjust them to put the dot 5 inches low and 5 inches right at 20 feet. I start beginners with 9 inch paper plates at 18 feet, so if I see the laser dot on the cardboard backer an inch off the plate at 4:30 I know they have correct sight alignment on the aiming point in the center of the plate).