The 'last wishes' of a venerable VW vehicle


I'm sure many of my readers have driven (or been driven in) a VW Kombi, or Microbus, or van, or whatever it was called in their country.  (In South Africa it was first called the Kombi, then the Microbus for the variant with the updated body.)  I drove both types for thousands of miles up and down the country, ferrying people and supplies here and there.

The Kombi came onto the market as a derivation of the legendary VW Beetle, and was launched in 1950.  It's been manufactured in Brazil since 1957, and that country was also the last to make it.  The production line shut down at the end of last year after producing a final 600 vehicles in a special 'Final Edition', shown below. 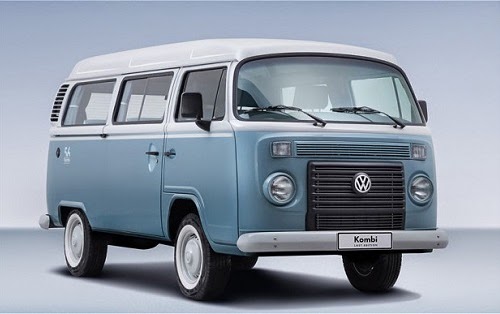 To commemorate 63 years of production of the Kombi, Volkswagen produced this nostalgic advertisement guaranteed to appeal to old-timers like me.  YMMV, of course.

Just bought an '82 Vanagon Westphalia today. I was sad to see that production has stopped. The world will be a bit less fun in the future, perhaps.

One of the very first type of vehicle I drove as a delivery driver was a Kombi ute. Seeing this brought back a few memories.

Mom & Dad had a '61 station wagon, a '68 Kombi (no rear seating) for transporting goods to our store in MT and it served as the valley ambulance too.

Last but not least I miss my highly modified '65 bus. It would do wheel stands in first and second gear, as long as I didn't break something, which happened all the time...I miss the fun of it all and its simplicity.

Old NFO nailed it - man, could that VW would catch a breeze from an oncoming 18 wheel tractor trailer. That thing 'jumped' a lane almost instantaneoulsy and there wasn't a thing you could do about it, less schooching over the lane before the vehicles approached each other. Scary.

Volkwagon was aptly named 'the people's car'. I had a '66 Beetle, it was a dream to work on. I remember Dad taking it in to be serviced one time at the dealership. The mechanic when we came back told us no way did we drive it in, there were at least three things preventing it from being functional. Lol.

Guy SWORE the Bus would float "just like the Beetle."
Drove it into the campus lake at speed.
Thank God he left the driver's window open. He climbed out as the bus impersonated the Titanic.
Campus cops didn't ticket him as the towing fees far exceeded any fines they could enforce.
And yes, the VW was running again by the next weekend. A little ponggy from the lake water but mechanically sound.

Listen and you can hear the keening of a thousand dead hippies.

A front crumple zone that depended on the strength of the drivers legs for structural integrity. What's not to like?3

I rode in one, once. It scared me. As mentioned, there was nothing protecting my precious self but some sheet metal and a couple of headlights.

For a kid raised watching the crash test dummies testing the energy absorbing crumple zone of more modern cars, that was scary. No thank you!

There are stories that could be told about what happened in, with, and about the VW bus - but in my case there is no statute of limitations so you can all just guess what it might have been.