I don't know how many of my readers remember the musical movies of the 1950's and 1960's.  I was too young to appreciate them, of course, but I grew up listening to my parents as they played the LP records of their music, and sang along to them.  One of my father's favorite singers from the musicals was Doris Day. 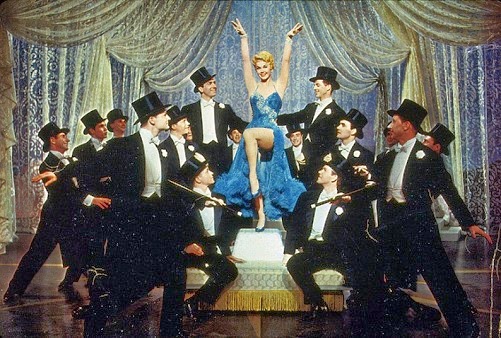 As I've grown older, I've learned to appreciate Ms. Day's vocal talents for myself.  According to the Telegraph, she was an accomplished jazz singer.

Singing had not been Day's original dream. When she was 13 she was a passenger in a car accident that broke both her legs and ended her hopes of a dance career. "I couldn't walk for almost three years," Day recalled. "That was the greatest thing that happened. Instead of dancing, I sang. They carried me three times a week up a stairway to my music teacher."

She spent hours listening to big band music on the radio and was inspired by the singing of Ella Fitzgerald, saying: "There was a quality to Ella's voice that fascinated me, and I'd sing along with her, trying to catch the subtle ways she shaded her voice, the casual yet clean way she sang the words."

While she was still a teenager she impressed jazz band leader Barney Rapp with her version of Day After Day, a song by Richard Himber & His Rhythmic Pyramids Orchestra. Rapp told her that von Kappelhoff was a name too unwieldy for concert marquees and suggested she changed her name to Day, in honour of the song she loved.

Her career was off and running and after a spell with the celebrated jazz band of Bob Crosby, she began singing with Brown's troupe, eventually marrying the band's trombonist Al Jordan, the first of four husbands. "She was every bandleader's dream," said Brown, "a vocalist who had natural talent, a keen regard for the lyrics and an attractive appearance." It was a 1945 song called Sentimental Journey, co-written by Brown, that made her name when it became a sort of unofficial anthem for weary troops as they returned home from fighting in Europe.

It was another jazz standard, Embraceable You, that triggered her career in movies. Her rendition at a Hollywood party prompted Jule Styne to arrange a screen test, which led to her first film, Romance on the High Seas (1948). She was a good actress (Oscar-nominated as Best Actress for Pillow Talk in 1959) but her singing in films was a key factor in her Hollywood success.

Her singing career has been acknowledged – three Grammy Hall of Fame Awards and a Grammy Lifetime Achievement Award, plus the first Legend Award ever presented by the Society of Singers – and she made a successful comeback at the age of 87.

Ms. Day is ninety years old today.  Thanks for many wonderful memories, Ma'am, and may your birthday be happy and filled with music.

I LOVE Doris Day! I used to watch her movies every chance I got. "Don't Eat the Daisies" is one of my favorites. "EGGS BENEDICT?!"

My dad's about her age, he went to Los Gatos HS school with two other Hollywood alumni: Joan Fontaine and her sister Olivia de Havilland - all my parents' old friends are passing on...