The BBC has produced a TV documentary about the ratel (the Afrikaans name for Africa's honey badger).  Despite its relatively small size, it's one of the most intelligent and aggressive predators on the African continent, treated with great respect by humans and most other animals.  Here's an excerpt from the program that demonstrates the animal's intelligence, cunning and determination.

I've met up with ratels in the bush on several occasions, and gave them a wide berth. My buddy Lawdog and his brother had an interesting (and hysterical) encounter with one in Nigeria during their youth.  You can read about the carnage in these episodes:

The South African Army named its first domestically-designed Infantry Fighting Vehicle the Ratel.  It wasn't a bad name association, as the steel version also did a great deal of damage to its enemies during its career. The basic version, armed with a 20mm. cannon, is shown below. 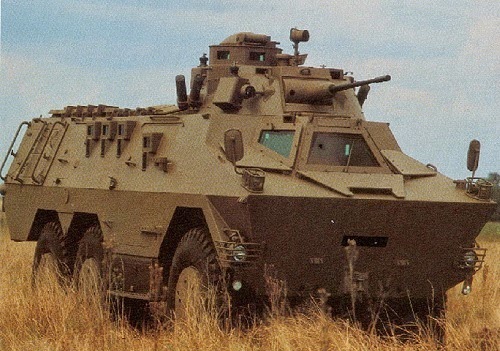 They're still in service today in several countries.

Great video, and LD's story is hilarious! Need one of those vehicles for my morning commute... sigh

Thank you hugely for this heads-up. Mustelids in general are fascinating, badgers rule, and ratels ... well, just apply all the usual superlatives.

I've got diddly/squat for bandwidth, but should this come out on DVD I'll glom onto the whole season's worth if necessary.

Ya know, LD could probbly work those muses into a manuscript....