One of the group's first efforts was to put up this picture on Facebook. 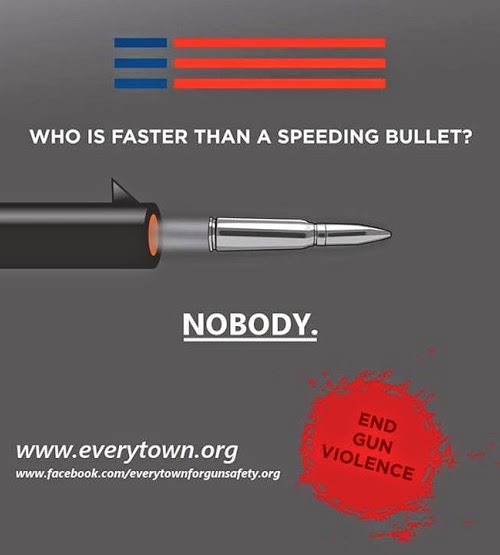 Needless to say, it provoked instant mockery throughout the gun-owning community.  (For the benefit of readers who may not get it, the picture shows a full cartridge coming out of the barrel of the gun.  In reality, the cartridge case would remain behind in the firearm until ejected, and the propellant in the case would burn, propelling the bullet itself - the pointy end - out of the barrel on its own.)  If this new movement is willing to lend its name to such shoddy research and false information, I daresay it won't achieve much.

Everytown has since tried to blame the image on opponents who 'hijacked' that Facebook page, but I don't place much credence in such denials, because this isn't the first time anti-gun forces have screwed up in this way.  It's just more of the 'same old, same old'.

You COULD probably do that with a muzzle-loader.

A crude attempt at an explosive shell, trying for extra murder per shot?

But that's probably more thought than they put into it.

I've seen animations on Mythbusters make the same risible mistake, and the hosts of that show presumably know better.

But that's entertainment. This is public policy, and when the people who want to restrict or prohibit a technology show no more knowledge of it than this, their credibility can reasonably be estimated as nil.

This, from the people who believe themselves to be our betters.

They're so much smarter than the rest of us, and we can't live our lives without them being there to wipe our noses or telling us how to do just about anything. Just ask 'em.

I really think the beauty of this program is that it will aggravate and motivate the entire gun culture - a REAL grass roots movement - to oppose the control freaks of the left.
The only people Bloomey's money will sway are those who see the world as he does anyway, so it's fun to watch him waste the cash.

The opening credits of "Chuck" feature the same error. It is simply that most people are ignorant of something of which they feel they need no knowledge. I daresay most couldn't describe the mechanical workings of an internal combustion engine or other 19th century technology.....
Even the logo for engineers' week at a major aerospace corporation featured an arrangement of gears which could not turn....

Not to mention that every human on the planet is faster than a speeding bullet. The earth orbits the sun at about 66000 mph.