Our new kitten, Ashbutt, is growing like a weed.  His weight and physical size (height, length, etc.) have both increased by about 50% in the month that we've had him.  Even though he doesn't have her bulk (she's a bit portly), at four months of age he's close to the size of our adult female cat already - and Kili is almost five years old!

Here's Ashbutt soon after we brought him home, about 3 weeks ago: 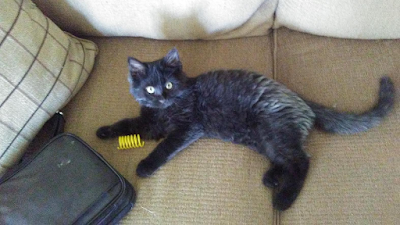 And here he is last Wednesday, on the back of that same couch.  Look at how much further he stretches across the seat cushion now. 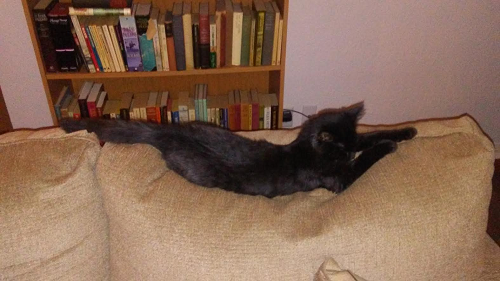 He's incessantly playful, and is a delight to have around.  His favorite toys are plastic-coated springs, at which he launches himself with suicidal enthusiasm, but bouncing balls, squeaky mice and such things are greeted with almost as much glee.

Miss D. discovered that he's probably got at least some Maine Coon ancestry, and perhaps more than a little.  Our vet agrees, commenting that his head is already huge, and warning us that we may have a 20- to 30-pound cat on our hands if he keeps growing this fast.  She also mentioned that he may have a longer 'kittenish' period than most cats before he settles down into maturity.  Apparently Maine Coons can take up to three years before they grow out of it.  This doesn't bother us at all - he's a joy, and we're thoroughly enjoying him.

Kili has passed through outrage, to anger, to frustration, and is finally coming to slow, reluctant acceptance that this furry black thing isn't going to get out of her house.  Yesterday she actually began playing with him for a while.  I've also had both of them on my lap at once;  Kili reluctantly, growling, and Ashbutt purring like a badly-tuned diesel engine.  He doesn't care.  He just has fun.

I'd have to see pictures of his head structure to tell you Maine Coon vs Norwegian Forest Cat, vs one of the other very large fluffy breeds. But regardless, if he's part of any of them, they're fun cats! We had a part Maine Coon when I was a kid, and have a Siberian Cat now. 30lbs is probly very unlikely, but 20 wouldn't be exceptional. Have fun!

My three Maine Coon mix kittens (found in the back yard) are going on four years old, and show little sign of "growing out of it."
They seem to be still growing, and not just sideways, and they're certainly still playful.
Now, if Huckleberry would just learn that he's not a little bitty kitten anymore, and that he no longer fits in small areas (little clear spots on the kitchen counter, my mousepad, etc.), he'd get in a lot less trouble.

We used to breed Maine Coons and they are a great cat. Does he fetch? We've had several Maine Coons that would.

If Ashbutt has M/C in his genes you should keep an eye out for cardiomyopathy and hip dysplasia.

Those are about the only genetic/breed related issues, not all that common but happens enough to be watchful of.

@Jay: Yes, he does. Toss a spring, and he'll bring it right back for you to throw it again. (He usually takes a flying leap onto your lap to do that - sometimes landing in unfortunate places . . . )

If they will eat side by side, they will eventually come to an understanding. The age difference will cause more issues, as the kitten wants to play when the older cat is enjoying a nap in the sun.

We just passed the 1 year mark with 3 kittens from a shelter, and introduced them into a house with a 3 year, 6 year, and 12 year adult cats. The 3 year and 6 year never got along before, but have settled down A LOT with the kittens being mediators. It has been interesting to watch.

All of the issues come from the 3 females. They seem more territorial, and each have spaces that they defend as their refuge of last-resort. The boys are a lot more happy go lucky.

Everybody gives Gramps(12 yo) his space, although they will jump right over him if he happens to be in the raceway during a game of chase. This bothered him a lot last year, but now he looks up then lays back down to continue napping.

3 year old is queen of the house. She's a compact 11 pound bundle of hostile intent when she deems any of the other 5 out of line, and they all know to find other places to be when she start eyeballing them. Yet sweet as can be with humans, and not afraid of strangers. Not even the vet.

It seems to us it is always best when they have compatible feline companions.

They grow fast. He will be wondering why he can no longer fit into his favorite places soon.

Peter (not our gracious Host) said...

I have a Norwegian Forest Cat who will turn a year old later this month. He's 17 lbs, and although his growth rate has slowed, he's by no means done. I'm told that these bloodthirsty heathens can get up to 22 pounds!

His thing is tin foil balls, and yes he fetches them and brings 'em back. After he has beaten on them for a bit, of course.

I've gotten used to him blocking out the sun, and the house trembling when he's in full gallop, as I'm sure you will too.

Since he likes springs, see if you can find one those smaller plastic slinkys

Since they are a spring only longer, when he picks up one end and takes off the other end will stretch out and now he's got something chasing him, on occasion panic and hilarity ensues.

Placing boxes etc in the escape paths will add to the commotion as he won't be looking where he's going.

I am glad he's working out for you!


My HouseCat is a tabby now almost 2 years old, 10 1/2 lbs.
I keep him indoors as there are squirrels, possums, raccoons and skunks around here. Some coyote sightings in the neighborhood also.
His name is T.Rex, suggested by his unusual posture when lining up a pounce. Tail extended, he balances on his haunches with front paws tucked close to his body as he makes ready to leap.
He will chase wadded-up paper balls, occasionally catching them in midair, and will retrieve them for another toss.
He has figured out he will never catch the laser, and no longer chases it until exhaustion. When the dot is on the ceiling he tracks it, while making an odd chittering sound.
He knows every square inch of this place and will investigate anything new. Terrorizes plastic grocery bags. Loves to hide in boxes. He likes to get comfy on any book I happen to be reading.
Not much interested in table scraps, but he really likes pepperoni, string cheese and yogurt.
He still runs around the place like a maniac in bursts of youthful exuberance. Very amusing. He is sitting quietly on my lap as I type this.
He seems like a Pretty Good Cat.
...........

Love 'em while you've got 'em.
They don't live forever, and will leave a big empty space when they are gone.

I had a cat that had all the Maine Coon markings and love for the outdoors, but none of the size. She loved to "help" me garden, by rolling around in the dirt where I was trying to dig. Sometimes I could get her to follow me around the block on walks.

Oh, yes: "helping." Must be a Maine Coon thing.
Huckleberry in particular likes to help: wants to help me with everything, kitchen, office, or otherwise. He also feels compelled to help the laser printer, generally with very untidy results.
Southmoon tries to help in the lab, which can be very distracting when I'm trying to assemble fiddly little electronic things. She also helpfully brings me bits of paper in the office, because paper is obviously so important to whatever I'm doing.
Top Hat settles for patting me on the shoulder - Ow! Claws! - while I'm working.

You need to watch the eyes.
The daughters had a MC when young that is in fact our responsibility till it dies.

It has the heart condition, as a kitten tried to die from eating one of their thongs, has traveled amongst households and now years after they've left the house to grace us with grand dogs in lieu of two legged fecal generators finally resides in our resting place.
The cat likes to be around but only on his terms.
If you don't pay enough attention, whack.
If you pay to much attention, whack.
If you haven't put the food out at the right time, whack.
Needs a fresh glass (?!) of water, whack.

When the eyes take on that reddish reflection, terror ensues.

I have a 13 year old maine coon mix. He's settled down quite a bit, but still wants to catch that laser. And will terrorize any string to death...or pieces. And he still thinks that the proper place for him to be is on my shoulders or my chest when I'm laying down - 20lbs weight on your chest actually makes breathing difficult... :)

Unfortunately, my tabby died over the weekend. She was a couple years older than my tom and I'd had her when I got him, so I'm expecting...difficulties in the next week or two. :(