Some left-leaning readers have been taking me to task (in e-mails) about my article yesterday titled 'To my left-wing friends'.  Some have accused me of being 'passive-aggressive' in my attitudes towards people with such political opinions, or being 'condescending' towards them.

If you want a somewhat more condescending reaction to the left wing, try an article titled 'Celebrities and Progressives Are Totally Confused About Why They Lost America'.

If you want something that's aggressive (without being in the least passive), try Tom Kratman's Thanksgiving prayer this year.

Or, to put it another way: 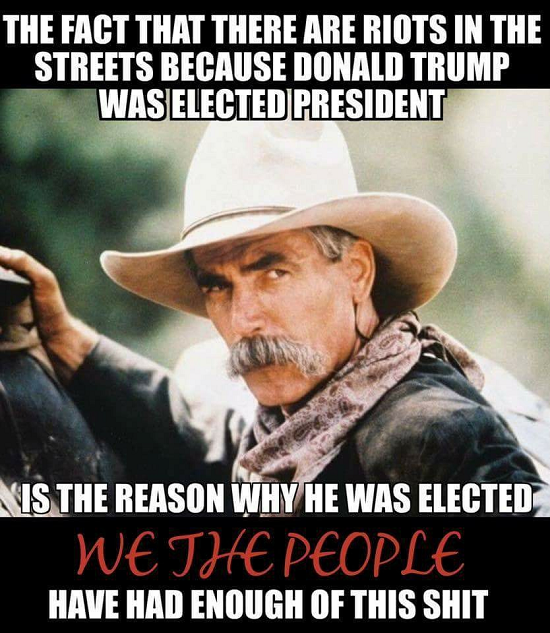 (A tip o' the hat to Wirecutter for that image.)

O. K.
I'm an Australian, politics excite me as much as a cup of cold soup on a freezing day.
Thing is, this.
As far as I can see it, Trump won, and did not, but significantly, Hillary didn't, simple as that.
The equation was Trump and America, Hillary, was a fundamental part of the decades long established political system.
Now, without getting all snagged up in the bits and pieces of the whole thing, it seems like this.
In no particular order.
Clinton was a shoe-in to win, old school.
Trump , well, as far as the media was concerned, should've settled for the chance to run a hot dog stand two blocks south of Times Square.
The rest is history.
There is a groundswell of these events here in Australia.
We have two Political parties.
One for the corrupt Union/Communist/Marxist Socialists, the Labor party.
The other, for the corrupt, elitist, 'ruling class' that they see themselves ordained to be, Liberal Party.
And some minor parties, of little or no consequence.
As the old advertisement said, 'It won't happen overnight, but it will happen'.

I have seen that the losers have centered around one of three camps:

1 Those who won't accept the results of the election, and will resist those results by force of arms (I didn't think they believed in weapons) or societal unrest.

2 Those who won't accept the results of the election, and will resist those results by attempting to subvert them, chiefly through trying to bribe or game the electoral college.

3 Those who have accepted the results of the election, and now demand that the winners "listen to" and "work with" the losers. To them, I will return a quote from their last choice for President: “Elections have consequences, and at the end of the day, I won.” – President Obama to House Republican Whip Eric Cantor, January 23, 2009.

Amen. The reactions to this election have been rather eye opening, and it is distressing how many people bow to the cult of niceness. Which thing, apparently, inhibits reason and upper level cognition. It isn't hate to disagree. It isn't hate to have differing opinions. And facts aren't hate, even if some facts hurt people's feelings or are unpleasant.

The panicking and number of adults sobbing public ally because they didn't get what they wanted has been astonishing. People who pointed out potential harm from the current administration's policies were called fear mangers, haters, and all manner of -ists and -obics and told to get over it because the people have spoken. And these same people who shamed, name called, and actively to harm others (faked "hate" crimes, targeting people who voted differently than they did, etc.) now want surrender (despite the active voter fraud that was going on and was caught) and niceness.

Personally, I'd far rather there be kindness, because niceness has done nothing but draw us closer to the possibility of another Civil War and dividing a nation to the point where the middle ground has all but disappeared.

The open display of hatred began with Valerie Jarrett the day after the 2008 Election, and went down from there. I prefer civility and subtle backstabbing, so much more intellectually rewarding. What we got was a lesson in how not to run the sandbox. Enter The Donald.

Doing anything but agreeing with progressives is being aggressive.

Interesting push-back from the Canadians to U.S. whiners who want to emmigrate. "Don't come here. Why don't you try Mexico or Syria?"

I still hope and trust that God has a sense of humor.