100 years ago today, the Battle of Passchendaele began


It was one of the bloodiest, most arduous, and most pointless battles of the First World War.  By the time it ended, in November 1917, well over half a million casualties had been suffered by both sides.  Over 42,000 of the dead have no known grave, their bodies never having been recovered.  To this day, farmers in the area routinely uncover human remains, weapons and explosive devices left over from the battle. 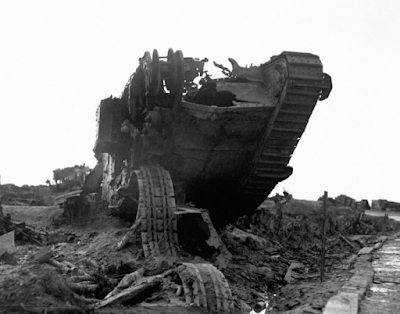 
The Telegraph summarizes the battle thus.

What took place was officially known as the Third Battle of Ypres, but history recalls the horror in one word: Passchendaele. The name, along with the Somme, has come to symbolise the Great War for many.

The Allied assault was launched in the early hours of 31 July 1917. Because of the torrential rain, the British and Canadian troops found themselves fighting not only the Germans but a quagmire of stinking mud that swallowed up men, horses and tanks.

After three months, one week and three days  of brutal trench warfare, the Allies finally recaptured the village of Passchendaele – but by then around a third of a million British and Allied soldiers had been killed or wounded in some of the most horrific trench warfare of the conflict.

The offensive took place in low-lying land which was home to thick clay soil and, after constant shelling during the war,  smashed drainage systems.

Days into the attack, Ypres suffered the heaviest rain for 30 years. Tanks were immoblised, rifles were clogged up and the shelter usually created by shells turned to swamps. Many men, horses and pack mules drowned in the quagmire.

On 6 November the British and Canadian forces finally captured what remained of Passchendaele, leading Haig to call off the offensive and claim victory.

The conditions on the battlefield were indescribably awful.  This video gives some idea of what the soldiers on both sides had to endure.  Sir Launcelot Kiggell, a staff officer at British Army headquarters, was reported to have visited the Passchendaele battlefield after most of the fighting was over, and burst into tears as he said, “Good God, did we really send men to fight in that?”  (The story may be apocryphal, but it deserves to be true.)

One of my grandfathers fought at Passchendaele.  My parents told me later that he would never speak of his experiences there.  I think I understand.

The battle inspired a classic heavy metal song by Iron Maiden, titled simply 'Paschendale', released on their album 'Dance of Death' in 2003.  I think it encapsulates the experience of the Battle of Passchendaele for those who were there, even though it's sung by men of a much younger generation.  Perhaps, in its own way, it's a fitting memorial for those who died there.  I've chosen a video that incorporates the lyrics, which are sometimes hard to understand.

May the souls of all those who fought at Passchendaele rest in peace, and may their sins be forgiven them.  None of them are alive today, so let's remember them with compassion.

"most pointless battles of the Second World War. By the time it ended, in November 1917, "

I hate to be an editorial pest, but this needs to be fixed. Unless you mean to take the position that the 1914-1918 European War was the Second World War and the 1939-1945 was the Third (for which I gather there are arguments).

I think you need to check your post. WWII didn't start until the 1930's.

It was one of the bloodiest, most arduous, and most pointless battles of the Second World War. By the time it ended, in November 1917,

Was there a WWI battle that wasn't pointless? Men dying by the millions because their inbred leaders could not stop the trains. There cannot be a Hell hot enough for any national leader who sent troops into combat during WWI.

There's a broken, battered village
Somewhere up behind the line,
There's a dug-out and a bunk there
That I used to say were mine.

I remember how I reached them,
Dripping wet and all forlorn,
In the dim and dreary twilight
Of a weeping summer morn.

All that week I'd buried brothers,
In one bitter battle slain,
In one grave I laid two hundred.
God! What sorrow and what rain!

And that night I'd been in trenches,
Seeking out the sodden dead,
And just dropping them in shell-holes,
With a service swiftly said.

For the bullets rattled round me,
But I couldn't leave them there,
Water-soaked in flooded shell-holes,
Reft of common Christian prayer.

So I crawled round on my belly,
And I listened to the roar
Of the guns that hammered Thiepval,
Like big breakers on the shore.

Then there spoke a dripping sergeant,
When the time was growing late,
'Would you please to bury this one,
'Cause 'e used to be my mate?'

So we groped our way in darkness
To a body lying there,
Just a blacker lump of blackness,
With a red blotch on his hair.

Though we turned him gently over,
Yet I still can hear the thud,
As the body fell face forward,
And then settled in the mud.

We went down upon our faces,
And I said the service through,
From 'I am the Resurrection'
To the last, the great 'adieu.'

We stood up to give the Blessing,
And commend him to the Lord,
When a sudden light shot soaring
Silver swift and like a sword.

At a stroke it slew the darkness
Flashed its glory on the mud,
And I saw the sergeant staring
At a crimson clot of blood.

There are many kinds of sorrow
In this world of Love and Hate,
But there is no sterner sorrow
Than a soldier's for his mate.

I agree with Chris M. There is no Hell too hot for the "Aristocrat Generals" who dined in luxury far from the trenches while their men struggled to stay alive in filthy, disease ridden trenches only to be ordered to go over the top and charge into machine guns fire. Surely this had a lot to do with the the fall of the Monarchies in many countries after the war.

Those "aristocrat generals" sending their men to certain death from chateaux are to a certain extent a myth. Generals in most armies had a casualty rate similar or higher to that of enlisted men.

Let's look at the British, since they're the most famous supposed example of "lions led by donkeys." Of 1257 general officers (brigadier and above) that served in the British Army, 232 were killed, wounded, or taken prisoner. A rate of 18.5%.

The casualty rate for officers in general was around 17%, while that for enlisted men was roughly 11%.

That's a lot of dead and wounded "donkeys."

For the most part, the military leaders of WWI were no more out of touch or unwilling to adapt than those in any other war. Take a look at combat in WWII and you'll see an awful lot of places, even in the ETO, where the casualty rates matched anything at Paschendale or the Somme. Due to conditions of terrain and transport net in Italy, there were fights you'd have to squint at to tell which war they came from, and of course there are the infamous bloodbaths of the Pacific.

WWII was also proportionally bloodier for the combatant nations than WWI, even excepting the apocalyptic horror of the Eastern Front. On average, far more of their populations died (excepting France, which was knocked out early on), and while relatively few civilians were killed in WWI, WWII saw the deaths of millions of noncombatants.

If you want to understand why fighting in WWI was static and almost entirely attritional, while in WWII it was mobile and decisive, it's not aristocratic WWI generals you should be looking at, nor even tanks, but trucks and radios.

Slightly OT. The wounds the men suffered in WWI were horrendous and medical techniques for dealing with them were in their infancy. This is a wonderful story about an English Village That Did Not Stare while the men were treated with experimental/developmental cosmetic surgery. If this was posted here before, I apologize for the repetition. http://www.dailytelegraph.com.au/blogs/tim-blair/the-town-that-didnt-stare/news-story/d39ee46514b59e0adce938b8e48735d8

My mistake. The Village That Did Not Stare is WWII.

It's truly gratifying to see one of the first factual and sensible comments on WW1 by scipioamericanus (well done that man!).

The fake 'truths' about WW1 abound almost unchallenged. It's, predictably, a core subject of study at Sandhurst and The War College and yet … no-one, even with a century of study, and with benefit of hindsight, has ever come up with a better way, with what was known, and in the conditions that existed at the time, of fighting those battles or the war in general.

We British almost exclusively are held up as 'monsters'. The proven 'apocryphal' lie (by a left-wing journalist to further his own 'views') of “lions led by donkeys”, yet … the German high command (held up as tactical/strategic geniuses) … were forced to do exactly the same, no?

Incidentally, British troops were 'rotated' back from the front on a weekly basis, had every support and facility that could be made available, officers billeted with their men and led 'from the front' (unlike German officers in châteaux) and General Haig spent more time at the front, with his troops, than the combined total of every German staff officer (yet 'we' have 'distant aristocratic generals' and they have 'competent caring geniuses' – go figure!). Also, the tactical 'innovations', tanks, aircraft, rolling barrages, combined arms, were almost exclusively British.

As destructive of so many of our population (nary a town, village or hamlet here exists that didn't lose almost all the young men of that generation, look to the War-Memorials to see – e.g. of my grandfathers family of twelve, of the eight boys who all joined various pals regiments, only he survived) it was far, far more destructive of 'the aristocracy'. Literally hundreds of 'aristocratic' families simply 'ended' with all the families progeny dying 'leading from the front'.

Our culture was changed irreversibly by that war, but I suspect one of the greatest effects was the complete destruction of the 'paternalistic' and intensely patriotic aristocratic 'leadership'. Oh to have such 'aristocrats' nowadays! (and I say that as a working class 'mustang' from a long line of lower class miners and … rag-and-bone men).

Be aware that almost all the media coverage at the time and even interpretation after-the-fact has been presented in a very biased manner by those who 'had/have an agenda' (and gets almost gleefully promulgated by a certain type of anti-British … colonial, for their own 'reasons'. Which would be amusing, since 'your' aristocratic dynasties actually 'are' distant, superior, uncaring and use you like cannon-fodder, but truthfully it is really more ...'sad').