Foodies have the best fights - or, at least, the funniest.  This one - according to its headline - concerns "crimes against the tortilla".

The British ambassador in Madrid made a daring foray into the world of Spanish cuisine on Wednesday night with an appearance on a popular cooking show where he defended UK chefs over alleged "crimes" against beloved national dishes.

Simon Manley had a starring role in the 45-minute edition of El Comidista, debating the merits of British versus Spanish food and receiving a tutorial on the perfect tortilla from host and chef Mikel Lopez Iturriaga.

The pair engaged in some light-hearted sparring over alleged British crimes against Spanish cuisine, with Mr Manly offering a valiant defence of Jamie Oliver, whose takes on traditional dishes have more than once incurred the wrath of the country's foodies. 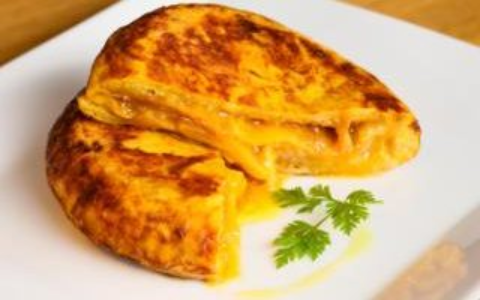 He proudly championed the "Hispano-British tortilla", though Iturriaga was not entirely convinced.

That looks more like a toasted sandwich than a tortilla to me;  but then, I like toasted sandwiches as much as I like tortillas, so I'll gladly eat either.  Unfortunately, I'm supposed to be limiting my carbohydrate intake, so both are off my menu at the moment . . . (sob!)

I'm pretty sure that the Spanish and Mexican definition of a tortilla is not the same. Isn't the Spanish version essentially a fritata?

The Jamie Oliver thing looks more like a quesadilla and the 'breakfast tortilla' is a tostada if served and eaten open face. But, hey, what do I know, I'm just a WASP who has been eating Mexican food since I was a young pup.

HEATHENS! Fritatta is a thin and tasteless version of the Spanish Tortilla. What the Mexicans call tortilla is some weird shit, but they are Mexicans so you let them be.

My 85 year old Spanish mother saw the photo of the tortilla and cussed the "shitty" cook (her actual words in Spanish were much saltier) and wondered why was it hollow in parts.

And raw onions in a Spanish Tortilla is "prohibido!" At a minimum, they beed to fry till they are soft, usually done with the potatos.

Behold what an Spanish Omelette is supposed to look like: Taters, onions and ham on this particular one.

Besides, in British English, that is a "torr-TILL-uh".

I know this because I was told this by the kind staff at Barburrito at Paddington Railway Station. :-)

It was packed with the things that any Texan might suggest go into it, but I was also asked whether I'd like some "SOWL-suh" on it.

So I was happy to have something resembling food I knew and understood since well before the server was born, but I realized I was even happier not to have ordered a "torta".

That 1st picture appears to be a breakfast pita to me.

Perfect timing to read this post. I just finished a couple of flour tortillas (pronounced tore-tea-yahs, roll that 'r' if you are attempting to speak it like the Spanish do ) with bacon, cheese, egg and crushed red pepper. Breakfast was awesome !