Lawdog is published at last!


I'm absolutely delighted to announce that my buddy Lawdog's first book, titled simply 'The Lawdog Files', has been published. 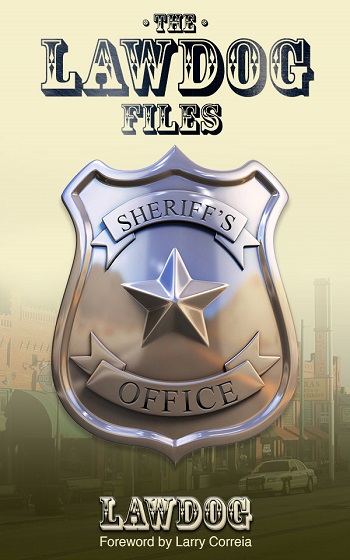 It's currently available in e-book format from Amazon.com.  A print edition will follow within a few weeks, almost certainly by mid-August.

LawDog had the honor of representing law and order in the Texas town of Bugscuffle as a Sheriff's Deputy, where he became notorious for, among other things, the famous Case of the Pink Gorilla Suit. In THE LAWDOG FILES, he chronicles his official encounters with everything from naked bikers, combative eco-warriors, suicidal drunks, respectful methheads, prison tattoo artists, and creepy children to six-foot chickens and lethal chihuahuas.

THE LAWDOG FILES range from the bittersweet to the explosively hilarious, as LawDog relates his unforgettable experiences in a laconic, self-deprecating manner that is funny in its own right. The book is more than mere entertainment, it is an education in two English dialects, Police and Texas Country. And underlying the humor is an unmistakable sympathy for society's less fortunate - and in most cases, significantly less intelligent - whose encounters with the law are an all-too-frequent affair.


Those of you familiar with Lawdog's blog will have read many of the stories, although they've been revised for this volume; and there's some fresh material as well, that will be new to you.  He's already hard at work on a second volume, which will describe his childhood in Africa.  Well-known and beloved tales from that continent, such as Squeaks the mongoose, Brigadier-Captain Azikiwe and the ratel, and many more (including new material), will be included.  (I might add that Lawdog probably has more than enough material for a third book of stories.  His arm is being heavily twisted about that right now!)

Lawdog has also been trying his hand at an urban fantasy novel.  I've been able to read some of his rough chapter drafts, and I'm here to tell you, it's good.  The man can tell a tale.  I think it may be in the same league as Jim Butcher and Larry Correia, which says a great deal, right there.  If all goes well, I hope we can look forward to it sometime next year.

I can't recommend 'The Lawdog Files' too highly.  Miss D. and I have been part of the friends-and-editors process in bringing it to life, and we've found ourselves howling with mirth at frequent intervals while reading excerpts.  Be careful where you read it.  As many early reviewers have pointed out, explosive bursts of laughter are guaranteed!

His tales serve well when adapted, too!! We were able (with permission) to use his African mongoose-tale as a middle-school forensics piece for several years, and the kids who used it came out winners at the State level.

My cats are now in hiding from all the laughing and I am in trouble for waking my wife up! Lawdog does know how to paint a picture with words.

Just bought my copy. I'm looking forward to reading it.

You and him need to write the African tales together.
Just my opinion.