A 90-year-old shotgun gets a new lease on life


For some time I've wanted a shotgun that will 'take down' - i.e. one that can be disassembled into two halves, for ease of transport, and also so that it doesn't scream 'Long gun!' to anyone seeing me carry it in a rifle sleeve or case.  In particular, I wanted it with me as a travel gun, to have something hard-hitting on hand in hotel rooms, just in case.  (A handgun's all very well, but if you really need to defend yourself against a determined criminal, a bit more energy and 'thump' is appreciated.  See the chart in this article for details.)

The quintessential 'take down' shotguns are the John Moses Browning-designed Winchester Model 1897 and its successor, the Model 12;  but they're expensive, frequently costing $500 upwards in good condition, despite their age.  Also, there's a certain reluctance to chop up such classic guns for defensive purposes.  Therefore, I looked for cheaper alternatives, that would not be any great loss to collectors if cut down for use in confined quarters like a hotel room.

A couple of years ago, I lucked into a Montgomery Ward Western Field Model 30.  This was a store-branded version of the Stevens Model 520, another John Moses Browning design that was produced between 1909 and 1955 in a number of versions.  When I got it, mine looked something like this, albeit in somewhat poorer surface condition (click the image for a slightly larger view).

However, the mechanical components looked to be in good working order, which was the most important thing.

Inspection, and a serial number check, revealed it to be the version manufactured in 1926-27.  This image, courtesy of Wikipedia, reveals the elements that identify it as such.  The firearm depicted is the Ranger model, made as a house brand for Sears, but otherwise identical to the 'Western Field' model made for Montgomery Ward.  The only difference between them and the Stevens originals was the model name engraved on the side plate.  Note the safety catch inside the trigger guard.  It's pulled back to render the weapon safe, and pushed forward to fire it - not the most desirable feature, as one's finger is thus altogether too close for comfort to the 'bang switch', but those ergonomics were acceptable in those days (the famous M1 Garand rifle, the standard US service rifle during World War II, uses a similar system).  One simply has to be careful when handling it. 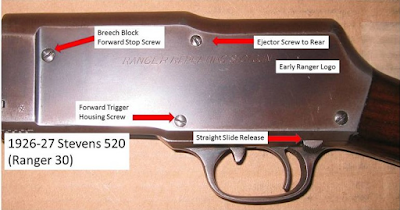 The takedown mechanism for the Stevens 520/Sears Ranger/Montgomery Ward Model 30 is ingenious, and very strong.  Here's a video clip illustrating how it works. I recommend watching it in full-screen mode to see the details.

I sent the shotgun off to my friend and Blogorado comrade, Joe Speer, for him to work his gunsmithing magic on it.  He shortened the barrel to the legal minimum, and replaced the original brass bead with a red fiber-optic unit that's easier and faster for my aging eyes to pick up in a hurry.  He also went over all the mechanical parts, cleaning them up and making sure everything was in good working order.  At my request, he shortened the stock and fitted a modern, highly absorbent recoil pad that will make shooting the gun much more comfortable.  Finally, he applied a Cerakote finish to the entire shotgun, providing a thoroughly modern, weather-resistant finish that also looks very good.  (He said he had a terrible time getting the finish to 'take', and had to repeat the process three times.  Thank goodness Joe's a patient man who pays attention to detail!)

Here's how the finished product looked this afternoon.  Click the image for a much larger view.

Thanks, Joe!  You did a great job, as usual.

The shotgun will now become my traveling companion when I think it might be needed.  I can divide it into two halves and transport it in an ordinary duffel bag, or even a shoulder bag if necessary.  Loaded with Federal #1 buckshot (using that company's Flite Control wad to hold the pattern together to extend the round's effective range), it should provide an additional level of social persuasion, in the unlikely (and unfortunate) event that it might be required.

That looks real good, and an excellent idea. I may have to contact your friend to get my pistol looked at.

How much did it cost you for the work?

Interesting. That motivates me to take another look at a Western Field 12 gauge project gun that I laid aside 10 + years ago. I was completely unaware that those were take down guns. Hmm.....

I recently completed a similar project on an interwar commercial Stevens 620. I took it a step further: added a repro M97 heatshield/bayo lug, period sling and rear mount, for a replica Trench gun.
Quite the head-turner if I do say so.

@Anonymous at 8:03 PM: It cost a lot - more, in fact, than the shotgun was worth, so from an economic perspective, I wasted a lot of money. On the other hand, this project wasn't undertaken for economic reasons. It gives me peace of mind while traveling to know that, if necessary, I have something powerful as my primary close-quarters weapon, backed up by my handgun and spare magazines. With those tools, my wife and I are better positioned to survive an unexpected and unwanted encounter. That's worth a lot more than mere money to me!

Sometimes some real deals can be had with those store brands. A couple years ago I picked up a Ted Williams Model 100 for a pittance. Nothing but a Model 94 Winchester with the name of a baseball legend on it.

The reason that I asked is because I have an almost identical SGN, it is the Sear Ranger model, same exact break-down and classic Browning humpback.

I have always wanted to revitalize it for the exact same reasons you mentioned. I would love to have it smoothed inside, and refinished outside.
I wonder if a Magpul SGN stock could be adapted to it?

Do you sometimes wonder if the demise of both Sears and Montgomery Ward was their sudden desire to stop selling firearms? After Dicks pulled their model rifle off the shelves and cancelled and refunded existing backorders to people who bought from them in good faith, I pretty much stopped going to Dicks for anything.

That is a very cool take-down feature I have never seen before. Very clever. Thanks for the pictures of how that works.

My home defense shotguns are Remington 870's. They have the 21" Turkey Hunter barrels. Unscrew magazine cap, remove barrel - done. Not as short as your firearm though.

Joe does good work, and that thing looks sweet.

A suggestion for further utility is to use reduced recoil loads. At standard for defence ranges the penetration is the same as full power loads and the second shot is much faster. It is easier on aging bodies and old backs also.

Well, now you've done it. I want one too. Another Sears brand to look for is J. C. Higgins---

The model 50 and 51 were every bit as good as the Winchester model 70. They were referred to as "the Cadillac rifle with the dime store pedigree".

Do you sometimes wonder if the demise of both Sears and Montgomery Ward was their sudden desire to stop selling firearms?

As my father in law would say that shotgun looks like it kills at both ends. The recoil pad should help.

I have one that I love. It was my dad's and he bagged a lot of pheasants with it. It was a rental gun at a gas station in SD, and he bought it from them after having rented it for road hunting a number of times back in the 30's. Really fun to shoot.

A Walmart camping chair with bag costs ~$18. The bag conceals everything from AR's to AK's to 18" shotguns - and it looks like a camp chair bag :-)