This is fiscally obscene


If you can read a report like this without being horrified, there's something wrong with you.

Both the Congressional Budget Office and the White House Office of Management and Budget project that federal spending will top $4 trillion for the first time in fiscal 2017, which began on Oct. 1, 2016 and will end on Sept. 30.

Consider that according to the US Debt Clock, federal government debt currently looks like this (as of 5:15 AM Central time this morning):

Consider also that the budget deficit listed in the graphic above is the amount that the federal government will have to borrow during the current year, to make up the $4-trillion-plus that it wants to spend.  In other words, it will increase the national debt by that much (less any debt that is paid off during the year).

The brutal reality is, we're teetering on the edge of national bankruptcy.  Yes, I know, the federal government can simply 'print money' to pay off the national debt if it wishes;  but that will also cause so much inflation as to render our currency meaningless.  Think Weimar Germany.  Furthermore, federal government debt, horrendous though it is, is merely a reflection of our individual and household borrowing habits.  According to Debt.org:

Household debt (mortgage + home equity loans + credit cards + student loans + auto loans) in the United States reached $12.58 trillion at the end of 2016, an astonishing rise of $460 billion for the year. The typical American household carries an average debt of $134,643.

America’s median income has risen 28% since 2003, but the cost of living has increased 30% during that span. Meanwhile, medical costs are up by 57%, while food and beverage prices have risen 36%.

I took a look at the four categories outlined in the article above - mortgages, student loans, auto loans and credit card debt - and analyzed our family's position relative to the numbers it provides.  We're doing far better than the average figures listed, and we're trying hard to get to zero on every one of them (for example, we want to pay off our house within ten years from the date of purchase, if possible).  I'm sure many of my readers are doing likewise, trying to get to and stay in a financially sound, healthy position.  However, many - probably most - Americans are either not trying to do that, or they aren't in a financial position to do so, thanks to unemployment, poor salaries, and the crushing burden of medical costs.  That's why household borrowing has risen so high.  It's an attempt to cope with those realities . . . but it's a two-edged sword.  It may help us cope with them in the short term, but in the long term it becomes a financial noose around our necks.

The US government is in the same position.  Five years ago, US News pointed out:

Spending on entitlements is the highest in American history. In 2010, entitlement spending had grown to be almost 100 times higher than it was in 1960; it has increased by an explosive 9.5 percent per year for 50 straight years. Entitlement transfer payments to individuals (such as for income, healthcare, age, and unemployment) have been growing twice as fast as per capita income for 20 years, totaling $2.2 trillion in 2010 alone—which was greater than the entire gross domestic product of Italy and roughly the same as the GDP of Great Britain.

In 1960, entitlement spending accounted for less than a third of all federal spending; in 2010, it was just about two thirds of government outlays, with everything else—defense, justice, all the other duties of government—making up less than one third. Over the last half-century, income-related assistance (which we used to call "welfare") multiplied more than thirtyfold after adjusting for inflation. The most shocking growth has been in Medicare and Medicaid. In the early 1960s, neither program existed; by 2010, these two programs cost more than $900 billion a year.

More Americans rely on government handouts than ever before. The United States is on the brink of disaster now: Half of all American households currently receive transfer payments from the government. According to the Census Bureau, only 30 percent of American households in the 1980s relied on any public assistance.

The situation has gotten worse since then.  According to the Heritage Foundation, by 2032 the US government's entire tax revenue will be consumed in paying for health care, social security, and payment of interest on the national debt.  All other expenditure will have to be funded by borrowing. 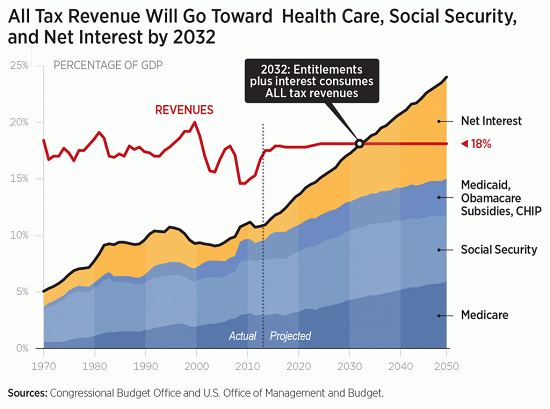 We not only have to cut entitlement programs, we have to cut the incessant growth in government spending.  How to do that, in an era when at least half the US population is dependent to a greater or lesser extent on government subsidies and handouts, is an almost insoluble conundrum.  It's why I, and many others, are trying to preach the gospel of fiscal conservatism;  live within your means, save for a rainy day, stock up on essentials against a time when you may not be able to afford them (or they may not be available when needed).  That way, if - or, rather, when - the crunch comes, we'll at least be in a more stable position to ride it out.  It'll still be painful as hell, but it may at least be more survivable for us.

Each and every one of our households will be liable for well over $30,000 of US government spending this fiscal year alone.  That's . . . that's obscene.  There's no other word for it.

A significant percentage of those "dependent on Government" are choosing not to work and/or finding ways to get the freebies while working.

When a work requirement was put in place in several states, the welfare rolls dropped by in excess of 40%. Same with drug tests.

We,as a nation, subsidize laziness....so we get more of it.

My wife passed last year, so I've just sold the house, donated most of our fifty-year collection of stuff to the Church, paid of the car, and moved into an over-55 active community. My debt load is now zero.

All my financial obligations are now generated and paid for monthly. My funeral services and cremation costs are already paid for. I will leave no obligations of any sort to my children, no bills, no garage or storage locker full of stuff, nothing.

Although I am 78, I am in good health, and - thanks to the miracle of modern medicine and a reasonable lifestyle - I can, however and wherever possible, enjoy the rest of my days worry free.

My great regret is that my wife of a half-century is not here to share in this beautiful sunset of my life.

Knock on wood.... There are massive storm clouds on the near horizon.

I don't quite know what to say.

I pay the Visa off each month; I use it so as not to carry a lot of cash and to be able to track my expenditures. I own my own home, humble though it may be. It's comfortable and the neighbors are nice.

Both Federal and State governments are so far in debt they'll never recover in my lifetime.

When I was a child 50 plus years ago there were obscene things I was protected from. Today those same things are on network television. I have accepted the reality that my children will have a much worse future as the cycle of history continues to swing from one extreme to another.

Agreed with SiG - that's a better picture than I expected, while still being terrible. It also makes me wish we could use that $30k per household number to definitively answer the question of whether or not we as taxpayers are "paying our fair share". Somehow I suspect that most of the people whining for higher taxes probably haven't hit that number personally.

Yes, and if you want to even just slow down, much less cut, the rate of growth of the debt freight train you're accused of being a heartless monster that wants the poor to starve in the streets.

Expect the can to keep on being kicked down the road until it can't be kicked any longer.

SSN is not an entitlement. I've paid into it for 40+ years.

that being said parts of it have left what it originally was.

We are coming for a crash. Might be engineered by the deep state but we will have to see.

"We are oft to blame in this,
'tis too much proved; that with devotion's visage
and pious action, we do sugar o'er
The Devil himself."

Paul, SSN absolutely is an entitlement. It is not and never has been a retirement account, despite common perceptions. The government defined it as a tax in court challenges at the inception of the program, and you have been paying that tax for 40+ years, and I have as well for almost 20. However, the money hasn't been careful saved up to be redistributed later - it was all spent as soon as it came in. The "trust fund" is simply a set of bonds which are just draws upon the general revenue now to pay back the money that was spent then, which in turn just means the government borrows even more to pay any benefits that exceed current revenue.

The expectation that the government will pay you, me, or anyone else money under any program is the definition of an entitlement. The fact that we have been paying a tax to fund the program for significant periods of time doesn't change the nature of the program, although it does (reasonably) make the people who expect to be the beneficiaries of those programs feel much more "entitled" to them than your average welfare recipient should feel. That said, what cannot be paid won't be paid, and it won't be long before the money simply isn't there. If you are planning on SS being a significant part of your retirement income, I would make other plans.