I'm fascinated to learn that a carbon fiber version of the 70-year-old Antonov An-2 biplane has been developed in Russia.  It made its first flight just last week, and is now being exhibited in Moscow.

The Siberian Aeronautical Research Institute (SibNIA) plans to certificate the new model ... within two years, then promote the aircraft to passenger and cargo operators, says Oleg Parfentyev, adviser to the chairman of SibNIA for aviation projects ... Parfentyev describes how Russian carriers now fly four-engined Antonov An-12s from Moscow to Novosibirsk, where the payload is redistributed to smaller cities. A fleet of TVS-2DTS aircraft would allow the same operators to fly direct to the secondary cities, bypassing the hub stop at Novosibirsk, he says.

The original An-2 first flew in 1947.  It used the forward fuselage of a Douglas C-47 transport (license-built in the Soviet Union as the Lisunov Li-2), shortened, with a single radial engine in the nose, and biplane wings covered in cloth.  It could carry up to 12 passengers, or up to about 2¼ tons of payload. 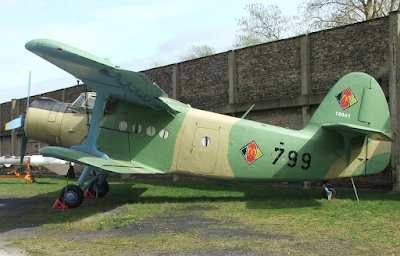 A turboprop version was developed in the 1980's as the Antonov An-3, but didn't attract much customer interest.  Hundreds, possibly thousands, of the original An-2 model are still flying in Russia and China, particularly in regions with rough-and-ready airstrips (or no airfields at all).  It's a quintessential "bush aircraft".  North Korean special forces use it as a raiding platform, because its wood and canvas construction doesn't show up very well on modern radar, and it flies so slowly (cruising speed is about 100 mph) that modern fighter aircraft can't fly slow enough to keep station on it, and shoot it down.

SibNIA began developing its 'Westernized' version of the An-2 a few years ago.  In 2012 it flew an aircraft with a Honeywell turboprop engine and a 5-bladed modern propeller.  This proved successful in flight tests, and the Institute decided to modernize it further, in the hope of attracting interest from the owners of hundreds of An-2's still operating.  They first developed a fully composite wing, made of carbon fiber, which they flew attached to an original fuselage fitted with the Honeywell engine and new propeller.  Here's a 2015 video showing it in flight.

The latest version, now on display in Moscow, adds a carbon fiber fuselage to the wing, meaning that the entire aircraft is now of composite construction.

Whether or not this ultra-modern edition of a 70-year-old biplane can achieve commercial success remains to be seen.  Nevertheless, I have a feeling that, somewhere up there, the shade of Oleg Antonov is smiling.

"Certain" people will want it for the LO capability... Just sayin...

What is the probability of putting automation in these and turning them into cargo drones? Maybe one pilot with a computer backup rather than a co-pilot?

Presents an interesting question. Is stealth/low observable technology in private hands regulated? Granted you'd generally need to fly "unstealthed" with radar reflectors and transponders but if you could flip a switch and "stealth up" your private aircraft like a B-2 does when it goes into mission mode and switch off your transponder would it be legal? If you were operating in uncontrolled airspace under visual flight rules, is it a requirement that you must have a minimum radar cross section?

Also a very popular skydiving plane. and at 12,500 lbs, the largest plane you can fly without a Type certificate.

I saw one of these beasts take off at an air show at the Hawthorne,
CA municipal airport back in the 90s. The surface area of the wings
on this gargantuan bi-plane was massive.

An Olympian runner could keep up with this plane up to the point of
take-off. This is just a wild estimate, but the wheels were off
the ground by the time it hit 30MPH!

What's the current North American equivalent to this? Cessna 208 Caravan?