The great Cottingley Fairies hoax, one hundred years ago


An article in the Telegraph reminded me of the great Cottingley Fairies hoax of 1917.  It fooled a great many people.  Here's an excerpt.

... the house in Main Street was occupied by Arthur and Polly Wright and their only daughter, Elsie. Arthur was an electrical engineer and keen amateur photographer, the proud owner of a Midg quarter-plate camera, an expensive piece of kit for the time. Also living with them, temporarily, were Polly’s sister Annie Griffiths and her daughter Frances, who had made the perilous wartime sea journey from South Africa.

By 1917, Elsie was 15 and Frances nine. The girls became firm friends and played together in the dell, often coming home soaking wet and covered in mud.

It was Elsie who first started blaming fairies for their dishevelled appearance, and an amused Arthur indulged them with the loan of his precious camera to allow them to “prove” the Little Folk were real.

The girls duly obliged and returned the Midg with two glass plates ready for developing in the darkroom Arthur had built for himself in the cellar. He was somewhat taken aback to see the images slowly emerging of Frances, wearing a string of flowers in her hair, watching a quartet of dancing, winged fairies on a tree stump in front of her, and another showing Elsie sitting in the grass, greeting what the girls said was a gnome. 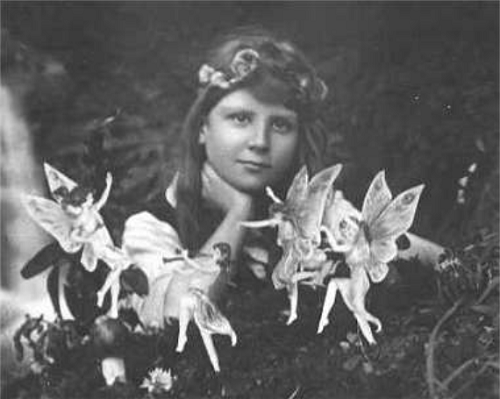 Arthur’s Midg camera resides in the National Science and Media Museum in nearby Bradford. The museum’s head of collections, Michael Terwey, reverently holds it up, explaining how it held a magazine of glass plates covered with photographic emulsion.

“People wanted to believe in the photographs,” says Terwey. “The very idea that these beings had apparently been captured by a camera gave an air of scientific credibility. There were constant references made to the trustworthiness of the family, the fact they hadn’t done it for money, so why would they make it up?”

Looking at the photographs now, with a sophisticated 21st-century eye, it seems incredible that anyone was taken in. It’s obvious the fairies are what they were indeed later revealed to be: drawings by Elsie cut out and stuck in the ground with hatpins.

But perhaps the horrors of the First World War meant people were desperate to embrace something more positive, more spiritual. Terwey says “spirit photography”, and the belief that cameras could capture what the human eye could not see, experienced a great boom in the years surrounding the end of the Great War, as desperate families clung on to some slim hope that those they had lost in the conflict could be contacted on “the other side”.

Still, the first two photographs weren’t taken wholly seriously by the Wrights and might have remained a family joke but for Elsie’s mother, Polly, who attended a meeting in Bradford of the Theosophical Society, the organisation set up in the 19th century to discuss and debate matters spiritual, religious and unexplained.

The talk was on fairies, and Polly showed the speaker the photographs Elsie and Frances had taken. The Theosophical Society was instantly captivated, and displayed the pictures some months later at the society’s annual meeting.

From there, to use modern parlance, they went viral, earning the clear stamp of approval from photography experts who declared them genuine, and eventually coming to the attention of Conan Doyle, who had been commissioned to write a feature on fairy lore for The Strand magazine.

Conan Doyle secured permission from the Wrights to use the two photographs, and made a gift to the girls of a Kodak Cameo camera to obtain further “evidence”, which they duly did, producing three more images of Frances smiling at a leaping fairy, a fairy offering a posy of harebells to Elsie, and another captioned “The Fairies and Their Sun-Bath”, all of which were published in 1920.


There's more at the link.  You can read more about the hoax here.

It's an amusing tale.  One would hope we wouldn't be taken in by it if it happened today;  yet, given today's weird fascination with UFO's, a non-existent "Planet Nibiru" and its threatened apocalyptic disaster, and so on, it looks like we're just as credulous now as the experts were a century ago!

Conan Doyle was taken in by a lot of things.