I was amazed to read that three of Barnes Wallis' so-called 'bouncing bomb' prototypes have been recovered from a Scottish loch where they were tested, more than 70 years ago.  These are examples of the 'Highball', a smaller version of the 'Upkeep' bombs used in the world-famous 'Dam Busters' raid in 1943.  'Highball' was intended to attack ships, rather than dams.  A Royal Navy press release announced:

A team of Royal Navy clearance divers from the Faslane-based Northern Diving Group (NDG) have assisted in the recovery of historic World War Two bouncing bombs from the bottom of Loch Striven. On Wednesday, July 19, three of the famous “Highball” bombs broke the surface of the Argyll Loch for the first time in over 70 years.  They were among an estimated 200 of the Barnes Wallis designed munitions tested on the loch ahead of the famous Dam Busters raid in 1943. 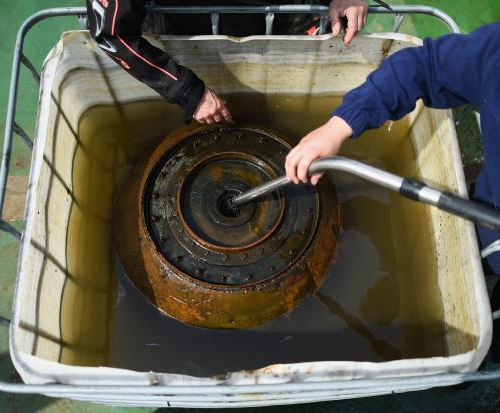 The concept of the bouncing bomb was first described by engineer Sir Barnes Wallis in 1942 and was originally envisioned for use by the Fleet Air Arm.  However, in November 1942 the project was split into two strands – codenamed “Highball” and “Upkeep” – with one weapon designed for use against ships and the other, heavier, Upkeep bombs for targeting dams.

The unique design of the bombs meant they could skip over the surface of the water, avoiding anti-torpedo nets and defences, to hit their targets.

Many of the spherical Highball bouncing bombs were tested on Loch Striven, with bombers from RAF Turnberry flying up the loch to bounce their bombs towards old ships which were used as targets.

Footage from the tests was gathered for analysis by photographers from the Marine Aircraft Experimental Establishment (MAEE) at RAF Helensburgh and was eventually seen by hundreds of thousands of people after it was used in the 1955 film “The Dam Busters”.

The project to raise the Highball bombs is an important one as there are currently no examples on public display.  The recovered munitions will eventually be re-homed in the Brooklands Museum in Surrey and de Havilland Aircraft Museum in Hertfordshire in time for the 75th anniversary of the Dam Busters raid next year.


There's more at the link, including more photographs.

This is a fascinating piece of military history, and something I'd never expected.  I'd thought that the testing prototypes would have been recovered at the time, or would long since have rotted away.  It's amazing that they've survived this long, and in such good condition.

Here's actual World War II footage of the 'Highball' tests, including some at Loch Striven.  It's silent, so don't adjust your speakers.

If it's given to our souls to know about such events after our deaths, I daresay there are a number of the shades of the members of 617 Squadron, and others involved in the development and use of 'bouncing bombs', who are smiling nostalgically, somewhere up there . . .

Odd. Seems that the bomb rotation is reversed for the dirt bounce testing. After it bounces back from the impact wall, it is clearly spinning, and when it slows enough to get traction, it starts moving toward the wall. IIRC, the water bombs were spun backward, so they wouldn't just dig into the surface and sink. I wonder if the dramatic difference between the dirt and water splashes is due to spin direction?

Dambusters, bouncing bombs, and Mosquito bombers. It's a good day. Foundries in my hometown made the undercarriage for them, so I have a special fondness of those aircraft. Probably the only ones that would have been able to deliver them safely from the footage seen here.

Interesting footage. The first attempt on a dam was a failure, however, due to the action of a single German guard. The event was captured on film.

Cold fresh water! Like the high quality shipwrecks in the Great Lakes, there is very little deterioration at depth.