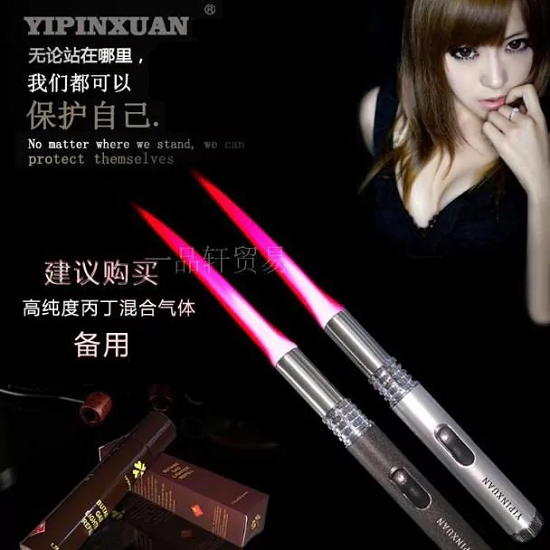 A flame-thrower that can hurl a stream of fire half a metre [almost 20"] long is being marketed in China to help women fend off unwanted advances.

The device is being billed on shopping websites as a must-have "anti-pervert weapon" that can be discreetly carried in a ladies’ handbag.

Some are shaped like a cigarette lighter and emit small flames, while others hurl fire for 50cm with temperatures of up to 1,800 degrees Celsius (3,300 Fahrenheit).

The flame-throwers sell from about £10 to over £30 [US $13 to over $40] on e-commerce sites, and one vendor boasted to local media how they can "scald or even disfigure an attacker.”

There is concern that the flame-throwers could become the latest dangerous gadget to become popular in China, following a fad among some children for tiny crossbows which can shoot toothpicks or needles.

Concerns have also been raised that the devices can cause injury to the person carrying them, as the switch can be accidentally turned on while it is in a handbag.

I can think of so many ways that would be useful . . .

As for accidentally lighting it in your handbag or pocket . . . well, you won't make that mistake twice, will you?

now if they could make it sound like a light saber, its already the first thing I would have to have if I were 13 years old again... I mean actually.

"Assailed by a gangsta thug with his trousers already halfway down? Talk about an inviting target, right there!"

The thing I've always wanted to know about the droopy-drawers set is, how often does some passerby give in to the temptation to give them and Atomic Wedgie?

Whatever happen to a set of keys raked across somebody's face or a knee in the family jewels or the heel of your shoe on the instep of someone's foot? Teaching some self-defense goes a long way to encouraging everyone to keep their hands to themselves.