Gender, schmender. The chromosomes have it.


I see the gender-fluid brigade is at it again.

The issue with gender-reveal parties in particular is: Aren't they potentially damaging to said tiny humans?

For starters, gender-reveal parties don't actually reveal gender—they reveal anatomy. Gender is a wholly different thing, inextricably tied to the social constructs around it ... A gender reveal conflates the two.

Projecting gender perceptions onto a fetus becomes especially thorny when you take into consideration that, globally, one in every 1000 to 1500 children is born with a visible form of Difference of Sex Development (DSD), which means being neither entirely male nor female, since the chromosomal/genital makeup falls somewhere in between—an enlarged clitoris capable of erections, for instance. (Broader definitions of DSD put this number closer to 1 in 100 children.) Then there are the millions of kids assigned a sex at birth with which they don't align: 150,000 American teenagers identify as transgender. In a ritual that celebrates only a binary way of thinking about identity, we're leaving a cross-section of the population out, adding to a culture of trans and intersex shame.


There's more at the link (although why anyone in his or her right mind would want to read it, I can't say).

I disagree emphatically that gender, as a concept, is distinct from sex.  That's a modern construct that was never, repeat, NEVER a major issue until the rise of the feminist and LGBTBBQWTF brigades.  In order to be precise, let's look at a dictionary definition (the Free Dictionary, in this case) of the term 'gender'.  (Click the image for a larger view.  See, in particular, the 'Usage Note' provided.) 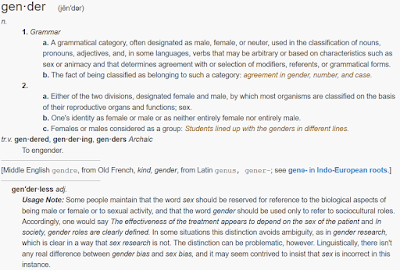 Contrast that with the Free Dictionary's definition of 'sex'.

On the basis of those definitions, about the only thing I have against gender-reveal parties is that they should more accurately be called sex-reveal parties . . . but I can understand the potential confusion that might engender (you should pardon the expression).

The author tries to assert, in the excerpt shown above, that the condition known as intersex is more common than scientifically accepted.  It's a real condition, and I have the greatest sympathy for those born with that handicap;  but it's vanishingly rare - less than one-tenth of one per cent of the human race, according to every authentic, objective, medical-evidence-based, non-politically-correct study of which I'm aware.  Intersex can't be used as an excuse by those who have some sort of psychological or psychiatric hangup about their sexuality (as distinct from the reality of their physical sex), and want to project that onto the rest of us, and force us to play-act accordingly.  The overwhelming majority of them are not intersex.

As far as I'm aware, from the perspective of medical science, with the sole exception of those afflicted with one or other form of intersex syndrome, one's sex is determined by one's chromosomes.  If you're XX, you're female.  If you're XY, you're male.  That's it.  You may feel you're a different gender, such as a man trapped in a woman's body, or vice versa;  you may believe that you're not what your sex organs say you are;  you may want to identify as any one (or more) of the 58 gender options offered by Facebook;  but you are, inescapably, a man or a woman, according to your chromosomes.  End of story.

For gender-reveal parties to operate on the basis of medical and scientific reality, rather than wishful thinking, seems to me to be no more than a recognition of the real facts of life.

Gender-reveal parties are definitely harmful if gunmen break into the party and start shooting, as happened last week about 5 miles away from here. As details from the continuing investigation emerged, it turns out the supposed expectant mother wasn't even pregnant. Still not a great party.

I identify as a 28 yr. old handsome millilnare.. but my bank manager just laughs...

I think I liked it better when we discovered the sex of our babies at the moment of birth. It was easier then. Indoor plumbing meant we had a daughter and outdoor plumbing was a son. Pretty straightforward. No confusion. The confusion starts when folks want to legitimize lifestyles that require changing the natural order of things.

It will take a while - how long is anyone's guess - but this crap will be self-solving.

When - not if - the SHTF, to whatever degree it does so, those currently with sufficient time and resources to pontificate about genital hardware and its philosophical flexibility will be among the first to quite firmly encounter The Hard Truths.

Until that point, I suppose, the rest of us will be blessed with their opinions, desires and wishes. Since they seem omnipresent thanks to their supporters and advocates in media it is, indeed, a PITA to be forced to mentally and socially avoid collision with them, but as long as it remains mere inconvenience that's easily accomplished.

This is what happens when a society has too much time on their hands and the threat of survival isn't an issue, then you have too much time to "gaze and pick at your navel lint" and not worry about eating. We as a society have become too soft and too permissive of the less than 3% of the population that is driving the agenda. They will always be looking for the next outrage, and it ain't gonna end until society finally says "enough the stupid crap". Until that happens, it will get worse.

If you expand the "intersex" conditions the way these activists want to, what you're actually doing is enshrining an incredibly restrictive ideal of what constitutes "male" or "female", and telling vast numbers of people that they're something else because they don't fit an artificially restrictive image.

There's a condition called body integrity disorder where people with totally normal arms and legs "identify" as amputees, and seek to get their unwanted limbs cut off. I've even heard of doctors doing it.

I don't think anyone wouldn't say that was mental illness.

But change the limb they want amputated to a penis and suddenly it's all fine. We're being haters if we say it's a mental illness.

Sorry, but "feeling you're the wrong sex" is a mental illness.

As someone who has lived most of his life in the SF Bay Area I have had to deal with these issues from time to time.
Since I don't take life too seriously this lead to a very effective "Pick up line" , especially with College girls who were LUG ( Lesbian until Graduation)
"Can't you just think of me as a Lesbian trapped in a Man's body?"
It worked close to half of the time.
I'll add that I am not at all effeminate in looks, manner or voice...
If you live near a College, give it a try.

You can believe you're Napoleon for all I care.
But I won't address you as an emperor.
.
Bruce can prance around in high heels.
But he's still Bruce.
And I really don't give a flying &$$& if reality offends him.

I can think of no clearer example of "harm to self" than self-mutilation.