. . . would smell as sweet, according to William Shakespeare.  Clearly, he wasn't thinking of Star Wars when he said that - unlike the parents of a hapless felon in Tennessee.

The Force was not with Luke Sky Walker when he was arrested this week by Tennessee police, according to a report.

Walker, 21, of Johnson City, Tenn., was arrested Thursday on a charge of violating probation, WJHL-TV reports ... He was arrested in 2017 on charges of stealing 46 road signs with three cohorts, the Elizabethton Star reported at the time.

Actor Mark Hamill played the character Luke Skywalker in the Star Wars movies.  I enjoyed his reaction to the news of his namesake's arrest. 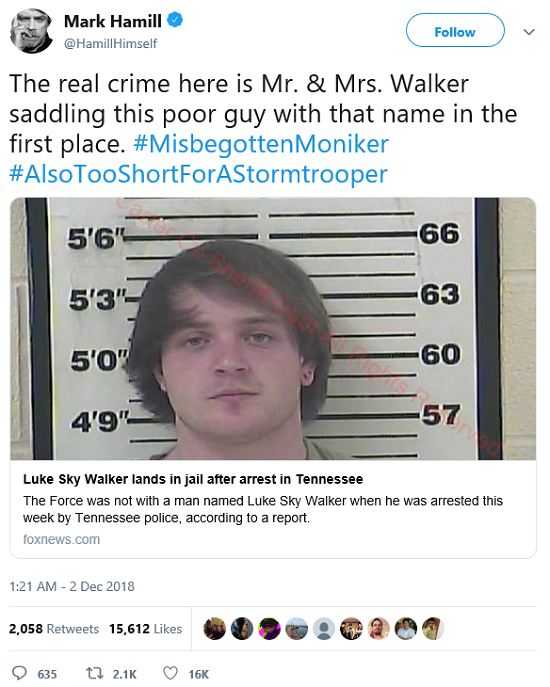 A tough name to live with I'd think.
A big time criminal too, not one, not two but 46 road signs!

I love Mark Hamill's response.
Leia: "Aren't you a little short for a stormtrooper?..."

You have to despise the type of parents who try to be "clever" and "creative" when deciding what to name their offspring.
The ultimate epitome of the definition of "vainglory" and "grandstanding", for sure.

"These aren't the road signs you're looking for."