Puns on an interstellar scale


I laughed out loud to see Friday's XKCD cartoon.  Click the image to be taken to its Web page, where you can read the mouseover text as well. 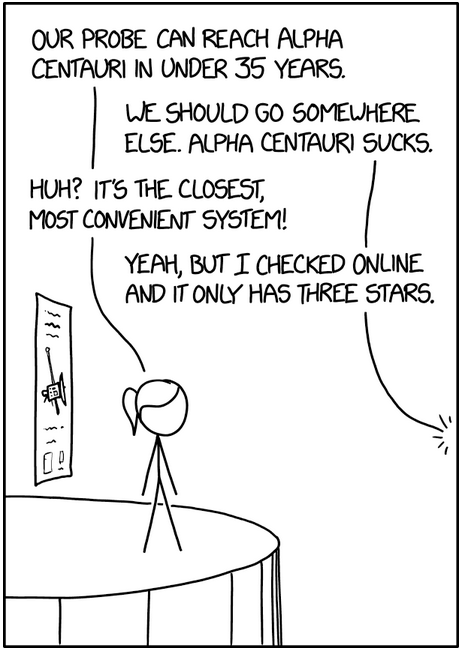 The point, of course, for those who aren't into astronomy, is that there are precisely three stars in the Alpha Centauri system.  The cartoon conflates that fact with three-star consumer reviews.

I do enjoy it when practitioners of science, or medicine, or any other discipline, poke fun at themselves.  It lightens the air for everyone.  I still giggle at the memory of my sister's midwifery training at Groote Schuur hospital in Cape Town, many decades ago.  At one point there was a spate of "blue babies", infants who were not breathing, or not breathing properly, at birth.  To jolt her trainee midwives into being more aware of the problem, the matron in charge of that class put up a notice in the break room.  In large capital letters, it warned:

THE FIRST FIVE MINUTES OF LIFE ARE THE MOST DANGEROUS!


It didn't take long before someone added, in equally bold print:

THE LAST FIVE MINUTES ARE A BIT DODGY, TOO!

That's comedy from a black hole, even worse that the poisonous clouds of gas surrounding Uranus. And we know that just as humans get hemorrhoids, Uranus gets asteroids. NASA knows this because they sent a probe to, well, you know where.
But unexpectedly, they did find that while there may not be a Restaurant At The End Of The Universe, there is a restaurant on Pluto. The fare is a little meteor than they expected, but the place has no atmosphere.
Even more amazing, the 10-year-old puzzle-fanatic son of one of the Hubble mission planners has finally confirmed that there is life out there. When he connected the dots of the stars in one of the latest pictures, it spelled out "Why so Sirius?"

Inside an elevator at a nuclear power plant: "IN CASE OF FIRE DO NOT USE ELEVATOR." some wag added "Use water instead." Inside the ductwork at the same plant, doing the final inspection prior to startup. I found a well stocked crib with a mattress, cardboard box bookcase, a collection skin mags, and an electric drop light. Above the crib scrawled on the duct, "If you found this place, you must be goofing off too."

Not only does Alpha Centauri only have three stars, it's also infested with mindworms.
Nasty creatures, mindworms.

Now to wait and see how many people actually got that reference.

I remember touring a space found in the bowels of a Spruance Class destroyer. One reached it through the CHT pump room aft. It was kitted out as described above and it was not on a single drawing of the ship. It simply wasn't there unless you went and physically looked between the shaft alleys.