I was amazed to see this photograph on Gab yesterday (clickit to biggit): 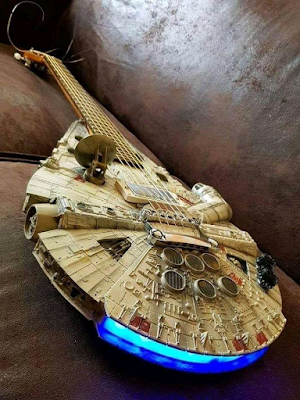 Yes, it's a Millennium Falcon electric guitar!  Intrigued, I did some searching, and found that examples have been produced by several individuals over the past decade or so, using a plastic model of the spaceship produced in the 1980's and 1990's as a foundation.  Here are a few links:

I don't know which version is involved in this video, but here's one proud owner.  Love the R2-D2 head!

One version of the guitar cost over $700 from this source, but it was far from alone as Millennium Falcon merchandise;  they also offered appropriately (?) shaped chocolate molds, beds, bottle openers, ice cube trays and many other tchotchkes.  I've no idea how many are still available, if any.

If you want to create your own Millennium Falcon anything, based on a plastic model, two large examples are still available:  the 'classic' Revell kit (formerly the Finemolds kit), and the 'perfect grade' Bandai kit.  Be prepared for lots and lots of assembly and painting!  Of course, if you don't want to assemble it yourself, or take that much time over it, there's always the two-and-a-half-foot, fully assembled Hasbro toy . . . 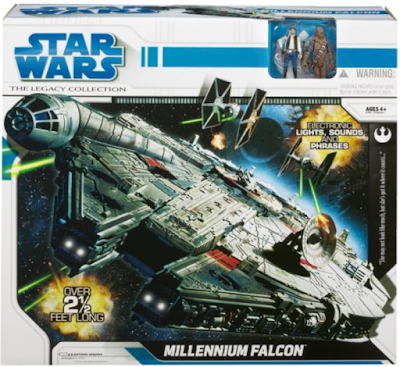 Boys and their (expensive) toys indeed!

Tip your waitresses. Try the veal. I'm here all week.

The MF wants to be a house, not a guitar.
Someday, when the powerball gamble pays off...