This morning's headlines about the latest Ebola outbreak in the Congo make grim reading.

Butembo, with more than 1 million residents, is now reporting cases of the deadly hemorrhagic fever. That complicates Ebola containment work already challenged by rebel attacks elsewhere that have made tracking the virus almost impossible in some isolated villages.

“We are very concerned by the epidemiological situation in the Butembo area,” said John Johnson, project coordinator with Medecins Sans Frontieres in the city. New cases are increasing quickly in the eastern suburbs and outlying, isolated districts, the medical charity said.

This is by far the largest deployment of the promising but still experimental Ebola vaccine, which is owned by Merck. The company keeps a stockpile of 300,000 doses, and preparing them takes months.

“We are extremely concerned about the size of the vaccine stockpile,” WHO’s emergencies director, Dr. Peter Salama, told the STAT media outlet in an interview this week, saying 300,000 doses is not sufficient as urban Ebola outbreaks become more common ... The prospect of a mass vaccination in a major city like Butembo has raised concerns. Salama called the approach “extremely impractical.”

This Ebola outbreak is like no other, with deadly attacks by rebel groups forcing containment work to pause for days at a time. Some wary locals have resisted vaccinations or safe burials of Ebola victims as health workers battle misinformation in a region that has never encountered the virus before.

Take a look at where Butembo is situated in relation to surrounding nations. 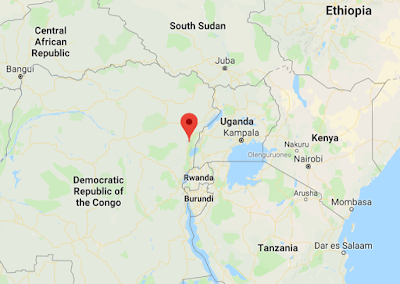 The city is right smack bang in the center of central Africa, the equatorial region, the Great Lakes of Africa, the dense tribal populations of the jungle and mountain region . . . you're talking probably half a billion people living in the area shown above.  The place has few main roads or rail links, and thousands of miles of bush roads and animal trails along which people can move unseen and unchecked - unstoppable.  It's absolutely impossible to criss-cross the area at any speed with the amount of medical supplies and facilities needed to contain this disease once it breaks out.

I've written before about the risks involved.  A million people are now in Ebola's melting-pot.  Already some will have fled into the bush, and will be making their way across inter-tribal boundaries and international borders.  Based on my knowledge of the area and its people, I no longer think this outbreak can be contained.  I hope the authorities are checking air travelers very, very rigorously, because if just a few get on planes to Europe and the Far East while carrying Ebola . . . hell's coming to breakfast.

The real death of Western Civilization by Ebola will be by infected health care workers and aid organization workers who fracking know better but are too scared and cowardly to suck it up and die on the front lines.

That, when we see a sudden rush of workers coming back to Civilization, will be the opening bell of the last round.

Game over, man. Game over.

@Beans: That sounds like a grim prophecy; I hope you're not correct - but I fear you are. (The book "The Hot Zone" was supposed to be a warning.)

In general, IMHO they'll first attempt to flee to Europe. China*, for example, will clamp down massively - at least I believe they will. But imagine an infectious black man getting off the plane and vanishing into, say, the migrant camps in Paris or London or Brussels. They'll have dozens of injected and contagious people before anyone even knows there's a problem.

* I was in China - Shenzhen - on business over the summer. Talk about no personal space; workers on the line (never mind housing) were crammed in shoulder to shoulder. Imagine someone slipping in and infecting a few persons before being found out. *shudder*

NITZAKHON - One must ask how many full quarantine hospital beds are in the USA? And in the last big outbreak both of them were full, of US aid workers, who knew better but still came back.

Yes, they'll hit Europe in the way you describe. But here in the USA the selfish ones who are virtue signaling by 'working' in a 4th World hell-hole will come screaming home and infecting us all. And this nation, and the rest of the world will die. Most worrisome is if it gets here in winter. Where everyone huddles together in hot, stiflingly hot, buildings.

And if you remember your history, the Black Plague was partially so horrible because it was a mini-ice age and everyone was huddled in close and had horrible hygiene because it was so damned cold. So, now we, in this country, have people who believe washing is optional, pooping and peeing in public is okay, who have no concept of personal space, no concept of preventative health care and who keep their homes and businesses and offices too damned hot.

So, yeah. We're screwed. Because of the selfishness of others we're screwed, blued and tattooed over this issue.

Kinda makes me glad I am childless. Which is truly a sad feeling.

IIRC Aesop did a very good analysis of available USA beds and so on.

There's a reason I have six months of food stored up. Survival level, but...

And yes, I worry about MY kids.

There aren't enough beds. And medical facilities aren't designed to be washed down and sterilized like they used to, back in the days of TB. It's hard to find a critical area of a hospital without cloth walls, or drop ceilings, or wall paper or carpet. Seriously. Carpet in a potential hot zone. Right.

Not to mention, the health industry isn't training seriously for this. It's just an ocean away and they're going all bureaucratic and human resourcish on training. Dang it. This stuff ought to be taught in High School, as the fundamentals are that darned easy. Clean, don't touch, burn what is dirty, don't touch. Soooo difficult...

In case of a major crisis both my wife and I are totally screwed. Why? Because we're only allowed BY LAW to have just over 30 days of critical, lifesaving medication on hand at a time. Ain't life grand? I can survive a crisis as long as it doesn't last too long. Too long, and we're both facing some painful times, potentially deadly times. Thanks, Obama et al.

Oh well, until then it's gonna be a fun and interesting ride.

Uggh this looks potentially ugly. No government has the guts to properly quarantine folks coming in from that region any more. And Ebola has a longish incubation period (2-21 days says Wikipedia) which would make the quarantine even tougher. And yeah the modern health workers are NOT like those of the late 19th to early 20th century who had to deal with thinks like yellow fever and tuberculosis that had a very bad prognosis.Catching something that is effectively a death sentence is outside their ken so they panic and make it worse. One good thing is that the Hadj (islamic pilgramage) is in August in 2019. At this point that could spread it EVERYWHERE in a couple weeks as there is almost no nation from which the pilgrims don't travel to Mecca. Very cramped living quarters an rituals ( including some flagellants from some sects if I remember right) would spread it everywhere . About the only thing worse would be the Spanish flu of the 1918 period coming back. Although that had a short incubation and killed quickly so might burn out before it spread too far.

"About the only thing worse would be the Spanish flu of the 1918 period coming back. Although that had a short incubation and killed quickly so might burn out before it spread too far."

Really? IIRC, back when it traveled by ship, it hit nearly every part of the world. There were only a couple small countries that stayed clear. However, it wasn't as deadly as Ebola. So, check the mortality rates of Ebola, and apply to the current world population. If it gets spread by airliners, there's going to be a lot of elbow room for people afterwards.

Pandemic experts have been saying for some years that the world is overdue for another big one.

Wait until the environmentalist whackos cram us all into megacities.

If you worry about your kids why wouldn't you give them the best chance possible of avoiding the disease... Which means getting out of any city with a pop of over 100k...Which means having a Community that's aware of the dangers and has a plan to mitigate it getting there and containment if it does...Maybe you do I hope so...

Well hopefully you know how to get around a bad law...

I already live far enough out that wandering around aimlessly will not likely result in finding my house. And if the fecal matter hits the air motivator the generator will be OFF - unless it's like 3 AM, and only then to refill the water tank from the well.

Might be a good idea to put a hand pump in so you don't have to worry about firing your generator up for life saving needs...

“We are extremely concerned about the size of the vaccine stockpile,” WHO’s emergencies director, Dr. Peter Salama, told the STAT media outlet in an interview this week, saying 300,000 doses is not sufficient as urban Ebola outbreaks become more common ...

So this guy is the WHO's emergencies director. He thinks the 300,000 doses Merck keeps on hand isn't enough. So why didn't he buy as many additional doses as he thought were needed, and stockpile them? Isn't it his job to figure out what needs to be done ahead of time, and do it? Instead his plan seems to be to give an interview to the press saying that more doses 'should' be stockpiled? If not by him, then by whom?

Problem is it's a fraggin' deep well...

A couple of years ago needed a new pump. The tech from the well company came out and said "Oh, I remember this one - sucky well!"