This looks far too good to eat


Seen on Gab this morning: 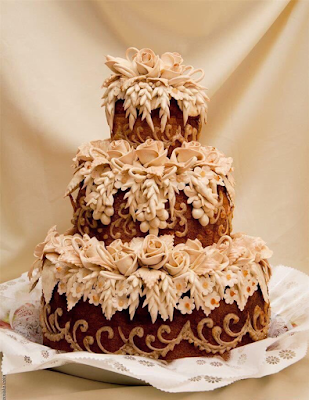 That's astonishing!  I'd never heard of korovai before, but Wikipedia has a lengthy article about it.

The bread was traditionally prepared in the home of the bride by women who sang traditional songs to guide them through the making. These women were called the korovainytsi (pol. korowajnice), and were most often invited in odd numbers to do the job of making the bread, usually seven.

The embellishments served a symbolic function. Two birds, made out of dough, represent the couple, and other birds represent family and friends. The entire arrangement is surrounded by a wreath of periwinkle, a symbol of love and purity. The korovai receives blessings before it is placed in the oven for baking.

The bride and groom were given the korovai as a blessing before the wedding ceremony. The korovai was shared by all the wedding guests, and this was considered the culmination of the wedding. During times of hardship, when a wedding was impossible, the blessing and sharing of bread was often considered enough to constitute a marriage in the eyes of the community.

I know it's a part of the wedding, and only a symbol of something much more profound, but even so, I'd hate to cut that bread, as beautiful as it is. That's not a meal, that's a work of art!

Peter,
I would say that that is the work of a master craftsman and meant to be used as intended. I say this as someone who is a baker by trade at this point in my life, I wish I was capable of putting out stuff that looked like this, I'd be crushed if it didn't taste as good as it looked. I am pretty sure the person who baked this feels the same.