Today the USA, and the US Navy in particular, remembers the attack on Pearl Harbor in 1941 that dragged this country into the Second World War.  There will be many words written and spoken about the solemnity of the occasion, and exhortations to "Never forget!".

However, there's another aspect to Pearl Harbor that we mostly do forget.  That's the enormous, complex, expensive salvage efforts that commenced almost at once, to repair as many damaged ships as possible and return them to the fight.  Many people don't realize how successful it was.  Of the battleships that fought and won the Battle of Surigao Strait in the Philippines in 1944, five out of the six US vessels involved had been damaged at Pearl Harbor, and subsequently repaired and restored to service.

It was a mammoth job.  The sheer scale of the damage was daunting. Here's USS Nevada after being refloated, coming into drydock in 1942.  She's a mess. 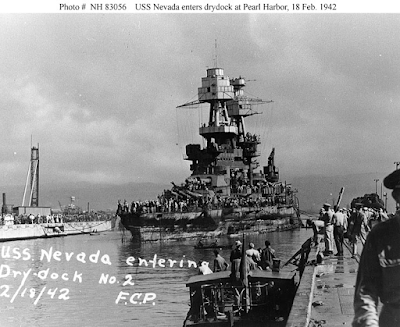 Nevada's sister ship, USS Oklahoma, seen below after being refloated in 1944, was an even bigger mess.  She never returned to service, but still had to be removed from her watery grave, because she was blocking access to valuable dockyard berths and services. 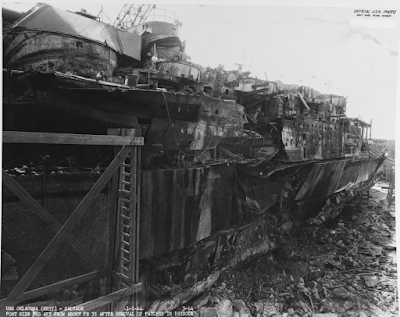 See here for an interesting overview of the salvage operations, which were not completed until after the war was over.  There's also a detailed book about the task:  "Pearl Harbor: Why, How, Fleet Salvage and Final Appraisal" by Vice Admiral Homer N. Wallin USN (Retired).  Recommended reading. 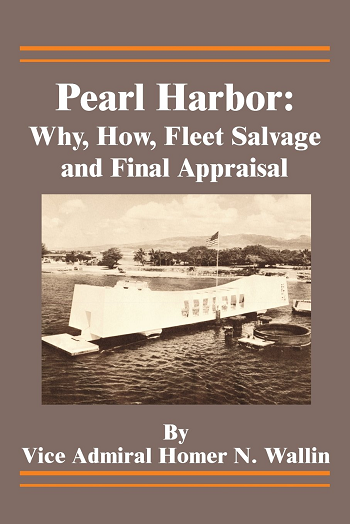 You can also read the book online in HTML format, if you prefer.

The salvors deserve to be remembered, too, on this anniversary.  They made a huge contribution to putting the US Navy back in the fight.

You can download a PDF that book for free at the Naval History and Heritage Command website https://www.history.navy.mil/

Pearl Harbor: Why, How, Fleet Salvage and Final Appraisal

Among several other books of interest at this site is a snappy title: A Plea in Favor of Maintaining Flogging in the Navy (circa 1840)

In addition to the above, I recommend "Descent Into Darkness" by CDR Edward C. Raymer.

It tells the story from the point of view of a Navy diver assigned to the rescue and salvage effort immediately after the attack.

The Island Hopping Campaigns of the Central Pacific would not have succeeded without the recovered ships.

Both a testament to the strength of the ships and the men who worked and lived on them.

And, CoastConFan, thanks for the links.

For those milhistory fans, both the US Army and the US Marines have good history resources online.

I constantly read the US Army's "Seizure of the Gilberts and Marshalls" as it is fascinating, in a horrible way to see the positive changes from Tarawa and Makin to the Marshalls.