A brand-new Airbus A321neo airliner, delivered only two weeks ago on November 14th, had an altogether too close - or, rather, too hard - encounter with the earth yesterday.

A VietJet A321neo lost both nosegear wheels during a hard landing at Buon Ma Thuot, with passengers and crew evacuating via slides.

Images ... show the aircraft with emergency slides deployed and its nosegear wheels completely shorn off. One image shows what appears to be the remains of firefighting foam under the right engine cowling. 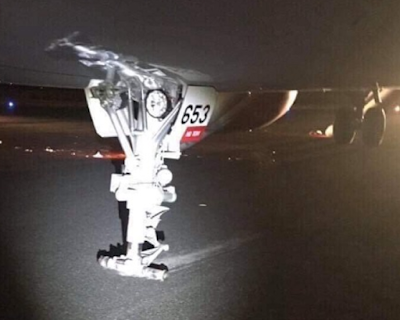 The aircraft was operating flight VJ356 on the Ho Chi Minh City-Buon Ma Thuot route when the incident occurred during the evening 29 November.

In a response to query from FlightGlobal, VietJet said all 207 passengers are safe.

That must have been quite a bang, to remove both front wheels like that.  The aircraft may even have landed at a nose-down angle, putting the nose gear on the runway before the main wheels.  That would almost certainly have overloaded the nose gear wheels by a significant margin.  A brown-trouser moment for all those aboard, for sure . . . I'm glad I wasn't among them!

What Rob said. That doesn't look like a hard landing issue.

Not sure why you'd use the slides in this instance as there appears to be no indication of fire are foam. People are always injured by slides and a lot of times by fire trucks.

Yep, odd that the NLG axles are intact. That looks more like the wheels separated 'voluntarily'...

Picture quality isn't good enough to be sure, but I agree with the other aviation pros' comments.

Hmmm... I wonder if it would be reasonable to put a short, solid skid at the bottom of the landing struts, extending just below the radius of the wheel rims, maybe with an ablative plastic coating to act as a single-use lubricant.

I'm thinking this would be a better solution in a lost wheel/blown tires situation than having the bare strut dig into the runway, possibly collapsing the strut and prang the old kite right in the how's-your-father.

Airbus uses spacers and rings as part of their assy process for the nose Landing gear. Someone forgot the spacers during the assembly and the hard landing popped the rings off then the wheels followed.

Some years ago, a smaller Cessna lost a main wheel on takeoff from Centennial, formerly Arapahoe County airport (KAPA). I was able to hear the pilot's comments on a scanner. He flew around a while to think about it, then did a successful drag-o-landing.