A devastating critique of the FBI

What the Federal Security Service (FSB) is to the internal security of the Russian state; so too is the FBI in performing the same function for the U.S. federal government.

The FBI are a U.S. version of the Russian “State Police”; and the FBI are deployed -almost exclusively- to attack domestic enemies of those who control government; while they protect the interests of the U.S. Fourth Branch of Government.  That is the clear and accurate domestic prism to contextualize their perceived mission: “domestic violent extremists pose the greatest threat” to their objective.

Put another way, “We The People”, who fight against government abuse and usurpation, are the FBI’s actual and literal enemy.

Let me be very clear with another brutally obvious example.  Antifa could not exist as an organization; capable to organize and carry out violent attacks against their targets; without the full support of the FBI.   If the FBI wanted to arrest members of Antifa, who are actually conducting violence, they could do it easily – with little effort.

It is the absence of any action by the FBI toward Antifa, that tells us the FBI is enabling that violent extremist behavior to continue.  Once you accept that transparent point of truth; then, you realize the FBI definition of domestic violent extremism is something else entirely.

The FBI is not a law enforcement or investigative division of the U.S. Department of Justice.  The FBI is a political weapon of a larger institution that is now focused almost entirely toward  supporting a radical communist agenda to destroy civil society in the United States.

It's a truly devastating article, amassing evidence of wrongdoing that's overwhelming in its cumulative damnation of the agency.  I can't possibly reproduce it all here, so I recommend very strongly that you click over to his place and read the whole thing for yourself.

If anyone still needed to be warned not to talk to any Federal law enforcement officer or agency unless in the presence of your lawyer, and with a recorder running, consider this that warning.  Remember, too, that making a false statement - deliberately or inadvertently - to a federal officer is itself a federal offence that can get you up to five years behind bars.  That's why you need your lawyer present, to analyze the questions asked and prevent you from saying something that might be interpreted as misleading or false, even if you didn't mean it that way.

Furthermore, considering their overwhelming presence at last Saturday's "demonstration" in Washington D.C., where police and federal agents appeared to outnumber the demonstrators, you should take it as given that if anyone - or any group - suggests, encourages or proposes anti-government action, the odds are very good indeed that they're federal agents provocateurs.  That applies particularly if they look like this, as photographed at that demonstration and memed by our friend Lawdog: 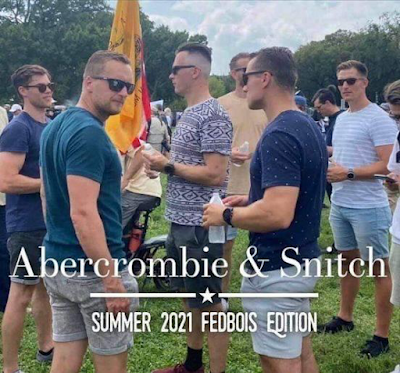 If Sundance is right, I guess "draining the swamp" in Washington D.C. is going to have to include abolishing the FBI as a whole, and probably much of the Justice Department with it.  The rot appears to have set in very deeply there.

"The rot appears to have set in very deeply there."

Yes indeed. This indisputable fact gives the lie to those like Hannity who continue to claim that "there are hundreds and hundreds of good and decent men at the FBI who despise the direction taken by the agency."

No there are not---not in the FBI or the CIA or the DOJ or the NSA. No decent man would work for such an apparatus of tyranny. Whenever an employee of these utters a mere peep of the slightest disagreement he is immediately attacked and financially ruined "pour encourager les autres".

These they do to their own. What would they do to the common citizen? Hmm...Waco and Ruby Ridge give the answer---and these were thirty years ago.

"I guess "draining the swamp" in Washington D.C. is going to have to include abolishing the FBI as a whole, and probably much of the Justice Department with it."

These organs of the State are all armed to the teeth. If ordered to disband they will not obey.

I would exercise my 5th Amendment Rights and not give them anything other than my photo ID. I was under the impression that if you try to record an interview session, they confiscate the recordings as evidence, and you don't get access to them.

I have stated before... I will sit in jail for obstruction before I allow them to snare me in a perjury trap.

That makes you "an enemy of the State"---the 'State' being the FBI of course. That also makes you a "domestic terrorist". And puts you on some Kafkaesque "list": You don't know why you're on it; you don't know how to get off it.

If the FBI wanted to jail you or ruin you, no Bill of Rights---recently the State said the Constitution "contains harmful language."---will stop them. So much for your rights.

Everyone else's as well.

Keep voting sheeple. This has been the norm for many years now.

There no controls on the FBI, CIA, NSA and many other intelligence agencies.

It has... All you have to do is look at what is being prosecuted and what isn't...

I believe there are good people at FBI. And they're nearly all pretty new, and if they're not soon corrupted, they're filtered out. I'm sure fewer and fewer decent people even make it through the hiring process now.

Justice, State and Treasury, especially the IRS and BATF-E (AKA F-Troop)
FIRE THEM ALL. If the next GOP President doesnt follow that advise, the Republic is gone forever.

Talk about timing! This article at "American Greatness" is titled:

"The FBI’s Incurable Rot: The bureau is an institution with no shame, no remorse, and no accountability. There’s no fix for that."

The FBI is a cheap, cut-rate KGB.