This is a lulu!  A member of Gab, "LadyWarAnon", writes:

Earlier this week, the NHS sent this form out to a majority of Primary and secondary schools (this is from my brother's) in the country for vaccination and tried to retract it minutes later, after they realized an Anti-Vaxx insider at the NHS had dumped a ton of redpills on the consent form. Imagine how much fewer people would take it given everything you read here. (I'm sure their still will be some who mindlessly sign.) But God Bless the insider at NHS who attempted there to at least warn people of the true changes of this thing.

And here's the form (clickit to biggit): 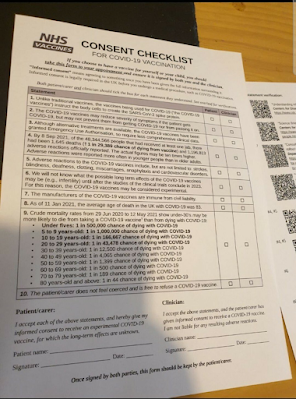 How anyone can read the very clear, distinct warnings in that form, yet go ahead and get their child (or themselves!) vaccinated, is utterly beyond me.  Thanks and congratulations to whoever designed and approved that form.  It's factual, rational and tells people exactly what they need to know.

Now, let's see if we can get a similar form in circulation here!

(EDITED TO ADD:  OK, I'm informed that several news sites have said this isn't real.  I haven't seen them for myself, but take the report above with a large pinch of salt, just in case.)

I dont think this is real. Healt personnel on an official form wouldn't use colloquial terms like "jab"

Several news sites state this is a prank.

This, Spartacus, was published on "Ace of Spades HQ" yesterday, September 29, 2021, in "The Morning Report". I read the whole thing and while some of it is a lot deeper than my medical knowledge goes it passed my BS-O-Meter test of being credible. It pulls together a lot of threads that have been discussed here and elsewhere regarding Covid-19 and the ongoing BS that is being created around it plus the dangers of the Jab. The pdf has disappeared from docdroid but I did save a copy from the above website

Maybe someone will gin one up hereabouts and start posting them on the walls and doors of jab clinics.

For Informational Purposes Only.

Do the numbers given match those available from the NHS and/or CDC? That's the question, surely.
Here're some: https://openvaers.com/ Good luck trying to get clear numbers from the NHS.https://www.gov.uk/government/publications/coronavirus-covid-19-vaccine-adverse-reactions/coronavirus-vaccine-summary-of-yellow-card-reporting#conclusion-1
The conclusion that "Vaccination is the single most effective way to reduce deaths and severe illness from COVID-19" doesn't seem to take into account the results from Spain https://market-ticker.org/akcs-www?post=243683
or Uttar Pradesh https://market-ticker.org/akcs-www?post=243599