More than 75 years old, but it still packed a punch

It seems that some Dutch explosive ordnance disposal specialists were called in to remove a World War II-era Panzerfaust rocket.  It was designed as a single-shot, disposable anti-tank weapon, similar to (but reportedly much more effective than) the US Bazooka or the British PIAT.  The image below, courtesy of Wikipedia, shows a Panzerfaust being prepared for firing. 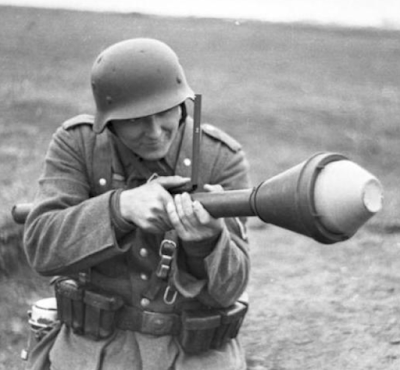 The EOD guys decided to see whether the old, rusted-up rocket would still be effective;  so they propped it up against the turret of an obsolete 1950's vintage M48 Patton tank that was being used as a target on a military artillery range.  Note that the M48's armor (as with most 1950's tanks) was still basically the same type as that used during World War II, although perhaps a little thicker and better sloped.  Here's how the salvaged rocket looked prior to its detonation. 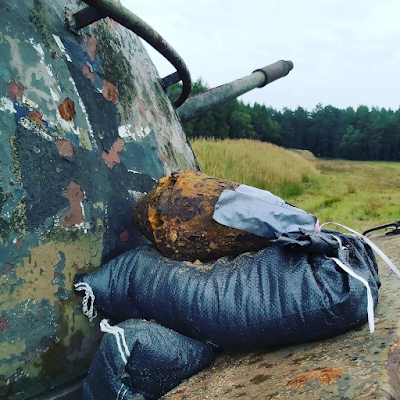 You'll find a slow-motion video of the explosion at Reddit.  Here's a screen capture of how it looked. 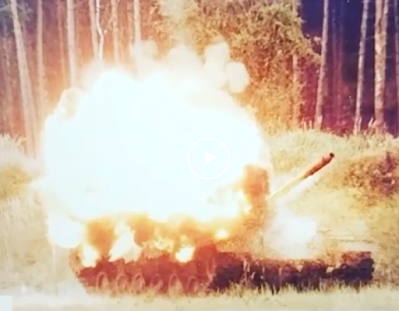 And here's a photograph of how the shaped charge of the rocket burned through the solid armor of the turret. 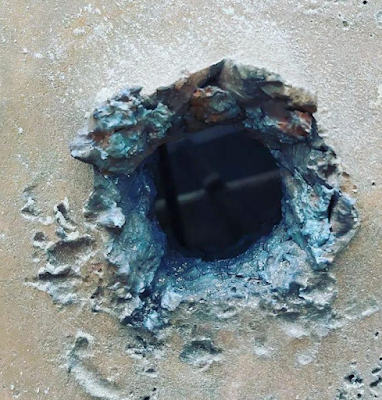 It doesn't take much imagination to figure out what would have happened to the crew inside, had there been one.  All that molten metal and spall flying around inside would have reduced them to charred hamburger.  More than 75 years after it was made, that rocket was still as lethal as ever.

Of course, any tank of that era was under-armored compared to the much more modern anti-tank weapons of later generations.  For example, here's a Soviet T-54/T-55 series tank, of similar vintage to the M-48, that met up with a first-generation South African ZT3 missile in Angola in the 1980's.  There's not much left of it. 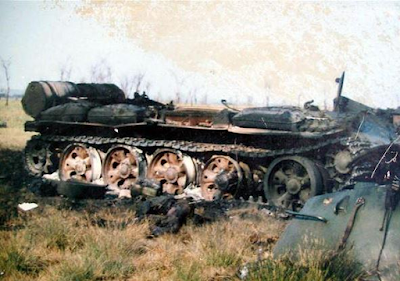 I saw that particular wreck in person.  Needless to say, nobody got out of it alive.

Minor correction: despite countless popular descriptions, shaped charges don't "burn" or melt their way through armor, they punch through it with kinetic energy.

Shaped charges are kind of fussy, so it's surprising one that visibly degraded was still able to do its job. Then again, they put it against a fairly thin section of armor. Maybe if they'd tried it against the glacis or turret front it would have only achieved a fraction of its rated penetration.

The blog software helpfully deleted the "pedant" tags I jokingly placed around the first sentence of my previous comment, so please don't take it as being as nitpicking as it sounds; this was very interesting to see!

Very interesting. The outside of the faust didn't make any difference to it's capability. Man, good to know. I still regard all armor as Tommy Cookers. Or Ronsons. Mobile foxholes just don't seem to work as good as dirt ones....

And yet tankers suffer significantly lower casualty rates than the Poor Bloody Infantry. Even if all else was equal, I'd rather ride than walk to war, and I'd much rather my weapon carry me than the other way around.

To add some numbers to the discussion: out of 936,259 total casualties for the US Army in WWII, the Armored Force suffered only 6,827. Of those, 1,398 were KIA (total dead, including those injured who later died of their wounds, numbered 1,518).

The vast majority of the dead and injured tankers were from combat in the European Theater. In the Mediterranean Theater, from Operation Torch to the German surrender, only 73 American tankers were KIA. 97 tankers were KIA in the Pacific. The other theaters are barely a rounding error.

Tens of thousands of M4 Shermans (the most common American tank by far) were knocked out, but by and large the crews were able to escape their damaged or destroyed vehicles with lives and experience intact, and many of the vehicles were able to be salvaged and repaired. The cumulative positive impact on maintaining unit effectiveness must have been tremendous.

Much better odds of survival than the bomber crews.

Even today, with the proliferation of antitank weapons on the battlefield, think of it like this : if you're an infantryman, every swinging Richard out there is carrying something that will kill you. If you're in a tank, what are the odds ? One in ten, thirty, one hundred ? It's going to take some special weaponry to get to you and not too many of the bad guys are going to have them.

I stand corrected. Ye gods and little fishes... I had no idea about the numbers. I'll do a check to verify accuracy. That is amazing.

They're from the postwar Adjutant General's report on US Army casualties. It's a fascinating document and breaks the numbers down in many different ways.

The penetration of a shaped charge against Rolled Homogenous Steel Armor (RHA) is approximately equal to its diameter, so it is no surprise that the thin turret side armor was penetrated.

The results inside the tank would be that any personnel in the path of the stream would be injured or killed, but the tank itself would not be destroyed because there is no ammunition in the path of the detonation (unlike that luckless T-55). The crew might bail out anyway and be subjected to deadly small arms fire.

Modern depleted Uranium rounds would totally destroy the tank crew with overpressure and thermal bloom as the penetrator would burst into flame.

Nitpick alert: the panzerfaust was NOT a rocket.  It was a recoilless gun.  There was a rod behind the warhead, with fins that folded out.  The tube itself was disposable, except for the last model, which could be reloaded.

Information from one of Ian Hogg's books, probably Grenades and Mortars, which also covers projectors like rockets.