"Never interrupt your enemy when he is making a mistake"

That's a quotation attributed to Napoleon Bonaparte.  One wonders if the US Department of Defense has ever bothered to read his works . . . because it's just made a very serious error of judgment, IMHO.

Lieutenant-Colonel Stuart Scheller, USMC, who famously resigned in protest over the lack of leadership and accountability over the Afghanistan debacle, has been arrested and jailed.  I understand it's because he disobeyed an order to stop posting on social media, but that's basically a convenient pretext.  We all understand that he's hated and loathed by the progressives who are trying to make the US military "knuckle under" to their authority.  I'm sure they'll punish LtCol. Scheller in accordance with the laws and regulations governing the military . . . but they appear to have lost sight of a very important reality.

LtCol. Scheller speaks for a great many Americans, and a great many military service personnel, in his anger at and rejection of a military leadership that's corrupt, inefficient and refuses to take responsibility for the consequences of its actions.  His jailing is bound to be seized upon as a cause célèbre, something around which to rally resistance to the entire corrupt military establishment.  That's already happening, as this meme I found on social media yesterday evening illustrates. 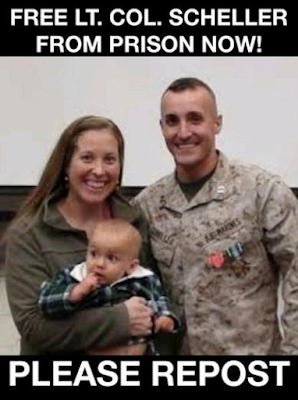 I'd say, if LtCol. Scheller wants a career in public office under a different administration, his open resistance to political correctness, and his willingness to go to jail for his beliefs, is going to stand him in very good stead.  Can you imagine the fun he'd have as a future Secretary of the Army, or Secretary of Defense?  I'm sure the powers that be can, if they apply their minds.

This is just about the dumbest thing they could possibly have done to handle the problem he represents.  If they had any sense, they'd let him fade away without further publicity.  Now?  They've just guaranteed that he won't fade away, but instead will be a stinging gadfly on their posteriors for years to come.  Tactically, he's won a major victory;  and strategically, he's positioned himself very well for the years to come.

One suspects Chesty Puller would approve.

I don't get it. I don't see how they have any legal standing to arrest him. It could be "the process is the punishment" and they know if gets to a civil court he gets released, they just want to hurt him in any way they can.

@SiG,
He submitted his resignation which isn't the same as saying "I quit" and you're gone. The service has to accept your resignation and then process it as they see fit. Back in the day (US Navy 1990s) officers had to give 9-12 months notice by submitting that letter and then you only got the discharge date you wanted if it was convenient for them. Some guys were given discharge dates 6 months or more later than what they asked for.

And that's assuming "they" are favorably inclined towards your request. Obviously not in his case. I read that "they" also ginned up some sort of mental health eval and were clearly trying to get an angle on him with whatever an MD might say about that, and they did give him an order not to use social media to talk about this. He broke that order (I think he was as right to do that as he was to make his initial public speech/video) but he is breaking the rules by doing that and clearly "they" intend to make an example of him.
I think LtCol Scheller's best outcome (let's cross our fingers) is where "they" will win in court and punish him for breaking the rules, but the obvious injustice of striking him down for impertinence will be far outweighed by the public's anger at the matter.
I am thinking of Ghandi and MLK for instance.
I hope that public support (some $ but mostly moral and mostly outrage at any public or government person who participates in this or supports it) will be enough to carry the day.

No, resignations have to be processed and approved.

My dad, a prominent theologian in his day, was asked to review "The Last Temptation of Christ". His comment was that if no one had commented on it, no one would have seen it or remembered it. It was that bad. As mentioned above, often the worst thing you can do is provide free publicity to someone's cause.

I have read on Michael Yon's post that Scheller has a drinking problem and that he posted that he was posting while drinking.
Neither one is a good thing.

My take is that this is being directed toward other dissenting active duty members of the American Military. They worry Our Dear Leaders more than the opinions of little people.

It might be interesting to read the discussion yesterday over at This Ain't Hell: Marine Lt Col who went viral speaking against Biden’s Afghan pullout arrested

Well, SO FAR, he seems to e camped firmly in the middle of their OODA loop. We shall see if this is still true in a few weeks, or not.

The problem for LTC Scheller is that if convicted by a courts martial, he will be a felon and all of the losses that go with that status. I don't know that in that case he can hold office in the government either appointed or elected.

The Marines can put him in the brig for failure to obey an order. He can decide to refuse Office Hours and thus force them to take him to Court Martial where he won't prevail because I'm sure his CO called him in to his office, counseled him and verbally ordered him to cease and desist and also documented that order with a written order that he had the LTCOL sign before he left the office.
It's a choice he made and really left the Marines no alternative. Orders must be obeyed in the name of good order and discipline and they have to punish and be seen to punish those who refuse to obey lawful orders.
Anybody who was in the service saw this coming weeks ago when he made the video. I haven't seen Yon's take on it yet but he came across as quite coherent when he made the video.
It's a standard from our friends in the Air force to send defaulters to the psycho guys for an eval. In the air force their pet psychos usually find the referred servicemember is crazy and recommend him for in-patient treatment in their tame psychwards. This was not the case in the Navy I was in.

Being a felon is no bar to elected office, even that of President.
There may be some appointed positions that have such a bar I suppose, but not elected ones.

Sadly he is Trouble to the scum in charge. Too many folks seem trapped in the idea we have RULE OF LAW in Amerika (spelling intentional).

The Scum in Charge will NOT ALLOW a potential George Washington to arise as a threat to them.

Allow me to expand on your thoughts on the topic:

Has anybody set up a legal defense fund for him? I'd like to contribute.

Donations for him and his family. And it looks like it will hit it’s $1M target. Glad to say I helped.