The gender insanity of the progressive left

Earlier this month Rep. Alexandria Ocasio-Cortez, notorious for her birdbrained pronouncements, went particularly avian over the issue of who can menstruate, with this tweet. 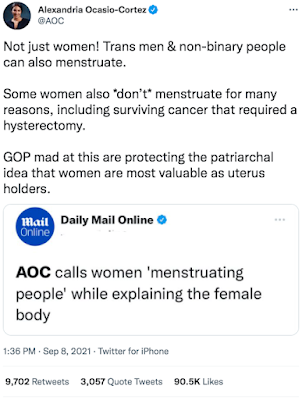 Ocasio-Cortez isn't the only public face fighting for more trans- and nonbinary-inclusive language. In 2019, the brand Always removed the female symbol on its products to be more inclusive to non-female-identifying customers. Similarly, several trans-affirming period brands have increased their visibility online to raise awareness for non-cisgender menstruators.

But as companies and public servants have debates around ideology and terminologies, folks like A.J. Lowik, a nonbinary activist and researcher at the University of British Columbia, says the erasure of trans and nonbinary folks from the period discussion is having real-life impacts.

“We are dealing with erasure at the level of information,” Lowik (who uses they/them pronouns) tells Yahoo Life. “We know very little about trans and nonbinary people’s menstrual health and menstrual health care needs.”

Canela López, an activist and journalist who covers trans health for Insider, agrees, adding that because menstruation is viewed only as a “cis woman’s issue,” access to adequate health care is compromised by major health agencies and is left “unaddressed.”

“For somebody who's been on testosterone, menstruation is maybe going to look a little bit different,” López (who uses he/them pronouns) tells Yahoo Life. “Somebody who is looking to get off HRT [hormone replacement therapy] to get pregnant, that's going to look a little bit different than somebody who hasn't been on HRT before. Those are really specific questions that can really only be answered by a doctor, but because there isn't research there, it's really difficult for a lot of trans people who are looking to either get pregnant or just get very basic care.”

My response to all that drivel is to restrain myself from throwing my screen at the wall.  Instead, may I suggest a very straightforward, very direct, accurate and scientifically irrefutable solution?  It's this:

In human beings, only a woman can have a uterus, and only someone with a uterus can menstruate.  Therefore, anyone needing any medical care regarding their uterus, or menstruation, or anything else to do with that organ, should be treated as a woman.  Anything else ignores medical and biological reality.

There you go.  Short, sweet and simple.  End of controversy, end of worry, end of problem.

To pander to someone's mental delusion, or politically correct pontificating, or psychiatrically disordered imagining, that they have a uterus when they don't, or don't have a uterus when they do, is utterly absurd.  As for "Somebody who is looking to get off HRT to get pregnant" . . . verily, the mind doth boggle.  They want to stop living their warped, twisted fantasy in order to start reliving their biological reality - and then expect to go back to their fantasy afterwards???  And they expect us to help pay for this, through taxes that fund health care systems?  Oh, hell, no!

I'll gladly help any medical need based on reality.  If it's based on fantasy, lies and disordered, distorted, warped imagination . . . no.  Not out of my taxes, and not out of my wallet!

The fact that government officials are proclaiming this shit...

God is mad at us, and I don't blame Him.

I think the Y chromosome has about the final word of gender identity. Otherwise Clovis Ledbetter really could have become a log truck:

All About Clovis Ledbetter
https://www.youtube.com/watch?v=xDNWmEM4a2U

I bleed, but only when I cut myself by accident...

All you need to do is watch Kindgergarten Cop. Boys have a penis, girls have a vagina.

That little kid is smarter than the entire left put together.

People coming in with this complaint are immediately labelled as delusional psychotic by medical staff, and then questioned to see whether they meet the criteria for a mental health hold, or not. If not, they are discharged in haste, with a diagnosis of non-emergent psychosis.

Your garden-variety loss of a grip on the bonds of reality does not constitute a requirement that medical professionals share your delusions, nor feed them.
We had one identified as "her" who tried to sign in for 'women problems', until the EMR wouldn't populate the space where we'd normally record a POC pregnancy test, and it wouldn't let us. A bit of checking in the chart confirmed that the computer, not being delusional, correctly defined Sheila as Steve, based on prior records, and despite a name change. Thank a merciful omniscient hard drive.

Quick mental health status exam, d/c'ed in about a minute. Total waste of time and paper.

Play your fantasy games in the bedroom, or even in the public square, all you want. IDGAF as long as it isn't picking my pocket nor demanding my assent. But when you come to medical practitioners spouting outright delusional psychobabble, you need professional mental health intervention, and you're going to get it good and hard.

More proof, if you needed it, that Evita Guevara-Castro is what happens when the borderline retarded kids who ate lead paint chips and craft paste grow up, and then make it to congress.

Of course AOC isn't the only pol getting tied up in knots over this. In the UK the labour party (which is full of AOC types) has got itself in some mess about people with cervixes which I haven't followed the details of but seems to have started off with some variety of good old sexism by men who call themselves women against actual women

Welcome to the end stage of civilization - arguing that dogs are cats and . . .

"When I use a word," Humpty Dumpty said, in rather a scornful tone, "it means just what I choose it to mean- neither more nor less."

They should just say normal then. Nothing wrong with the word normal as far as I know.